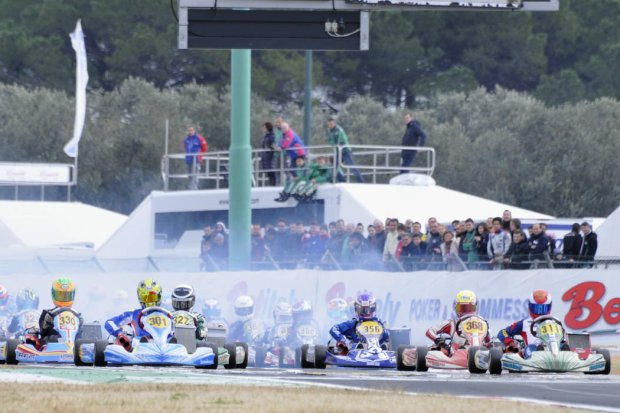 La Conca is the venue of the first round of the WSK Euro Series. 210 entrants from all around the world. On Sunday, March 3, the Finals will be streaming live on WSK.it and StopAndGo.tv , and a second broadcast on Rai Sport 2 on March 4.

Once again the International Circuit La Conca is in the limelight. After the excellent first round of the WSK Master Series just a month ago, this time Muro Leccese is the venue of the European series: the first round of the WSK Euro Series is ready to set off with its first out of four rounds of 2013 season. Next weekend, from 28th February to 3rd March, the southern Italian circuit (in Apulia, the heel of the boot) is waiting for the 210 entrants from all around the world to come.

SEASON 8 FOR THE WSK EURO SERIES

The European International Series, which WSK Promotion started in 2006, begins, this year, with its 8th racing season. Since then, 33 events have been organized for the race to the European title. This year too, the Series involves the most important European Circuits, in a calendar which goes from March to the beginning of June: the colourful world of karting, in these months, will be travelling between Italy, France and Spain. To get ready for this new season, on the 1,250 metre track of La Conca, the most important International team are already on the circuit to run some tests.

40 FLAGS FROM 4 CONTINENTS IN MURO LECCESE

WSK Euro Series features the four international categories KZ1, KZ2, KF and KF Junior, besides the 60 Mini, which allows very young drivers – aged 10 – to drive. In this 5 categories there are 210 entrants and. once again, the number of countries they all come from is outstanding: more than 40 countries of 4 continents. From very far away countries, such as Australia and Japan, Argentina, Canada just to mention some of them, all the world of karting is in Muro Leccese, ready for the first challenge of 2013 season.

WSK CAMERAS FOR A 10-DAY TV COVERAGE ARE READY TOO

From Wednesday 27th February, with the WSK TV Magazine of Rai Sport 2, which from 4:55pm to 5:15pm will broadcast the highlights of the first weekend of the WSK Master Series – which took place last 3rd February in La Conca. On Sunday 3rd March, from 11:20am, live streaming on the official website www.wsk.it and on the specialized website www.stopandgo.tv: they will broadcast images of the whole final phase from Muro Leccese. Rai Sport 2, then, will broadcast the Finals of the WSK Euro Series on Monday 4th March from 9:00pm to 9:30pm. Finally, on Friday 8th March, once again on Rai Sport 2 another WSK TV Magazine broadcast, this time dedicated to the first opening race of the WSK Euro Series.