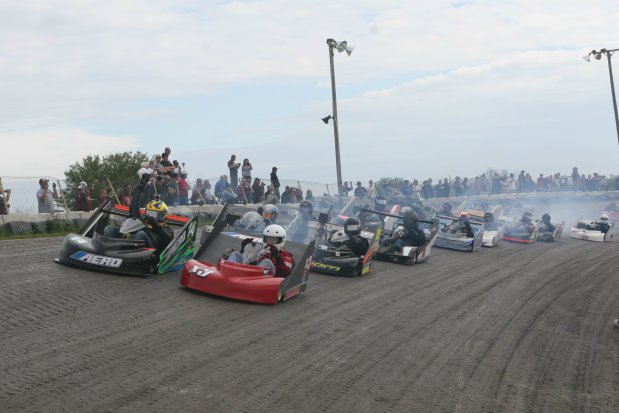 After several years of promoting a 2-cycle Pro Open category, the Rock Island organizing committee has now thrown the doors open to any kind of engine. The Pro Open class has adopted the technical rules of the Unlimited All-Stars. It will not be sanctioned by UAS, but the organization is urging drivers to participate. AT&T and Casey’s General Stores are presenting sponsors of the Rock Island Grand Prix.

“The idea behind the class was to get racers to think outside the box — an element that helped the sport develop in the first place. We have had some success, but not enough to sustain it,” said Roger Ruthhart, president of the Rock Island Grand Prix. “We have had some interest in running 4-cycles, Wankels and duals in the class, so we sought an existing rule set that would allow that and settled on the Unlimited All-Stars technical rules. We hope this move will encourage the growth of the class.”

The Unlimited All-Stars was originally created in 1990 to preserve the then-dwindling open class on the dirt tracks in Western Pennsylvania.  For quite a while, the Unlimited All-Stars concept was only applied there.  In 2001 the concept was tested on tracks in Florida.  As a result of success there, it later spread to Arizona, Georgia and the Carolinas.  It has continued to grow and as of this writing there are 22 officially recognized circuits across the country and it is very likely that there will be as many as 25 that start up in 2013. The national Unlimited All-Stars season culminates with the annual UAS Muscle Kart Grand Nationals. This year that event will take place at Lasoski Speedway, Warrensburg, Missouri, on Sept. 13-15, where the organization’s seventh national champion will be crowned.

The Unlimited All-Stars (UAS) is a national club that represents a single class for kart racing that combines a wide variety of engine types.  Those engines are limited only by their maximum displacement; otherwise there are virtually no limits to permissible modifications.  The class was developed primarily for competition on short dirt oval tracks although the rules have been applied successfully on other tracks as well. These karts are capable of a very high level of performance and therefore the class is intended only for experienced drivers who have proven themselves capable of safely competing in a sportsman like manner.

“Implementing the UAS concept requires a shift in thinking to pull it off.  Outsiders are attracted by the openness of the rules, but it is the camaraderie and sportsmanship that really makes it work and keeps it safe,” said Mark Bergfelt, executive director of the UAS. “Those parts of the program are absolutely essential to making this work.  Whiners, nit pickers and finger pointers should be discouraged from getting involved.”

Ruthhart suggested that the festival atmosphere of the Rock Island Grand Prix would provide a great opportunity for this class to flourish and running in front of hundreds of karters and thousands of spectators will be great exposure for the Muscle Kart program, he said.

Due to its nature, the Unlimited All-Stars is not a class that everyone will want to participate in. Racers who are eager to try new and sometimes radical technical ideas will feel right at home in the UAS, said Bergfelt. The rules contain a set of parameters, and emphasize safety but were intentionally written to allow and encourage innovation.

Basics of the engine rules:

* Piston port 2-stroke: 170 lbs. plus one pound for every cc. Multiple engines or cylinders are permissible. 225cc maximum displacement. Single cylinder from 226-255cc is allowed at 430 lbs.

If a kart is equipped with turbocharger or nitrous oxide, add 15 lbs. for each cylinder served by the system.

(Note: If there is any discrepancy between this description and the actual rules, the rules take precedence.)

UAS rules do not prohibit gearbox karts, but Bergfelt said that in most situations he is familiar with shifters are at a disadvantage against a Muscle Kart.

Ruthhart stressed that those considering entering the class should review the entire rules package, plus any Local Option Rules which will be posted soon on the web site at rockislandgrandprix.com .

Complete Unlimited All-Stars Rules can be found at unlimitedallstars.org/rules.html

While Muscle Karts generally run on dirt ovals, the adjustments to run at Rock Island will be relatively minor since there is only one right-hand turn. It is an open track with long straights which will allow competitors to really stretch out their machines. In order for sprint racers to compete, they will simply have to fall within the UAS technical regulations.

“This will be our last effort to promote open class kart racing. We hope racers will support it and it is successful and we are excited to be able to expose our racers and race fans to the thrills of Muscle Kart racing,” said Ruthhart. “At the very least, the UAS rules provide a framework where nearly any engine can compete in the Pro Open class at Rock Island. But we also hope to be able to showcase the Muscle Kart program, see how they adapt to street racing and how other Pro Open drivers adapt under the new rules.”

A complete list of classes to be run at the Rock Island Grand Prix in 2013 will be announced soon.