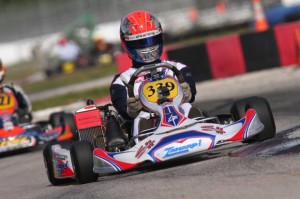 Steven Szigeti will be back in his SH-Zanardi package taking on the Rotax Senior class in Homestead
(Photo: SHKarting.com)

SH Karting, the exclusive Canadian importer and distributor of the Zanardi Kart chassis line, is set to take on more Rotax racing this coming weekend in Homestead, Florida. After starting off their 2013 campaign at the opening weekend of the Formula Kart Productions Florida Winter Tour (FWT) back in January at the Palm Beach International Raceway (PBIR), SH Karting will now turn their attention to the 7/10-mile permanent sprint course of the Homestead Karting Complex. Three drivers will make up the talented squad for the SH Karting/Zanardi team and will look to put SH in the limelight in sunny Homestead.

Leading the SH Karting team is 2012 Florida Winter Tour Rotax Senior Vice-Champion Steven Szigeti. A regular under the SH banner, Szigeti’s start to his 2013 campaign in Palm Beach saw the eKartingNews.ca #1 ranked Rotax Senior with a DNF and 16th place finish. Looking to regroup and put his Zanardi Kart in contention for podiums and wins in Homestead, Szigeti can never be ruled out. The 2011 Canadian National Champion certainly has what it takes to battle the ultra-competitive, international Rotax Senior field as Szigeti’s smooth, calm on-track demeanor has racked up countless championship titles and race wins during his storied career.

Joining Szigeti in the Rotax Senior ranks is Cornwall, Ontario native Derek Michaud. Making his return to the national karting scene with the Mont-Saint-Hilaire, Quebec-based powerhouse karting operation, Michaud will look to have a solid run aboard his Zanardi chassis.

Completing the SH Karting roster for the Homestead event is Rotax Micro Max pilot Thomas Nepveu. A frontrunner in Canadian regional action, Nepveu will be making his Florida Winter Tour debut. Running a limited schedule in the 2012 Eastern Canadian Karting Championship (ECKC), Nepveu narrowly missed the podium at the prestigious Le Monaco de Trois-Riveries in 2012. With the Micro Max pilots always putting on racy battles in FWT action, look for Nepveu to be right in the mix despite his rookie status.

SH Karting drivers will be on track this week leading up to the start of official on track action Friday, February 22. Two qualifying sessions on Friday will set the grids for the weekend’s wheel-to-wheel action at the Homestead Karting Complex. Live video, timing and scoring, as well as audience interaction is available for each Florida Winter Tour weekend via the FWT Live! Broadcast page: floridawintertour.com/fwtlive/2013