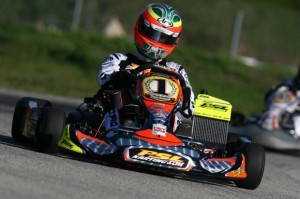 After taking both feature wins in the Rotax DD2 class with reigning World Champion Cristiano Morgado in West Palm Beach, Team PSL Karting will be back in action this weekend looking for more race wins and podiums. Heading to the Homestead Karting Complex for rounds three and four of the 2013 Formula Kart Productions Florida Winter Tour (FWT) Rotax weekend, Team PSL Karting will see 13 talented drivers in action across six classes. Always a threat every time they are on track, Team PSL Karting drivers will look to rise to the top at the 7/10-mile permanent sprint circuit located on the grounds of the Homestead-Miami Speedway.

A host of drivers will represent Team PSL Karting in the competitive Rotax DD2 Masters field, led by three time Rotax Max Challenge Grand Finals (RMCGF) World Champion Cristiano Morgado. The South African swept the two final races at the opening weekend in January, and will again try to put his #1 plate in the top position during the Homestead event. 2010 Rotax Masters World Champion Scott Campbell joined Morgado on the Saturday podium at the Palm Beach International Raceway before narrowly missing a second trip to the block after finishing fourth on Sunday. The duo is currently one-two in points heading into the second of three rounds. Joining the potent DD2 Masters contingent for PSL Karting is 2012 US Rotax Grand Nationals Vice-Champion and three-time Team USA member Rene Martinelli. No stranger to FWT competition, Martinelli made two trips to the podium during the 2012 Homestead round as he scored second place honors during Saturday’s competition and then the win on Sunday. Completing the DD2 Masters line up for PSL Karting/CRG is Salvatore Bortoni and Andre Fonseca. In the Rotax Masters category, Brazilian Francisco Marques will be back in action after earning a third place podium finish in Palm Beach.

New team recruit Jesse Lazare will be back to take on the Rotax DD2 category with Team PSL Karting. Lazare was a recent podium finisher in the USF2000 Winterfest series, and will now look to podium in the karting ranks as well. Joining Lazare is 2012 Pan American Champion and karting standout Collin Daley. The Jamaican pilot represented his country at the 2012 RMCGF and will look to give his competition a run for their money in Homestead.

Two American pilots will be back with Team PSL Karting in the Rotax Senior class, as Fritz Leesmann and Jesus Rios Jr. are set to take on the stacked international fields the FWT offers. Both will look to improve upon their top-15 finishes from Palm Beach, and will up their game in an effort to put PSL/CRG on the podium in the ultra-competitive Rotax Senior category.

In Rotax Junior, Brazilian standout Pedro Cardoso will be back behind his PSL powered machine. Coming off third and fourth place runs in the TaG Junior category during last weekend’s Formula Kart round, the 2012 FWT Mini Max champion and Brazilian National Champion is certain to have his sights on winning during his second consecutive weekend in Homestead. Fellow Brazilian Gustavo Bandeira will complete the Junior line-up for Team PSL Karting while Sebastian Alvarez will be the lone pilot in the Rotax Mini Max class.

Team PSL Karting will be on track throughout the week leading up to Friday’s official qualifying sessions, which set grids for Saturday and Sunday’s wheel-to-wheel action. Live video, timing and scoring, as well as audience interaction is available for each Florida Winter Tour weekend via the FWT Live! Broadcast page: floridawintertour.com/fwtlive/2013