Street racing is a rare form of motorsports across the country and around the world. Monaco, Singapore, Long Beach and Le Mans – all have their own history, uniqueness and glamour that make them a unique destination for motor racing. Karts on a street circuit have been taking place for many years, and always sparks interest no matter what area you are from. The upcoming Lone Star Grand Prix is looking to build its own history when karts hit the streets of Texas on March 2-3.

The Lone Star Grand Prix will be held this year in Lockhart, Texas, located roughly 25 miles from Austin and the new Circuit of the Americas Formula One facility. Since securing the new location for the second year event, the city of Lockhart is behind the LSGP 100%. The city is hosting a festival on the same weekend, hoping to attract over 40,000 people to Lockhart for a number of activities, live music and other events in addition to the Lone Star Grand Prix.

“Like all small Texas towns, it seems like there is a racer on every block. It is not unusual to see some form of race car or hot rod in what seems like two or three garages on every block,” stated Lone Star Grand Prix’s Robert Miller. “Many of the folks at The City who have helped us prepare for LSGP are racers, pit crew members or racing enthusiasts of one form or another. Lockhart has also followed the Rock Island Grand Prix and what a great job they have done there for the last 20 years. The Circuit of the Americas has certainly put racing on the radar of the media in Central Texas. That is a good thing for all forms of racing, including the LSGP and Lockhart have already benefited from it.” 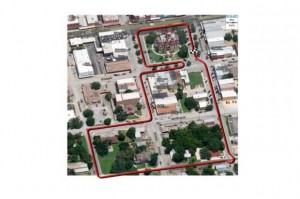 The course for the Lone Star Grand Prix maps out to approximately 7/10-mile, right in the heart of the Lockhart city. The class structure for the LSGP will host a diverse lineup of 10 classes over the two days; Stock Honda Light/Heavy/Junior, 125 Modified/ICC, TaG Senior/Masters/Junior/Cadet, KT100 and Chonda (known as Clone to most organizations). Racers will have just two days to conquer the streets of Lockhart, with practice taking part Saturday morning, with qualifying and the Prefinal set for the afternoon. Sunday will host the main events, scheduled to begin at 11am local time. Numbers are close to the 200 mark, which should be about a 20 drivers per class average. Some of the classes will see higher numbers, such as the Stock Honda Light and Heavy categories along with TaG Senior and TaG Masters.

“Racers are coming from 14 different states, as well as Mexico, Bermuda and Columbia,” added Miller. “I believe those numbers come from a combination of things. It’s a new event which always peaks racers’ curiosity. But more importantly, Lockhart is a great venue with smooth streets. The competitors find the circuit layout interesting and we have appreciated all of the feedback from racers on the circuit. It is invaluable. Early indications are that we will have a lot of spectators. The festival that accompanies the LSGP includes four live music venues, multiple food and alcohol vendors and arguably the best BBQ in the State of Texas. That is good for many reasons. The most important is that it introduces kart racing to the general public. That is one of the greatest challenges in our sport. Most folks have no idea what kart racing is. Racers also like to race in front of folks. It looks likes that will happen for them.”

Another perk for competitors racing at this year’s Lone Star Grand Prix event is the ability to view the Become One premiere Friday, March 1 during event weekend. Home Town Cinema will host the event before the karts hit the track Saturday morning. Since last summer, Texan John Shofner has worked with the karting community and industry to raise money and develop a documentary surrounding the sport. If the footage seen in the trailer (http://vimeo.com/johnshofner/becomeonetrailer) is any indication of what the film will be, it surely is something every karter can take to their non-racing friends to demonstrate the love they have for karting.

The Lone Star Grand Prix will also be broadcasted live on the web via the services of Kart Racing Network, allowing those unable to attend the event to view it live from their laptop while at home. LSGP is still taking entries leading up to the event, with at-track registration available as well. For more information, visit www.lonestargrandprix.us or find them at Facebook.com/texaslonestargrandprix for continuing updates.