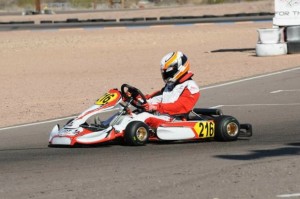 ART Grand Prix America entered ten drivers over the last two weeks, with four taking part in this winter’s second round of the Challenge of the Americas championship and six in the opening race of the Tri-C Karters season. The Challenge of the Americas event took place at the challenging Formula K Raceway in Phoenix, Arizona. Looking to continue to ride the momentum from the strong opening rounds the team was confident success would follow them out of California. Brenden Baker and Phillippe Denes arrived Thursday for unofficial testing and were near the top of the Rotax Jr. times right away. Denes would continue to improve over the two days of testing and would time in solidly in the top 10 in the official sessions, a huge improvement over where the first year driver was just a month ago in Tucson. For Baker, engine issues would become the theme of the weekend as the 14 year old Palmdale competitor was consistently the fastest driver through the infield, but was losing a large amount of time on the long back straightaway. Steve and Andrew Wiener arrived Thursday evening. Steve had a solid practice day Friday, while Andrew battled more severe engine issues most of the day leading to a late engine swap and renting an engine for the final practice session.

Heading into the first race day, the team was confident in the drivers and chassis, but engine questions still remained. Qualifying kicked off and Brenden Baker again showed why he is one of the best young drivers in the country as he intelligently used the draft to help his struggling engine and was able to time in 3rd. Also, impressing was Denes qualifying in 9th. Luck in the prefinal quickly turned as Baker suffered a flat tire early in the race when a competitor’s nose clipped the inside of his rear wheel, breaking the bead locks. Running a smart race Denes was able to finish 8th and would be in great position to land his first top 10 of the season. Time for the final arrived and Baker would be coming from the back and put on a show. Starting from the 29th position, Brenden was able to climb his way all the way back to 10th by the end of the race, while still being visibly down on power. Denes drove a fantastic race turning in some of the fastest laps on the track and was able to finish 8th and secure his first ever top 10 at a national event. Andrew Wiener had a difficult qualifying session in Rotax Sr. coming up 23rd as the team was just beginning to set up the chassis after losing practically the entire day of practice Friday and a wet warm up session. Wiener would battle through the field to 12th in the prefinal. More changes for the final were in order, but the gap couldn’t be closed to the top 10 drivers and the San Diego pilot finished the day in 12th. Needing just about 2 tenths to the lead pack the team went to work to try and find the last bit of speed. Steve Wiener again found himself in a battle for the entire main event and ended the day in 8th place after making a late race pass.

Sunday saw massive changes as everyone came to the agreement to change an engine, carburetor, and adjust the chassis for Baker to try and fix the issue. The moment of truth came in qualifying and it appeared the issues had finally been solved. Baker qualified a very strong 3rd without ever having a clean lap. Denes struggled to find a drafting partner and never could get in a rhythm ending the session a disappointing 25th place, another lesson the young driver will remember for the future. Hopes were high for Baker to climb to the front of the field, but that quickly fell apart. After a huge turn 1 incident that brought out a red flag, Baker struggled to get the engine restarted. As he was catching back up to regain his place in the order, an incident occurred resulting in a bent axle and another last place prefinal finish. Denes was carving his way through the field, back up to 17th when he was involved in a crash where he had nowhere to go, also bending an axle. Two bent axles meant the final two rows heading into the final. With nothing to lose, both drivers put in spirited drives as Baker made some of the most exciting passes of any driver on the weekend to eventually cross the line in 4th place, a one position penalty would drop the driver to 5th in the final results, but a remarkable drive nonetheless. Denes would also be on a charge as he was able to climb his way back to 15th by the end of race. Andrew Wiener was able to finally crack the top 10 in qualifying after timing in 9th. He was in the lead draft when an aggressive move from another driver left him off line and he fell back to 15th. He was able to battle back to 13th by the end of the race. Wiener got a fantastic start in the final and found himself back in the top 10, but unfortunately the speed was still just a little short and he found himself again in the battle from 11th to 15th, ending the weekend a frustrating 13th position. Steve Wiener was moving through the field early in the Rotax Masters final running some of his best times on the weekend, but after two very long weeks of driving, the veteran found himself physically exhausted and couldn’t keep the pace throughout the final, coming home in 8th place once again.

The next week would see the team finally have a race close to their headquarters with the Tri-C Karters event at the Calspeed Kart Track. Baker, Denes, and Andrew Wiener would be using this race to gain a punch for the Rotax Grand Nationals later this season. Joining the team for the first time were Felipe “Pipe” Ceballos and Steve Wetterau in Rotax Sr and Gianfranco Casadei in the Shifter class. Baker would dominate the day in Rotax Jr. taking the pole, both heats, and the main event victory. Denes would run a very close 2nd to Baker all day with the two working better and better each week together, showing how strong a strong a team the two young drivers have become. In Rotax Sr, Wiener had worked his way up to 2nd in the second heat when a last lap incident pushed him back down the order. Getting involved in a first lap incident, Wiener fell out of the very talented lead pack and finished the day 5th. Ceballos finished the day a very strong 4th place in not only his first race with the team, but his first race as a senior. Having driven the chassis the first time the day before, the young Colombian improved all day and was battling for the victory before getting a bit tired at the half way point and falling back, something completely understandable as the driver hadn’t raced in six months. Wetterau was a magnet for bad luck all day beginning with his huge crash in the final practice which saw him upside down and thankfully uninjured. After scrambling to get the kart back together, mechanical gremlins followed him all day. Finally, the issues were straightened out for the main and he completed his first karting race and hopefully got all his misfortune out in one day. Casadei was the star of the day as the Brazilian pilot won the pole and led every lap of the day to bring home the victory in his first ever race in the shifter category. The team left the Los Angeles track with 2wins, 3 podiums and 5 top 5’s between their six drivers.

“It has been a very busy last two weeks! We have had a lot of ups and downs, a lot of long nights at the track and at the shop, but every week we raise our game just a little bit more. We have been able to show well on different tracks, different engine packages, and different tire compounds…all with the same chassis! I can’t thank all of the drivers, mechanics, and supporters enough for all of their hard work and continuing to push our program forward every day,” reflected Team Manager Kyle Kuntze.

The team will travel back to Calspeed for the opening round of the LAKC championship.
For more information about ART Grand Prix America and how to become an ART Grand Prix chassis dealer contact artgpamerica@gmail.com