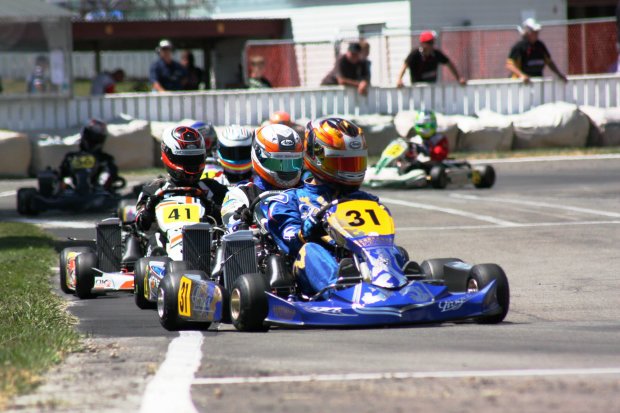 Auckland’s Kinsman brothers, Daniel and Mathew, led the Kiwi charge against a six-strong group of visiting Australian karters at the opening round of the 2013 YÖGG Rotax Max Challenge of New Zealand in Palmerston North on Saturday.

Continuing on from where they left off at the final round of the 2012 Challenge series the brothers dominated proceedings in the premier Right Karts 125cc Rotax Max Light class at the KartSport Manawatu club’s annual Twilight Trans-Tasman meeting, Mathew claiming pole position from fellow Aucklander Daniel Connor and younger brother Daniel Kinsman in qualifying, then Daniel turning the tables on Mathew to win all four class races.

Reigning Aussie V8 Utes title holder, and former States and National Australian karting champion, Ryal Harris qualified sixth and ran strongly in the heats and Pre-Final but slipped back through the field in the early laps of the Final before contact saw him tumble to 22nd place from where he made it back to16th place at the flag.

Christchurch driver Jordan McDonnell also kept the Kiwi ensign flying high in the Arai Helmets Formula Junior class, qualifying quickest and conceding only one race win – in the Pre-Final – to the Australian driver in the field, Lachlan McHugh. 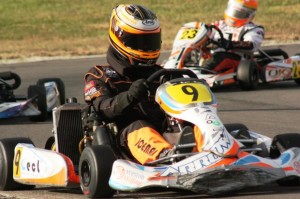 The visitors got their revenge in the Logitech 125cc Rotax Max Heavy class, regular New Zealand visitor Lane Moore qualifying quickest and sharing heat wins with fellow Aussie Michael Saller then winning both the Pre-Final and Final from Saller and the first of the Kiwis, local class stalwart Brendon Hart, the latter also taking Masters (over 32) honours.

Saturday’s opening series round is the first of six with subsequent rounds to be held at Rotorua, Te Puke, Tokoroa, Hawke’s Bay and Auckland.