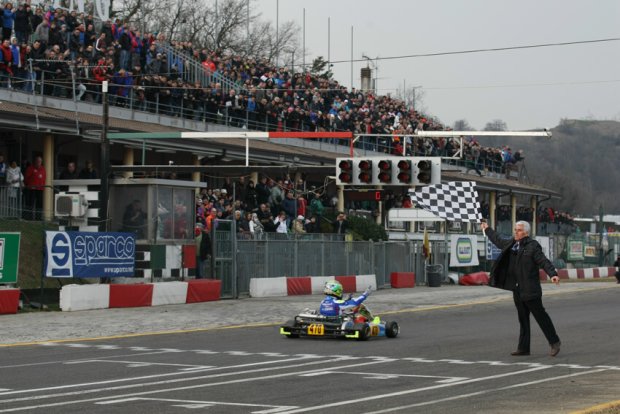 Alessio Lorandi crosses the finishing line of the KF3 Final

This year’s edition of the Winter Cup, the 18th, was particularly spectacular: the race on the south Garda had a rather unexpected epilogue. There were almost 250 entrants coming from all around the world and, thanks to their performance, this classic event of the beginning of season was particularly exciting. All the top manufacturers and drivers took part in the event.

In the most performing category, the hard-fought KZ2, it was the Italian Paolo De Conto (Birel-Tm) who finally won after a rather wild final sprint, which was made absolutely thrilling also by the slightly wet asphalt: the rain, in fact, started to fall right during the last laps of the race. 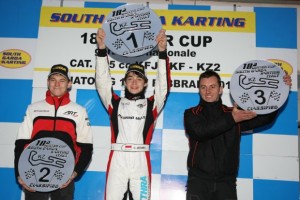 Anyway the winner, eventually, was Charles Leclerc (Art GP-Tm) from Monaco, given that at the end of the race De Conto was hit by a 5-second penalty because he was the responsible for a crash against Marco Ardigò (Tony Kart-Vortex) with two laps remaining, when the two were fighting for victory, also against Leclerc himself, the English Ben Hanley (Art GP-Tm) and Davide Forè (CRG-Maxter). So, the final ranking of KZ2 rewarded the two Art GP teammates Leclerc and Hanley who occupied the first two places, with Forè third after a good recovery over the Swedish Joel Johansson (Energy-Tm) – 4th. After the crash, Ardigò managed to continue the race and placed fifth. De Conto, who until then had won almost everything – including the Pre-final-, was classified sixth. Arnaud Kozlinski (Birel-Tm) was seventh before Antony Abbasse (Sodi-Tm), Andrea Dalè (CRG-Maxter) the Czech Patrick Hajek (Praga-Parilla). Several crashes characterized this final, such as the one which sent off the race Yannick De Brabander (Maranello-Tm), just when he had managed to reach the first positions after a good recovery; or the one which obliged Mirko Torsellini (Tony Kart-Vortex) to retire after he came in contact with Dalè.

In KF2 the superiority of the young Dutch driver Max Verstappen (CRG-Tm) in this Winter Cup was overwhelming, even though in the Pre-final he was obliged to leave the leadership – with few laps remaining – to the Danish Niklas Nielsen (Kosmic-Vortex). In the Final Verstappen had no troubles at all and won easily, also thanks to the tussle behind him. Eventually, with Verstappen always first, the runner-up was the excellent Armand Convers (Kosmic-Vortex), who carried out an outstanding recovery starting from the second-chance heats (where he won) and, then, from the eighth position of the Pre-final. Third the Croatian Martin Kodric (FA Alonso-Vortex). 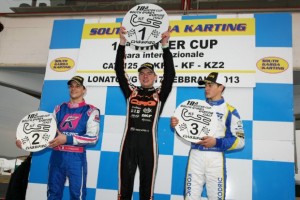 Max Verstappen atop the KF2 podium

In KF3, too, everything went as expected after the first two racing days of the Winter Cup. So, it was no surprise when the Italian Alessio Lorandi (Tony Kart-Vortex) dominated the category and won the Final after winning the Pre-final and, earlier, the qualifying heats. In the Final Lorandi preceded the Dutch Martijn Van Leewen (Zanardi-Parilla) and the English Dan Ticktum (FA Alonso-Vortex). David Beckmann (Zanardi-Bmb) achieved a good fourth place preceding Lando Norris (FA Alonso-Vortex) and the French Gabriel Aubry (Birel-Tm). Alessio Lorandi’s brother, Leonardo, at his debut in KF3, placed 12th after the second-chance heat.

Five North Americans competed in this year’s event, with all making the main events in their respective categories against some fierce competition. Canadian Zachary Claman DeMelo (CRG-Bmb) was the top driver in KF3 after the multiple heat races. His best result was a win in his fifth and final heat, but an 18th in the opening race cost him valuable points and placed him 13th in the heat classifications. Fellow countryman Lance Stroll (Zanardi-IAME) was 15th with all top-10 finishes in his heat races. American Dalton Sargeant (Tony Kart-Vortex) had two bad finishes and placed him 34th and into the Last Chance Race. He was able to place fifth in the 15-lap run, earning a spot in the 34 driver Prefinal. Sargeant charged forward from there, placing an impressive 15th while Stroll and DeMelo dropped outside the top-20. Sargeant gained a few more spots in the feature to lead the North American contingent with a 12th place finish. Stroll was 22nd while DeMelo ended 24th.

Canadian Parker Thompson (Energy-TM) and American Logan Sargeant (Tony Kart-Vortex) had similar results in their KF3 heat races. They were classified 17th and 18th respectively after the qualifying heats, and earned direct spots into the Prefinal. Sargeant drove a stellar race, moving up to the sixth position to gain 12 spots and put himself in contention, while Thompson retired early. Sargeant fought valiantly, and ended up placing 14th. Thompson, much like we saw at the Rotax Grand Finals in November, came from the back toward the front as he went from 25th on the grid to end up eighth to earn the top finish of the North American squad.