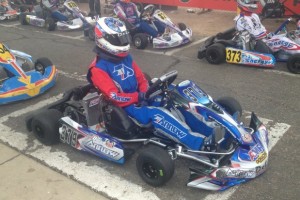 Arrow drivers scored multiple wins and podium finishes at the Rotax Challenge of the Americas series race at the Phoenix Kart Racing Association in Glendale, Ariz., last weekend. The race was the fourth round in the six-round championship program with over 100 drivers competing.

One of those 100 drivers was Phil DeLaO, competing in an Arrow X2 CIK for the first time in his career. DeLaO definitely represented his new team well with a dominating win in the Buddy Rice Karting Senior Max class on Sunday.

“My first weekend on an Arrow was incredibly successful and I learned a lot about the kart,” said DelaO. “The Arrow had very positive front end and it was extremely responsive to changes. It never slowed during the races and I could hold consistently fast laps for the entire race. I can’t thank KartSport North America, AZ Kartwerx, Full Throttle Karting enough and Eric Jones and Daryl Patullo for their tuning support.”

DeLaO began his dominating run early during the 15-minute qualifying session, posting his fast lap (45.742) on only his fourth circuit around the track in his new Arrow.

DeLaO dominated yet again in the 17-lap Prefinal race. He took advantage of his pole starting position and led the entire race finishing with a 2.656-second margin of victory.

The story was no different in the 25-lap main event as DeLaO drove unchallenged to a nearly 3-second win and his first victory of the season.

Maxfield laid down a 47.468 on his seventh lap to secure the pole position for the Prefinal race.

The Prefinal race wasn’t as easy for Maxfield as he battled to hold onto the lead with Donald Durbin Jr. It looked as if Maxfield had the win in hand, but Durbin got racey in the final laps, making a move on the final circuit for the lead in turn 10. It stuck and he went on to score the win. Maxfield settled for second place.

In the 25-lap main event, Maxfield trailed Durbin until he decided to make his move on lap 12 to take the top spot and Maxfield went on to win the race.

Other respectable Team Arrow finishes were Roy Fulmer IV who finished third after a hard battle for the win in the HoleShot Drive Systems Mini Max class.

Please contact the KartSport North America office at (855) KARTSPORT or visit their website at www.kartsportna.com with any questions.