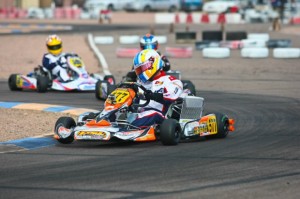 Continuing their quest to earn repeat Team USA invites to the Rotax Max Challenge Grand Finals (RMCGF), PSL Atlantic supported drivers Fritz Leesmann and Alan Rudolph continue to excel in Rotax Challenge of the Americas (COA) action. Heading to the Phoenix Kart Racing Association Formula K Raceway in Phoenix, Arizona this past weekend for the second of three rounds, both PSL Atlantic pilots were able to come away victorious in the west coast racing action.

After earning titles in both the 2012 Florida Winter Tour and US Rotax Grand Nationals, karting legend Alan Rudolph continues to make waves in his first season in COA action. A strong start to the series back in January set Rudolph up at the driver to beat in the Rotax DD2 Masters category, and Rudolph was able to better his showing this past weekend in Phoenix.

Greeted with colder than normal temperatures for the first day of official racing action, Rudolph would start his first national event on his home track in over 13 years with clocking fastest in qualifying to take the DD2 Masters pole position. From there, Rudolph was a master of the class, taking the prefinal win by more than seven seconds and the final victory by six seconds.

Sunday was much the same for the Phoenix resident, as Rudolph completed the weekend sweep and earned his third main event win of the 2013 series in the process. Rudolph will enter the final round of the COA in Fontana as the DD2 Masters point leader and with a strong grasp on the class championship and RMCGF invite.

PSL Atlantic teammate Fritz Leesmann was also back to his winning ways in COA action. The reigning Rotax DD2 champion in the series, Leesmann started off Saturday’s action with a dominant lap in qualifying to take the pole position and then a ten second victory in the prefinal race. The California native was unable to pull off the day’s sweep however, as a broken shifter linkage in the final ended his day on lap nine. The DNF was Leesmann’s first in nine feature races. 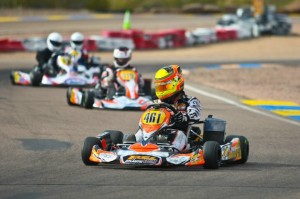 Back on track Sunday, Leesmann was able to again score the coveted pole position and prefinal win. With no problems in the final, the 2012 Team USA member was able to complete the day’s sweep as he drove to a 13 second victory, his third of 2013. Leesmann’s efforts meant a complete sweep of the DD2 categories for PSL Atlantic, as both drivers continue to show the strength of their programs.

“Alan and Fritz have set themselves up nicely leading up to the final round of the Rotax Challenge of the Americas,” noted PSL Atlantic team principal Mike Dobbelsteyn. “They both continue to display dominant performances, and I have confidence they will be able to continue to excel in Fontana and throughout the rest of the 2013 season.”

The final round of the 2013 Rotax Challenge of the Americas will head to California March 8-10 at CalSpeed Karting in Fontana. Set in the parking lot of the Auto Club Speedway, the challenging .75-mile course will see both PSL Atlantic drivers vying for more race wins and the overall class champions to secure their 2013 RMCGF Team USA berths.

For more information in PSL Atlantic or to inquire on team driver opportunities with the PSL Atlantic team, please call Mike Dobbelsteyn at 506-458-9357 or email mdobbelsteyn@dobbelsteyns.nb.ca