Team News: Another Weekend of Victories for Rolison Performance Group at Rotax Challenge of the Americas 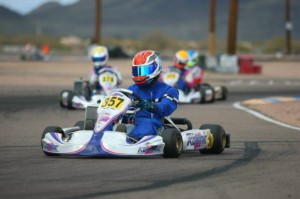 Rolison Performance Group has established itself as one of the most successful karting operations in recent years, and the results on track speak loudly in support of that claim. A total of 11 drivers contest the second stop of the Rotax Challenge of the Americas series this past weekend (February 8-10) with the RPG team. Owner Mike Rolison and a host of professional mechanics oversaw each driver’s programs, with the hard work on and off the track equating to five victories in four different categories.

Rolison Performance Group driver Phillip Arscott was able to sweep the opening round of Senior Max division in Phoenix. He qualified on the pole position by a full two-tenths aboard his RPG Kosmic. Leading all 17 laps of the Prefinal, Arscott was challenged early in the Final but prevailed to score his second victory of the season by three seconds. Phillip came just eight hundredths short of the pole position in Round 4, showing the pace to once again battle for the victory. Arscott was shuffled back however in the Prefinal, ending up seventh to start the main event from inside row four. The former US Rotax Grand Nationals champion fought his way forward and secured the second position for his third straight podium finish along with the championship lead.

Parker McKean entered the event with the championship lead in Senior Max by a slim one point margin, and remains in the hunt following his double top-five finish weekend. McKean qualified within the top-seven aboard his RPG Kosmic in both rounds, battling for the podium each day to leave with a fifth place finishes. McKean will return to the site of his first series victory next month at the series finale. Washington driver Hailey Groff continued to make strides on the weekend, contesting only her second Challenge of the Americas event. She placed 29th on Saturday, recording her fast lap of the race on the final circuit, and improved both to finish 24th on Sunday. 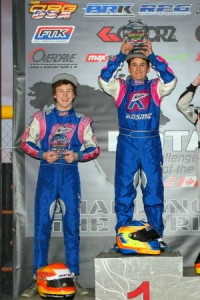 Blaine Rocha was perfect in the opening round in Phoenix as he completed the sweep to earn his second victory of the season. Rocha led the Junior Max field aboard his RPG Kosmic entry from qualifying to the main event on Saturday, including fast lap honors in the Final, to earn the maximum amount of points possible. Selliken was in the hunt, ending the day in the third position to place two Rolison Performance Group drivers on the podium. The following day, Selliken emerged the victor to score his second main event win of the season. Both Rocha and Selliken qualified within the top-10, but had to work their way into the top-five in the Prefinal. The hard-fought 25-lap Final saw both RPG drivers fighting at the front, with Selliken able to escape and earn the victory. Rocha was positioned for another podium finish until he was shuffled off in the closing laps and finished sixth. The two enter the series finale atop the championship standings still with Selliken holding the advantage over Rocha.

Earning his first Challenge victory of his career was RPG Masters Max driver Justin Peck. The Utah driver scored his first podium finish last month in Tucson, backing it up with a win in Phoenix. Running second in qualifying and the Prefinal to begin Round 3, Peck established himself as the driver to beat in the Final as the Tony Kart driver was able to fend off the competition to secure the win. The following day, Peck ran to third in the Final to gain his fourth straight podium finish in as many races, and establish himself as the championship leader.

Mini Max driver Sting Ray Robb recorded his second victory of the season as the RPG driver put himself in the title chase. Robb was within the battle for the win in Round 3, running top three all day until contact in the closing laps of the Final dropped him down the order and out of contention. He returned the following day as he swept the on-track sessions. The Tony Kart driver edged out the competition in qualifying and held back the challengers in the Prefinal. From there, he went wire-to-wire in the Final for a near three-second victory.

DD2 driver Andrew Evans garnered his third podium in just his second weekend of competition in the class. The RPG Kosmic Senior rookie drove to a third place finish in Round 3, and challenged for his fourth straight trip to the podium steps until contact took him out of contention. A bent wheel and axle kept him from charging back as he was forced to retire from the event. His results however still have him in the hunt for the top-three in the series championship. Utah’s McKay Snow and Northern California twin sisters Toni and Annie Breidinger rounded out the RPG roster in Phoenix. Snow battled inside the top-10 all weekend in Junior Max, but left Phoenix with finishes of 12th and 13th. The Breidinger’s made vast improvements over the weekend and gained solid performances. Annie had finishes of 15th and 17th, while Tony ran 18th and 23rd, with both expected to gain better results at the season finale with more time working with the RPG staff. 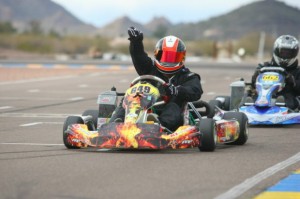 Rolison Performance Group will spend the next three weeks preparing for the Rotax Challenge of the Americas series finale, set for CalSpeed Karting circuit in Fontana, California. For more information on all the products and services that the Rolison Performance Group has to offer, visit www.rolisonperformancegroup.com .  RPG has arrive-and-drive opportunities for the entire Challenge of the Americas and Florida Winter Tour events, as well as the 2013 SKUSA Pro Tour schedule this summer. Anyone interested in being part of this winning program should contact Mike Rolison via e-mail at roli5000@hotmail.com.

Rolison Performance Group is a leading race team and prep shop in American karting, and is also a Rotax Service Center and a Kosmic chassis dealer.  Owner Mike Rolison, known as “Roli” at the racetrack, has built a career coaching some of the best kart racers on the West Coast. Over the past decade, he has helped 100′s of drivers and mechanics improve their craft. Mike brings world class driving and coaching experience to every racer he works with. Whether you are competing on the local, regional, national or world stage Roli’s driving and tuning instruction will improve your abilities and results. Luke Selliken gained the 2012 SKUSA Pro Tour TaG Junior championship with the support of Rolison Performance Group.  RPG provides trackside support and arrive-and-drive programs for many series, including the Challenge of the Americas, US Rotax Grand Nationals, Pan-American Challenge, SKUSA Pro Tour, Northwest ProKart Challenge and the SKUSA SuperNationals.  The team is a Kosmic chassis and product line dealer and is proud to campaign karts on the regional and national stage.