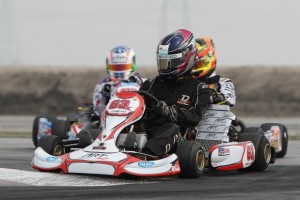 Travis Lowe aboard his new ART GP kart for 2013

On February 1-2 Travis Lowe set out to compete in Tag Sr. at the season opener of the SKUSA! ProKart Challenge California series, at the ButtonwillowRacewayPark.  It’s a new year and Travis is aboard a new kart competing with a brand new up and coming team: ART GP America.  With a record number of entrants competing at this year’s season opener, it looked to be a challenging race for Travis and the new team.  It was a perfect weekend for racing, with minimal track time in the new kart before the race, Travis looked forward to having as much dry on track sessions as possible.

Friday practice started off great. From the start of the day, Travis was on top of the time charts.  As the day progressed, he became more accumulated to the new chassis and his times began to improve.  With minor chassis and engine changes throughout the day, Travis’s speed was on par with his competitors that were on new rubber while he stayed on used rubber.  At the end of the day, the team and their new driver were extremely happy with the times. After preparing the kart for the next day’s events, they packed up to go and get some rest before race day.

Travis picked up right where he left off, and after morning warm up, was placed 4th out of 32 drivers.  After a fresh set of rubber for the first time all weekend, and some minor adjustments, Travis headed to qualifying. He held the top spot early on, and remained there for a few laps, until being surpassed by Fritz Leesmann and eventually settled into fourth place.  Travis was pleased with the kart and engine, but there were minor tweaks to be done before heading out to the first heat race.  After turn one, Travis was able to move up into the third place position and would remain there until the end of the race.  While preparing for the second heat race, a frayed throttle cable caused the gas to stick open and was about to snap off.  The team had to rush to change the cable and Travis barely made it to the grid in time for the start of the race.  At the drop of the green flag, he was able to move his way up into second place and would end the heat race there.  The pace of the kart had dropped off and after mulling over what happened in the second heat, the team found that in the frantic replacement of the throttle cable Travis only had a little more than half throttle.

After fixing the issue and preparing for the main event, the engine would not start and the team found that the needle in the carburetor was coming apart. Once again, Travis barely made it to the grid in time.  At the start of the race, Travis was able to jump into the lead, but exiting turn two he was shoved off the track and fell back to ninth place.  After being caught into a heated battle for the first half of the race, Travis found himself in the seventh place position and was unable to move further up in the order before the checkered flag.  Although the victory had slipped through their hands, the team and Travis were both happy with the unveiling of the kart and driver, and with more time the victories will come.

Travis would like to thank all his current sponsors who made this possible throughout their continued support: Barstow Electric, ART GP America, D Power Racing Engines, ART GP, OMP America, and of course his mother, father, family, and friends.