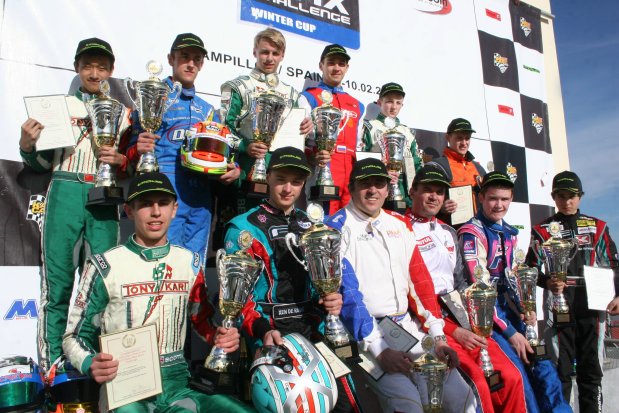 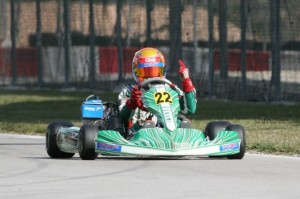 Today the fourth edition of the traditional ROTAX Winter Cup ended with a spectacular day for the final races. About 100 participants were heading for the decisive wins in the categories of MAX Junior, MAX Senior and MAX DD2 category. Ambition was high, since the best of each category was rewarded with a free season in the upcoming ROTAX Euro Challenge 10th anniversary year.

Junior pole setter Josh Price (Chris Rogers M/Sport) had a quite easy job in prefinal. After Sena Sakaguchi (Intrepid Driver Program) did not start well, Price seized his chance and took the win ahead of Connor Hall (Strawberry Racing) and Lars Lamborelle (DFK). Sakaguchi had to be satisfied with rank six in the end.

Final was not the race for Josh Price. After taking lead he collided in the very first lap, which made him drop back to the end of the grid. So Guan Yu Zhou (Strawberry Racing), Connor Hall and Thomas Preining (Protrain Racing) were the ones fighting for the win, clearing the matter among themselves. When the chequered flag fell it was Hall who crossed the finish line first in front of his British teammate Zhou and the Austrian Preining. 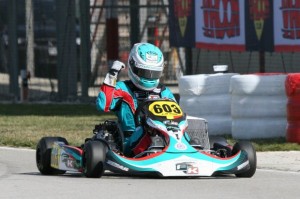 In DD2 the favourite Sean Babington (Dan Holland Racing) found an equal opponent. That was Xen de Ruwe (FK Racing Team AB Ltd). The man from Belgium was very unlucky on Friday, not managing to set a time in qualifying practice due to an issue with his radiator. Yet he fought his way back to rank six throughout the heats. From here on the FK driver did not make any mistakes and closed up to Babington in lead. It only took a few laps until de Ruwe took the first position and finally the win. Meanwhile Babington even lost his second place to Switzerland’s Kevin Ludi (Spirit Racing).

In the final race Xen de Ruwe made a bad start, which threw him back to fourth position. Yet the Belgian did not give up and recovered quickly. He passed one opponent after the other and gained first position by halftime of the remaining 9 laps. From then on he managed to keep the pressure from behind and brought his victory home, just ahead of Sean Babington and Shaun Slavin (Intrepid Driver Program).

In the special classification for DD2-Masters it was Igor Mukhin (Intrepid Driver Program) from Russia setting the pace by winning the prefinal and final at Campillos. 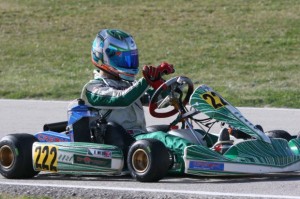 The most open competition was reserved for senior category. About ten drivers were in the run for the victory in prefinal, performing a really thrilling show. Lead almost changed each lap between the protagonists James Singleton (Cole Racing), Harry Webb (Strawberry Racing) and Harrison Scott Webb (Strawberry Racing). When it got to the final spurt Edward Brand (Intrepid Driver Program) closed the gap with the top four and stirred up the ranks. Finally Scott took the win ahead of Brand, Webb and Singleton.

The Strawberry pilots Harrison Scott and Harry Webb really had a walk-over in the final race. Both were able to leave behind the rest of the grid and started the decisive phase in the last two laps. But Webb kept hard and defended his top position up to the chequered flag thus taking the win ahead of his teammate. Podium was completed by Luke Hughes (AMT Racing) from the UK who crossed the line in third position.

Summing up one can congratulate the RGMMC team for a most professional event again, which really set new benchmarks in many fields. The effective new race control proved its worth just like 4FLAG, increasing the safety for drivers and marshals. The great debut of live TV coverage with almost 8.000 viewers and live timing followers surely was the highlight of the weekend. RGMMC is ready to take the next step and is looking forward to a great season of the ROTAX Euro Challenge. From 27th to 31st of March the Belgian track at Genk will be venue of the opening round (open for entries Monday 11 February) – the start into the tenth anniversary season of the ROTAX Euro Challenge.