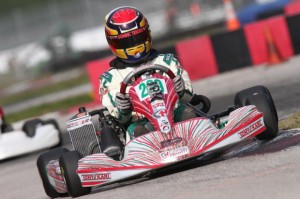 Up-and-coming Florida karting driver Dominic Tesoro made his first podium appearance in 2013 at the recent opening round of the Formula Kart Productions Florida Winter Tour (FWT). The mid-January event saw Tesoro overcome electrical gremlins in qualifying and fight for the final podium position during the Sunday events at Palm Beach International Raceway (PBIR) in Jupiter, Florida. With the Tour set to resume in just one week’s time, the Plant City, Florida resident will look to carry his momentum to the popular permanent parking lot facility of the Homestead Karting Complex for round two.

Battling a huge international field of 56 in the Rotax Junior ranks at PBIR, Tesoro would suffer electrical gremlins during the two qualifying sessions held on Friday. With qualifying setting grids for the wheel-to-wheel action to come, Tesoro found himself behind the eight ball with his times relegating him to the Last Chance Qualifiers for both Saturday and Sunday.

Tesoro put in a strong run in Saturday’s Last Chance Qualifier in his attempts to make it to the A main final, however an unavoidable incident caused his bumper to break. The corresponding black flag ended his LCQ run early, with the 15-year-old making up some ground in the B final to finish 17th.

A new race day on Sunday would see the rising talent put forth the determination to make the day’s main event. Taking the win in the LCQ would secure Tesoro with a transfer spot and 33rd place starting position for the prefinal race. A strong race craft and lightening-quick speed in his Tony Kart/CMW Engine Rotax entry saw Tesoro rocket into the top-ten by the end of the 16-lap prefinal. With a strong comeback and potential podium now in sight, Tesoro muscled his way towards the front of the pack in the final. A race for the ages then ensued, as Tesoro made his bid for the final podium position on the last lap.

His third place finish during the second FWT race earned him some redemption from Saturday’s event, and Tesoro will now look to continue his momentum at the next round. Set for February 22-24 at Homestead Karting Complex, located on the grounds of the Homestead-Miami Speedway, Tesoro will look to make his way back to the podium in sunny Homestead. In a tune up event, Tesoro will also take part in the Formula Kart weekend in the TaG Senior category with a Rotax powered AM Chassis.

Dominic would like to thank his mom and dad, Tony and Kristie Tesoro, Chase Hewitt Motorsports, AM Engines, Jose from CMW Engines and Lady Luck. For more information on Dominic Tesoro and to inquire about sponsorship opportunities available, contact Tony Tesoro at 813.707.4512 or visit his website www.DominicTesoro.com