Team News: CRG-USA Travels to Rotax Challenge of the Americas

CRG-USA is set for the midway point of the Rotax Challenge of the Americas program as the race team will travel to Glendale, Arizona. The Phoenix Kart Racing Association facility will host rounds three and four of the international Rotax Max Challenge on February 8-10. The team came away from the opening weekend last month in Tucson with one podium behind rising American karting star Austin Versteeg.

The Utah driver enters the Phoenix round fourth in the championship chase in the Junior Max category. Versteeg ran top-five aboard his CRG all day in round one at the Musselman Honda Circuit, working with veteran mechanic Mike Speed all weekend. Qualifying third, he fought hard for the fourth position in the Prefinal, and secured his first podium finish of the season with a third place in the Final. Versteeg hovered around the top-five once again on Sunday, including qualifying sixth – just five-hundredths off the fast time in one of the most competitive sessions of the event. Finishing fifth in the Prefinal, Versteeg ended up seventh in the Final. Austin trails in the standings by 59 points, but has the confidence of two podium finishes last year at the Phoenix event, battling for the ticket to the Rotax Grand Finals in New Orleans.

Senior Max driver Sabré Cook struggled in her first outing since the SKUSA SuperNationals XVI where she claimed the S2 Semi-Pro Stock Moto title with a runner-up finish. Her weekend began with engine issues early as she seized her primary engine in Friday practice. Behind the competition after missing a couple sessions with the engine related problems, Cook battled with straight-line speed all weekend. Sabré and mechanic Kimball Williams made every possible adjustment with the engine and chassis looking for the right set-up. After engine issues seemed to be solved, they then fought with rare brake problems. She would record finishes of 26th and 23rd on the weekend. With time at the shop to remedy her program, Cook is more confident heading into the Phoenix weekend. 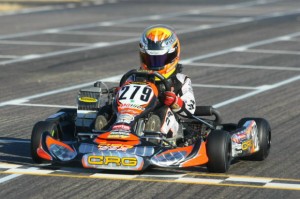 Austin Versteeg drove to a third place at the opening weekend of the Rotax Challenge of the Americas
(Photo: Sean Buur – Go Racing Magazine)

Joining the CRG-USA squad on the weekend is Junior Max driver Lindsey Brewer. The Colorado driver has spent time with the operation in preparation for 2013, and posted some good testing sessions aboard her new CRG chassis in between snow falls at the Grand Junction Motor Speedway facility. Brewer was scheduled to compete in Tucson with the team, but a snowboarding incident delayed her official debut with CRG-USA.

CRG-USA gained strong results last weekend at the California ProKart Challenge opener in Buttonwillow. Robert Marks marked his debut from S4 Master to S2 Semi-Pro Stock Moto with a victory aboard his CRG, while Jimmy McNeil was runner-up in the S1 Pro Stock Moto division. Darrell Tunnell added a fifth place finish in the S4 class.

CRG-USA is an official K1 RaceGear and MG Tires race team, and ready to provide the best trackside service in 2013 at the Superkarts! USA Pro Tour, the Rotax Challenge of the Americas, Rocky Mountain ProKart Challenge and other selected events and series. The company is also continuing to add to its growing dealer network with new locations throughout the United States. If you are interested in becoming part of the CRG-USA network, or becoming part of this growing professional race team, please contact Stacey Cook at info@CRG-USA.com or phone 855-TEAMCRG.

Located at the Grand Junction Motors Speedway in Colorado, CRG-USA is the newest importer for the CRG chassis brand. Operated by Stacey Cook, the company will focus their distribution and marketing on the western and central portion of the United States. In addition, the operation is fielding a national race team program through the 2012 season at all the major karting events on the year. If you want to race with the best product in karting, jump on board with CRG-USA today. Visit www.crg-usa.com or phone 855-TEAMCRG (832-6274).