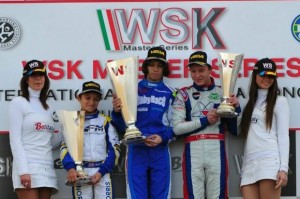 After making the announcement he would race with Energy Corse factory team in Europe for the 2013 racing season, Canadian karting sensation Parker Thompson would make his KFJ debut in his first event at the WSK Master Series in Muro Leccese, Italy. Taking on the International Circuit La Conca, Thompson was able to succeed in his debut event with an impressive podium result.

“After a successful two-day test a week before the date of the WSK Master series at La Conca, I felt that I was prepared to take on my first KFJ race with Energy Corse,” explained Thompson.

Limited to four 15-minute practice sessions the Thursday before the event weekend, Thompson would need to make the most of this valuable track time. Quick in the early sessions before rubber accumulated on the track, Thompson needed to adjust his driving style to have a chance at the victory against a stout international field.

“I was disappointed with my qualifying position, but I managed to be slotted into group A. This was a huge bonus, and would make my job a lot easier in the heats starting 11th,” continued Thompson.

With four heat races on the schedule for Thompson on Saturday, the Canadian would face an extremely busy day of wheel-to-wheel racing action. Unsure of what to expect for his first WSK Master Series event as well as his KFJ competition, Thompson’s only plan was to get to the front. An excellent start on the first heat saw Thompson gain several positions, but the rising talent would encounter a damp spot in corner three. Attempting to defend his position, Thompson missed the apex due to the moisture, losing all he had gained on the start. Running mid-pack around the halfway point, a red flag soon came out and gave Thompson a second chance to make up lost ground. Making no mistakes on the restart, Thompson soon found his rhythm and was able to move up to the third place by the checkers. Penalties then advanced Thompson to second, a solid first effort in racing action.

The second heat would see trouble again for Thompson in turn three, as the 2012 Rotax Max Challenge Grand Finals podium finisher was punted off track on the first circuit. Working his way back yet again, Thompson settled for fifth after the eight lap race. Struggling with grip issues again, the third heat would start off with Thompson making it cleanly through turn three but his lack of speed eventually dropped him back to eighth. The final heat saw Thompson hold his starting position after a poor start, but advance to post another eighth place finish.

“With a combination of second, fifth, and two eighths, I managed to be placed third for my prefinal,” Thompson explained. “I was happy with this result, and how hard I worked to recover from a poor qualifying effort.”

Coming down to Sunday’s final events, the day would not start off well for the Energy Corse driver. Nearly a half second off in the morning warm-up, Thompson’s woes were quickly diminished as he quickly made his way into the second position in the first eight laps of the prefinal. Holding second for two more laps, Thompson fell back to third for the remainder of the race. Advancing to second after penalties were assessed, Thompson would start the final from the fourth position, as the other prefinal posted times faster than Thompson’s.

Knowing he had the pace to challenge for the final win, Thompson focused on running a smart race. Starting on the outside, Thompson moved to the inside once the lights went out and emerged the second place driver as he came out of the first corner. Pushed wide by a competitor and into the marbles, the Canadian fell back three positions to fifth. After two laps, Thompson found himself gapped from the lead pack. As the laps began to wind down, Thompson was able to make up ground on the leaders and was gaining on the pack of second, third and fourth place drivers. Playing it smart, Thompson kept his distance from the aggressive pack and crossed the stripe in fourth. Post-race penalties would advance Thompson to third, earning a podium finish in his KFJ class and Energy Corse factory team debut.

For more information on Parker Thompson including partnership opportunities, please visit him online at www.ParkerThompsonRacing.com or Parker Thompson Racing on Facebook and Twiiter @parkertracing