The 2013 season is entering its second month and Rolison Performance Group is keyed in on adding more victories. The Oregon-based operation is traveling to Glendale, Arizona for the second stop of the Rotax Challenge of the Americas at the Phoenix Kart Racing Association facility on February 8-10. The team left the opening weekend in Tucson last month with five victories, nine podium visits in total and now enters the midway point leading the championship in three classes.

The Senior Max and Junior Max category saw Rolison Performance Group drivers win all four feature races during the opening weekend in Phoenix. Parker McKean and new RPG driver Phillip Arscott won in the Senior division. McKean drove away to a six-second victory on Saturday, while Arscott swept the day’s action on Sunday. Each also earned fast lap honors in the feature races, opposite of the event they won. Luke Selliken and Blaine Rocha were the top two drivers in the Junior class for RPG. Selliken rebounded from a seized engine due to freezing temperatures in morning warm-up to win Saturday by over two seconds. Rocha was the quicker the following day, as he won the feature race over Selliken by three seconds. Sting Ray Robb earned the fifth win of the weekend for Rolison Performance Group, as he edged out the Mini Max competition on Sunday while placing runner-up Saturday. 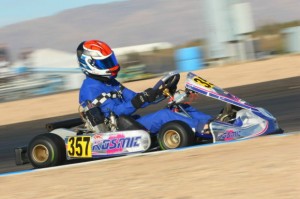 Former US Rotax champ Phillip Arscott was among the quickest in Senior Max all weekend in Tucson aboard the RPG Kosmic
(Photo: Sean Buur – Go Racing Magazine)

Rolison Performance Group drivers enter the Phoenix weekend 1-2 in the Senior and Junior Max championship chases. McKean and Arscott are separated by one point in Senior Max, while Selliken leads Rocha by 17 markers in the Junior Max standings. Both categories will award the champion a ticket to the Rotax Grand Finals, scheduled for New Orleans later this year to take on the best ‘Rotaxians’ from across the world. Robb has a seven point advantage in the Mini Max points to put three RPG drivers at the top in three of the seven categories.

Two other Rolison Performance Group drivers remain in the championship chase at the midway point of The Challenge. Andrew Evans is making great strides in his first few months working with the RPG staff, making his DD2 debut in Tucson. The Senior-level rookie finished runner-up in both main events, and sits second in the class standings. Utah driver Justin Peck spent the 2012 season with RPG, and is already improving in his return with the team for 2013. Peck was second and third last month, earning his first podium finishes at The Challenge, and holds the third position in the championship chase.

The remainder of the driver roster for the Rolison Performance Group tent in Phoenix this weekend will welcome two new drivers. Northern California’s twin sisters Toni and Annie Breidinger are making the move to RPG aboard the Kosmic brand, joining Selliken, Rocha, and Utah’s McKay Snow in the Junior Max category. Washington’s Hailey Groff rounds out the drivers, as she will make just her second Rotax Challenge of the Americas start in Senior Max. 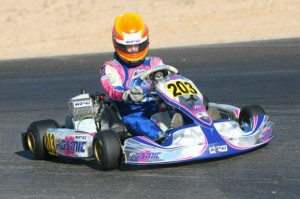 Mike Rolison, owner/operator of Rolison Performance Group, will oversee the team’s action on the weekend, putting in his personal advice and ensuring each of the RGP Rotax engines are performing at the optimal level. He will be backed by a number of experienced mechanics that will work one-on-one with the drivers, including Joey Wimsett, Mike Beeny, Bonnier Moulton, Erik Bartolero, Markus Josephson, Austin Elliott, Diego Valverde, Becky Thompson, Mike Groff, John Arscott, and Paul Evans. Veteran racer and mechanic Wesley Boswell will oversee the data analysis and driver coaching with the RPG drivers, as he did in Tucson.

For more information on all the products and services that the Rolison Performance Group has to offer, visit www.rolisonperformancegroup.com .  RPG has arrive-and-drive opportunities for the entire Challenge of the Americas and Florida Winter Tour events, as well as the 2013 SKUSA Pro Tour schedule this summer. Anyone interested in being part of this winning program should contact Mike Rolison via e-mail at roli5000@hotmail.com.

Rolison Performance Group is a leading race team and prep shop in American karting, and is also a Rotax Service Center and a Kosmic chassis dealer.  Owner Mike Rolison, known as “Roli” at the racetrack, has built a career coaching some of the best kart racers on the West Coast. Over the past decade, he has helped 100′s of drivers and mechanics improve their craft. Mike brings world class driving and coaching experience to every racer he works with. Whether you are competing on the local, regional, national or world stage Roli’s driving and tuning instruction will improve your abilities and results. Luke Selliken gained the 2012 SKUSA Pro Tour TaG Junior championship with the support of Rolison Performance Group.  RPG provides trackside support and arrive-and-drive programs for many series, including the Challenge of the Americas, US Rotax Grand Nationals, Pan-American Challenge, SKUSA Pro Tour, Northwest ProKart Challenge and the SKUSA SuperNationals.  The team is a Kosmic chassis and product line dealer and is proud to campaign karts on the regional and national stage.