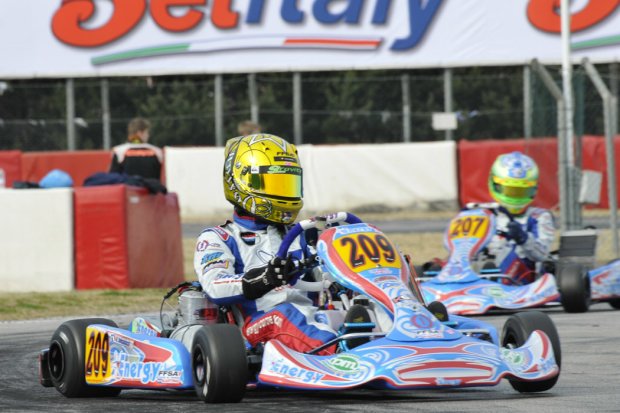 The 2013 WSK Season started in the best way possible. International karting met in Muro Leccese for the first racing weekend of the season of the WSK Master Series, which this year has in schedule four rounds on the most important racetracks in Italy. The stand of the circuit was once again crowded: this circuit has definitely become the reference point for all the southern Italian fans.

Dorian Boccolacci conquers the KF at the last lap

There were many drivers aiming at winning the KF, like the French Armand Convers (Kosmic-Vortex-Vega), who during Friday’s qualifying had achieved the Superpole; Or the Polish Karol Basz (Tony Kart-Vortex-Vega), who as far as yesterday was behind the the top drivers but then, today, began his performance winning the Pre-final beating the French Dorian Boccolacci (Energy-TM-Vega) into second position. The final started with Basz as protagonist, who then handed the leadership over to Boccolacci. After that the battle behind the leader became really gripping when Basz had to pull over near the finishing line for an engine failure with only two laps remaining. Boccolacci, however, kept the leadership and won the race preceding Convers. The third place was conquered by the convincing Canadian Lance Stroll (Zanardi-Parilla-Vega) who beat the excellent British driver Ben Barnicoat (Art GP-TM-Vega) into fourth position.

In Muro Leccese Max Verstappen (CRG-TM-Dunlop) was unbeatable in KZ2, where he won even in today’s Final 2 after winning Final 1 yesterday. This time the die-hard rivals of the young Dutch driver were the Italian Paolo De Conto (Birel-TM-Dunlop) and the Czech Patrik Hajek (Praga-Parilla-Dunlop), who completed the podium after pursuing the leader for the whole race. The Italian Riccardo Negro tried, in the race on his home circuit, to do better than the seventh position achieved yesterday. After occupying the sixth position for great part of the race, he dropped back to 9th position in the last phases. 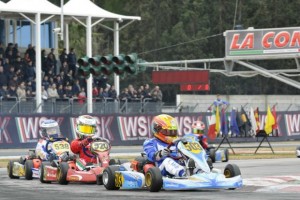 Alessio Lorandi (Tony Kart-Vortex-Vega), the 14-year old driver from Salò (Italy), was overwhelming in the KF Junior, after dominating yesterday’s heats. Lorandi won again in the Pre-Final A preceding the Russian Nikita Sitnikov (Tony Kart-BMB-Vega), while the other Pre-final B was dominated by the English Norris (FA Kart-Vortex-Vega) who preceded the Canadian Parker Thompson (Energy-TM-Vega). In the Final Lorandi kept the pace he had been keeping so far, pulling away and leaving behind him the battle for the runner-up position between Max Defourny (Kosmic-TM-Vega) from Luxembourg, Norris and his country fellow-man Max Fewtrell (FA Kart-Vortex-Vega). This tussle gave even more advantage to Lorandi – he crossed the finishing line first – but not to Defourny, who lost several positions in an overtaking attempt. so, the second place went to Norris, followed by Thompson.

The battle between the Spanish Eliseo Martinez (CRG-LKE-Le Cont) and the Italian Francesco Pagano (Top Kart-Parilla-Le Cont), which held the stage in the second half of the 60 Mini final, was crucial to give the victory to the young Indian driver Kush Maini (Tony Kart-LKE-Le Cont). At the last bend, Pagano tried to overtake Martinez for the nth time – the Spaniard had already beaten the Italian in the Prefinal – but went off the track, damaging Martinez too. The latter was overtaken by Maini: the Indian, who had always closely pursued the leading drivers, achieved his first victory, which is also the first victory ever for an Indian driver in a WSK event.

The WSK Master Makes for Sarno

The next appointment of the WSK Series is scheduled for next 7th April in Sarno (Salerno), but next month on 3rd March, in Muro Leccese there is the first round of the WSK Euro Series.