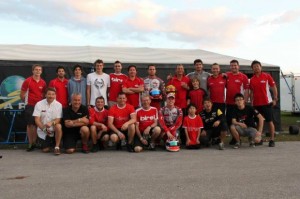 The first race of the 2013 karting season is under KMS North America’s belt and it was a successful start to the season for the new team. In its first weekend under its new structure with team manager Peter Kalman at the head, KMS North America took 6 podiums in total including 2 wins in the DD2 class with Ben Cooper on Saturday and Kevin Ludi on the Sunday.

In a rain soaked Saturday Snr Rotax Final Luke Varley was able to drive away by just over 12 seconds to take the win on the track but was assessed a 1-position penalty to put him down to 2nd for the official results. This was a good solid start for Luke and the team as Luke had not raced in Rotax for 4 years and had not actually raced in 6 months. On the Sunday Luke would go on to finished 5th after a mistake made early in the race left the gap to the front to much to overhaul.

“I’ve come away from the first round in a great position in the championship. From the position I was in Friday night after qualifying, we worked hard and turnt things round so I’m happy with the result. Hopefully the next round at Homestead I can once again secure solid points and hopefully finish on the podium again.

I would like to thank, Ronni Sala, Mariano De Faveri from Birel Spa, my mechanic Luca Frigerio. Peter Kalman and all at KMS North America and finally Steve Ogden for the engines.”

In the DD2 Masters category former World Champion Christophe Adams would go on to take a great 2nd place finish behind the current World Champion Morgado. This was a great achievement after having a difficult Saturday.

“Sunday’s Final went great for me as I had to work my way through the pack to get into 2nd. By then the gap to the leader was too much to catch but the speed was very good for me taking the fastest lap in the Final. Hopefully we can continue on for the next race in Homestead.”

In DD2 Kevin Ludi and Ben Cooper were the guys to beat with Kevin and Ben securing 1st and 2nd in qualifying for both days. When the rains hit on the Saturday Ben was able to go onto secure a comfortable win in the difficult conditions. Kevin took 2nd in the Pre Final, but was given a 2-position penalty due to a damaged back bumper so this would put him down to 4th for the start of the Final. With in a few laps Kevin was into 2nd again but Ben by that stage had already taken a big lead. The times between the two were almost identical so it would have been an interesting race if it weren’t for the gap gained by Ben at the start.

Sunday’s race however was certainly entertaining. Ben would take the Pre Final win ahead of Kevin but the Final would be a different story as the pair would battle throughout the race and it would eventually come down to the last corner exit for the drag to the line. Ben would defending hard into the last corner allowing Kevin to take the normal line getting a better exit to beat Ben to the line by 0.038 of a second. A great way to end what was a dominating display by KMS North America’s two DD2 drivers.

“The pace that Kevin and I showed through out the weekend was fantastic as we were both a few tenths ahead of the rest of the field. I’m sure in Homestead the others will be pushing hard to close us down. The race in the rain was good for me as I was able to take a comfortable victory, but the race with Kevin on Sunday was great as we were really able to show the speed of the Birel DD2 chassis, whilst putting on an entertaining race at the same time. It was great way to end the weekend with the two of use only separated by 0.038 of a second.”

“For me was a perfect week in a new Racing Team and I really liked the ambiance in the Team. It was a perfect start for me in this New Year with these two great results. I really had a good speed from the beginning until the end of the week and the Kart and the Setup was great. It’s also great for me to work together with teammate like Ben Cooper and to compare with the World Champion. This new Team really deserves this great result and I am looking forward to Homestead to do the best result possible. I can’t wait to drive the second Round of FWT. Now I leave soon for my second Race in Malaga before I come back to Miami…”

KMS North America now is looking forward to heading down to the next round of the FWT at Homestead. KMS North America will have an extra driver in Homestead taking their total to 12 drivers. Japans Kosuke Niimi will be competing in the Rotax Jnr category to gain more experience for the start of the season in Japan. This takes the tally of Japanese drivers up to 3 with Tadesuke Makino and Toransuke Hamada competing in the first race of the FWT in the Snr and Micro categories.