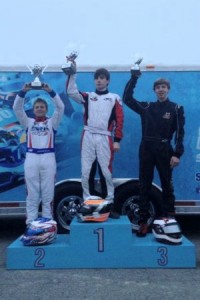 Brenden Baker on top of the podium in TaG Junior

The SKUSA Prokart Challenge is one of the most competitive regional championships in the United States and this past weekend’s opening round at ButtonwillowRacewayPark proved this with almost 150 entries filling the paddock. ART Grand Prix America would enter five drivers in hopes of capturing the team’s first victory. The early season roster remain unchanged with Brenden Baker and Phillippe Denes racing TAG Junior, Steve Wiener in TAG Masters, and Andrew Wiener competing in TAG Senior. One extra challenger joined as Travis Lowe has signed on to race the complete championship in TAG Senior. Travis brings with him a 2011 Prokart championship in the category and is one of the strongest TAG drivers in the country.

The two day event began with practice on Friday and things looked strong as both Baker and Lowe led the way in their respective classes. Not far behind, Denes and Andrew Wiener were also looking very competitive with the pace they were showing. Fast on both new and used tires, expectations were high going into the race event program. Baker, who was running the #3 plate after his 3rd place finish in last year’s SKUSA Pro Tour, started the day off strong by gaining the pole position. He would go on to win the first heat with a beautiful last lap pass and then drive to an over four second victory in the second heat. Denes, the young driver in his first full season of racing competition, qualified a very impressive 6th in the 25 kart field. A first lap incident in the opening heat forced him back, but he recovered to 11th. Driving a strong second heat saw him move back up into the top 10 and line up the final in 8th. The 20 lap main would prove to be a thrilling battle as Baker jumped out to an early lead, but was soon overtaken. Sizing up his rival, the two would open up a large enough gap and they ran nose to tail the whole race. Brenden would wait until the final lap and make a daring pass into the second turn. Braking incredibly late, Baker was able to made the pass and hold on for the rest of the lap to cap off the perfect sweep of pole, both heats, and most importantly main event victory. Denes had a fantastic battle throughout the race and finished just outside the top 10 in 11th place, but showed he will be a force to be reckoned with as the season continues.

In TAG Masters, Steve Wiener was engulfed in battles all day long. Steve had battled some carburetor issues in Friday practice, but come race day everything was running strong. After blowing an engine in the second heat on the penultimate lap, Wiener had a spirited drive from the 16th and final position up to 9th by the end of the race.

The headline class of the weekend, TAG Senior, was a war on track with close to 30 competitors battling hard each and every lap. Travis Lowe started the day off strong with a 4th place qualifying effort and subsequent heat race finishes of 3rd and 2nd, putting the California veteran on the front row for the final. Andrew Wiener struggled in qualifying to time in 15th and was stuck in the mid pack bashing throughout the heats to line up 12th for the final. Lowe, on a Leopard, knew it was critical to get the jump on the start to try and get ahead of the Rotaxes that had dominated the day to mix up their rhythm. Getting a fantastic start, Travis was able to take the lead in Turn 1. Unfortunately, the excitement was quickly shattered as turn 2 brought lots of contact and an off track ride. Both Lowe and Wiener continued with what seemed to be targets on them as they just couldn’t get going for a number of laps and eventually found themselves 7th and 18th respectively at the end of the race, a disappointing result for the team after things looked so strong going into the final.

“What a weekend! I’m so happy for the entire team and today’s victory could not be any sweeter,” expressed team manager Kyle Kuntze. “Brenden made one of the best passes I’ve ever seen to bring us the victory and is proving why he is one of the most talented young drivers in the country. The TAG Senior main was definitely a let-down, but that’s racing and I’m proud of the speed we showed in the toughest category here. We proved they will have to contend with our team each and every weekend.”

We would like to thank Robert Baker, Troy Castaneda, Craig Lowe, Brody Roa, and Race Liberante for their excellent work.

ART Grand Prix America will be right back on the road as they travel to Phoenix for the next round of the Gatorz Challenge of the America’s championship, looking to build on the early season momentum.

For information on arrive-and-drive programs or to become a dealer for ART Grand Prix chassis contact us at artgpamerica@gmail.com