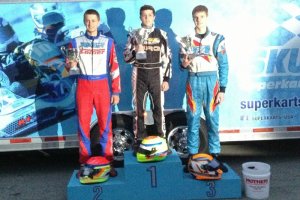 Making the move to the senior ranks after the 2012 SuperKartsI USA (SKUSA) SuperNationals, CRG West pilot Alex Keyes exploded onto the California karting scene at this past weekend’s opening round of the Pro Kart Challenge (PKC) California program. Making his rookie debut in the TaG Senior category, Keyes went on to take a pair of heat race wins and main event victory at the .69-mile ButtonwillowRacewayPark kart track in Buttonwillow, California.

Working with karting veteran Arie Ouimet as both a driver coach and tuner, Keyes started his weekend off strong proving to be one of the fastest drivers in unofficial testing. Utilizing a SwedeTech Racing Engines Rotax powered CRG, Keyes was able to continue his speed through official practice and qualifying where he would be classified second and third respectively.

Running under the two-heat race format where both heat races results would determine the next on track sessions starting position before the afternoon’s main event, Keyes began to flex his muscles when the wheel-to-wheel action commenced. Moving to the point in heat race one, the rookie driver would fall back on a few occasions but rise again before the final checkered flag flew. Taking the win by scant 0.882 seconds, Keyes would also score the fastest lap of the race.

Heat two would be much of the same for the CRG West pilot as again he quickly moved to the point, and this time never looked back. Unable to match the fastest lap of the race, the one of only two Rotax drivers in the 32 kart field went on to a commanding 3.237 second victory and claimed the pole position for the day’s main event.

Looking to carry his momentum throughout the 20-lap final, Keyes did just that as he showed that he would be a threat for the overall series title. Running some of the fastest laps of the weekend and a very smooth, consistent racing line, the now California resident went on to take the checkers just under a second ahead of his closest competitor and will now enter round two as the point leader and driver to beat.

“My entire family recently made the move to California from Michigan so the Pro Kart Challenge and all the facilities in California are new to me,” explained Keyes. “I am not used to one day events and this was my first TaG Senior race in the PKC program. I would like to thank my mechanic Arie for all the hard work and effort in helping me achieve this win.”

A few weeks prior to the PKC event, Keyes would see action in Tucson, Arizona at the opening round of the Rotax Challenge of the Americas. As his first event as a Senior driver and first time he had worked with his new tuner, Keyes would show his speed running in the top five for the majority of the weekend. With a disappointing 14th place result on Saturday after a ten second penalty for avoidable contact at the drop of the green flag, Keyes would rebound on Sunday and challenge for a podium. Crossing the stripe in the fourth position, the aggressive pilot would end the weekend on a good note before heading back to California.

Alex would like to thank his sponsors and supporters for a great start to the 2013 season; AutomotiveTools.com, PKT Axles, CRG West, SwedeTech Racing Engines and his tuner/driver coach tuner Arie Ouimet.

With no time off, Alex Keyes will head back to Arizona for the second round in the Rotax Challenge of the Americas. Taking place at the Phoenix Kart Racing Association (PKRA) facility in Phoenix, Arizona, Keyes will try and continue his winning ways as he looks to best a talent filled field February 8-10.

For sponsorship opportunities and more information on Alex Keyes, visit www.alexkeyes.com or contact by email to info@alexkeyes.com