California ProKart Challenge Reaches Record Numbers for Round One in Buttonwillow 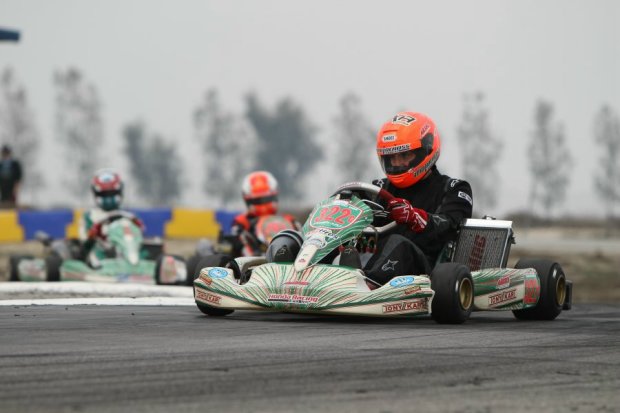 The California ProKart Challenge began the 2013 season for the Superkarts! USA organization as the flagship regional program hosted its opening round at the ButtonwillowRacewayPark on February 1-2. A record number of entries for the program under the SKUSA banner converged on the Buttonwillow, California facility, with drivers coming from as far as Texas, Hawaii and Canada to fill out the 150 total for the event.

“This weekend was just exciting,” stated Superkarts! USA President and California PKC promoter Tom Kutscher. “It was incredible to have 150 drivers and their families in the paddock. The atmosphere was so cool, and everybody was having a great time. It felt like the early days of the ProKart Challenge, people just out at the track for the love of the sport. The racing was outstanding, and to have the numbers we did across the board was awesome.” 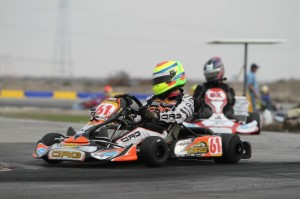 The racing was exciting, with some recognizable names and some new faces at the front of the fields on the weekend. A familiar name was at the top of the Pure Karting TaG Senior qualifying sheets, as defending S1 champ Fritz Leesmann returned to the TaG ranks with fast lap of the session. His 48.486-second lap was quicker then young drivers Austin DeMent and NorCal transplant from Michigan Alex Keyes – making his TaG Senior debut. Leesmann set the pace early on in heat one, but Keyes took over the point and went on to score the win. Leesmann sat on his bumper to the checkered flag, with former PKC champ Travis Lowe running third. Keyes led the entire second heat race, pulling away to a three-second advantage as Lowe edged out Leesmann for the runner-up spot. Leesmann was the early charger in the 20-lap main event, taking over the lead from Keyes on lap three, but retired a lap later when with a broken coil wire. Keyes retook the top spot and would hold the position to the checkered flag, scoring his first PKC victory. Austin Elliott advanced up from eighth to second, scoring the fast lap of the race, while Mason Daughters recovered from 12th on the grid to place third. Mason Marotta and Jess Peterson rounded out the top five.

Billy Musgrave marked his SKUSA SuperNationals debut with a victory, and opened up the 2013 season with a solid weekend in his Extreme Karting/Vemme S1 Pro Stock Moto debut by scoring a near perfect event. Ryon Beachner opened the day with the fast lap in qualifying, posting a 47.114-second lap. Defending series champion Jimmy McNeil was second, with Musgrave third. A great jump by Musgrave propelled him into the lead on the opening lap of heat one, and he went on to lead all 10 laps for the win. Beachner was second with McNeil back to third. Musgrave put a stamp on his opening event in the S1 category, winning the second heat and going wire-to-wire in the feature race for a five-second victory. McNeil and Beachner continued swapping, with McNeil getting the advantage in the feature for the runner-up spot as Beachner ran to third. Alec Gumpfer ended his opening weekend in S1 category in fourth, with fellow Hawaiian native Cody Hodgson making his return to PKC action in fifth. 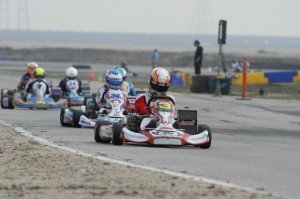 Brenden Baker led the TaG Junior field much of the day and secured the feature victory on the final lap
(Photo: dromophotos.com)

The Buddy Rice Karting S2 Semi-Pro Stock Moto looked like a SKUSA Pro Tour race with 20 drivers on the grid in Buttonwillow welcoming a number of new faces to the category, but it was defending PKC S4 champion Robert Marks that showed the way at the end of the day. Marks qualified fourth overall in the S1/S2 combined grouping, edging out Texan Connor Wagner for the pole position in class by five-hundredths of a second. Wagner got the better of Marks in heat one, jumping off the line in first and leading all 10 laps. The two got off the line together to begin heat two, but Wagner held off Marks early on and to the checkered flag for the win. They continued running 1-2 in the feature, but got mixed in with an S1 driver late in the race with Wagner putting a kart between him and Marks. Wagner led up until lap 18 when his engine seized, giving Marks the lead and the victory as he crossed the line 10 seconds ahead of Vivek Tandon and Troy Diede.

Despite the departure of some racers in the Leading Edge Motorsports S4 Master Stock Moto class, 17 drivers filled the grid for round one. Returning driver Fernando Diaz went right back to where he was before taking some time away from the PKC, at the top of the time charts in qualifying with a 48.339-second lap. Rob Logan and Ken Schilling completed the top-three in the session. Logan retired early on in heat one with an airbox issue, leaving Diaz alone out front for the win – with Schilling a few seconds behind in second. Those two, however, retired early in heat two as contact spun both drivers around and out of the race. This put Jim Kidd and Mike Mantel, who worked his way forward after qualifying 13th, at the front of the field. Kidd edged out Mantel for the race win, with Brad Dhesi a close third. Mantel grabbed the holeshot to lead the opening laps of the Main Event, while Rob Logan began his charge from the back of the field. Logan would make it all the way to the front by lap seven with the fast laps of the race, and would dice with Mantel a few more times before regaining the lead on lap 13 and holding onto the position to the checkered. Logan, however, would be moved to second on podium for passing under a yellow flag during the race. That placed Mantel on top of the podium with Logan dropped to second, as Kidd, Dhesi, and Darrell Tunnell completed the top five. 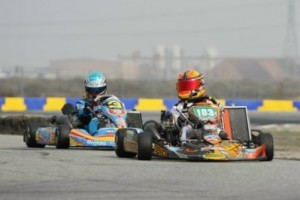 The Mike Manning Karting TaG Master category saw defending champion Billy Cleavelin on top, as the three-time SuperNationals winner started the new season with the feature victory. Cleavelin was quickest in qualifying, laying down the only sub-50 second lap, with Paul Bonilla and Ethan Wilson not far off his time. Cleavelin held off a charge from Kevin Manning in heat one, but Manning struck in heat two as he scored the win. Cleavelin fell to the tail of the field on the opening lap and fought his way to fifth behind Steve Dzurilla, Paul Grey, and PKC newcomer Terry Chen. Contact between Wilson and Bonilla put them down to ninth and tenth in the order in the race. It took Cleavelin nine laps in the feature to return back to the top spot, working around Manning for the position. From there, he pulled out to a two-second advantage over Manning for the victory. Wilson bounced back to finish third, with Dzurilla and Bonilla capping off the top five.

Brenden Baker swept the opening weekend in the Phil Giebler Racing TaG Junior class, but not without a fight all day. Baker showed the way in the timed session with a lap of 49.447, edging out defending champ Carter Williams by less than a tenth of a second. A great battle in the first heat put the top four within one second at the line, as Baker scored the win ahead of Christian Brooks, Noah Grey and Williams. Baker ran away with the race in heat two thanks to some early contact shuffling up the field behind him, pulling out to a four-second advantage after 10 laps. Brooks recovered to finish second with Willy Axton in third. Williams, who finished fifth in heat two, charged early in the Main Event as he put the pressure on Baker. The two went back and forth throughout the 20 laps, coming down to the final lap when Carter experienced motor issues. Baker secured the lead with a pass in turn two, and held on to score the victory, as Brooks and Axton drove past Williams to the podium. 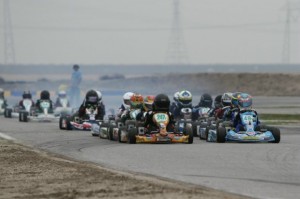 NorCal driver Jarred Campbell scored his first feature victory in S5 Junior Stock Moto, sponsored by SwedeTech Racing Engines. Defending champ Carter Williams was the top qualifier (48.461), and drove to the win in heat one. Heat two saw Campbell continue charging forward after a tough qualifying effort. He took the lead on lap three and sped away with the win, as Williams trailed on his back bumper. The two continued to show the way in the feature race, with Williams leading early on before Campbell retook the spot. They ran nose-to-tail the entire race, with Campbell able to edge out Williams for the victory. Garrett Dixon completed the podium in his S5 debut. In the same race group, Luke Bianco won the Leading Edge Motorsports S4 Magnum Stock Moto division, outrunning Ken Manning and Harris Koenig while the 2 Wild Karting S3 Novice Stock Moto division saw William Vogel score the win.

The TaG Cadet class, sponsored by Sunshine Daydream Creations, welcomed its largest field ever with 22 drivers lined up on the weekend, thanks in part to the new Mini Rok engine program SKUSA and Vortex offered up for the 2013 season. Some of the new faces were seen at the front of the field, with Jonathan Shone securing the top spot in qualifying with a solid lap of 54.158 seconds. The opening heat race would be Trenton Sparks at the front after Shone dropped down the order on the opening lap. Sparks led all 10 laps to score the win by six seconds. Shone came back in the second heat, running down Sparks to take the lead on lap nine and earning the win. Shone proved to be too much for the competition in the Main Event, pulling away and leading all 13 laps for his first PKC victory. Sparks was a solid second, with PKC newcomer Myles Farhan completing the podium. Ryan Schartau and Oliver Calvo put four new TaG Cadet drivers in the top five.

The California ProKart Challenge will continue on March 1-2 as the series hosts round two at the Willow Spring International Raceway in Rosamond, California. Superkarts! USA would like the thank the following companies, in addition to the support of the class sponsors, for their aid toward the 2013 season: MG Tires, Mothers Polish, Honda/HPD, VP Racing Fuels, Motul, MIR, and AiM. Stayed tuned to www.superkartsusa.com for information on round two, as well as updates on Twitter at @SuperKartsUSA and at Facebook.com/SKUSA.