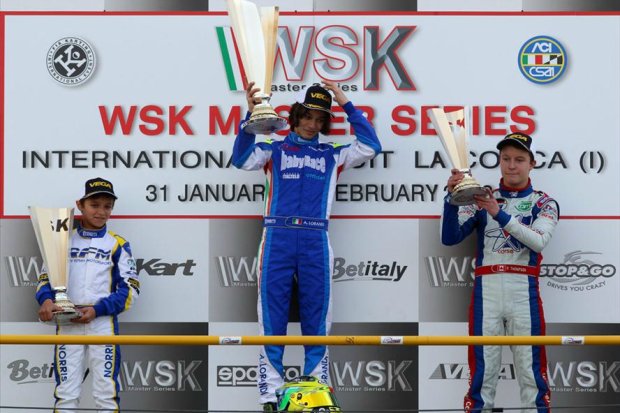 The 2013 season in Europe got underway this past weekend (February 1-2), with the running of the WSK Master Series event at the La Conca International Circuit in Muro Leccese, Italy. The series, based around four Italian circuits, gave many of the factory teams and top drivers from across the globe a chance to begin their year at the popular facility. Seven North American drivers contested the event, with two Canadians – Lance Stroll and Parker Thompson – reaching the podium in their respective categories.

American Dalton Sargeant, now racing for the prestigious Tony Kart Racing Team, was the top qualifier of the three North Americans in the KF field. He and Stroll (Chiesa Corse/Zanardi/Parilla) were able to gain spots in the SuperPole session, ending up fourth and 10th respectively. Stroll, however, made it through the heat races unscathed, placing fourth twice and sixth in his final qualifying race to sit sixth overall. Sargeant ran third and sixth, but a 23rd in his final heat race dropped him to 17th overall.

Unfortunately for Sargeant, he was a ‘DNS’ in the Prefinal, after multiple pace laps fouled the spark plug. Stroll drove to a fourth place finish in the 16-lap Prefinal to start the 20-lap Main Event from outside row two. After a clean start, he fought hard in the top-five for the entire race. Running fourth in the closing laps, the leader Karol Basz (Tony Kart) broke while receiving the final lap signal. This moved Stroll up to third, and he caught the leaders at the stripe as they made heavy contact coming to the checkered flag for a photo finish (http://www.youtube.com/watch?v=FKrTyOJTJbQ).

Sargeant put in a stellar drive, coming from the tail of the field to finish an impressive seventh in his KF debut. Canadian Zachary Claman-Demelo (CRG Spa) recovered from a tough qualifying effort and worked his way into the top-15 by the end of Sunday. Qualifying 36th, he drove forward in each of the three heats, including a fifth place finish in the final outing to advance up to 19th in the standings. Gaining three spots in the Prefinal, he gained another three in the Final to end up 13th in his KF debut.

The KFJ division had two racers from the United States, and two from Canada. Thompson (Energy Corse) flew the Canadian flag to the podium for a second time on the weekend. American Logan Sargeant (Ward Racing/Tony Kart) matched his brother’s performance, and was the top North American in qualifying with an eighth place result.

It was Thompson however that shined in the heat races, bouncing back from 26th in qualifying. He ran to top-eight results (2, 5, 7, 8) to end up sixth in the standings. Thompson ran second for most of the Prefinal B, crossing the line in third, but was moved up to second after a penalty. Starting outside row two for the Main Event, Thompson fought inside the top-five in what was a wild 20-lap race, and was just edged out for the third spot at the line (http://www.youtube.com/watch?v=4En-EpF0A7M). A penalty however advanced him to the third position, and a podium in his European debut.

Thompson talked with TKart Magazine after the race about his podium finish and making the transition to KFJ from Rotax.

Mixed results for Sargeant in the heat races (3, 21, 12, 4) put him 18th in the standings, and a DNF after two laps in Prefinal B kept him from transferring to the Main Event. Keyvan Andres (Keitzer Racing/Zanardi) also carried the American flag, although we have not confirmed just where he is from. Andres qualified 42nd, and made up ground in the heat races (16, 19, 4, 12) to end up 28th. In Prefinal B, he drove to eighth in the race. Andres, however, was involved in a wreck on lap seven to end his race on the sidelines. Canadian Devlin DeFrancesco (DFR/CRG) had a tough weekend. Qualifying 29th, he was 44th after the heat races (9, 25, 19, 20) and was a DNF in Prefinal B after the opening lap.

Many of the racers will again be racing again in Europe in just two weeks (February 15-17), as the 18th annual Winter Cup of Lonato at the South Garda Karting Circuit will host over 280 entrants in Italy.