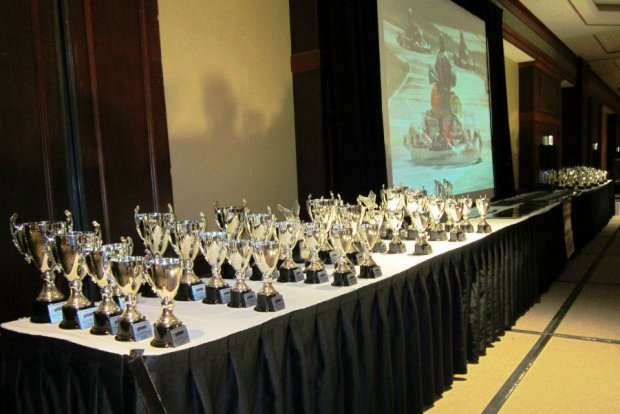 Over 200 people attended the 2012 Route 66 Series awards banquet on the evening of January 26 where over $60,000 in awards and merchandise were given out.  The banquet was held at the elegant Crowne Plaza Hotel ballroom in Springfield, IL.  Awards were presented to the point champions from 15 classes with 92 positions being awarded to the drivers in attendance.  Some classes were awarded as far back as 10th position with the remaining classes awarding at least the top five in season points.

A 60 inch monitor was setup for the drivers to show some GoPro videos while the adults socialized during the cocktail hour preceding the dinner.  Following the dinner, master of ceremonies Rick Fulks, who served as race director throughout the season, began the awards presentations.  As the class point champions were called to the stage, high energy music was played by the DJ when the class champion was recognized.  Some class champions gave a brief speech to thank their supporters.  Recognition awards included crystal eagle trophies for class champions and silver cup trophies for 2nd through 10th in points.  Double class champions received unique crystal trophies for their feat of winning their class on Saturday and Sunday. During the awards presentation, each driver’s photo was projected onto a screen showing their kart in action from one of the season’s events.

Series appreciation awards were given to the following series officials and supporters:

The following sponsors were given appreciation plaques:

All drivers receiving awards were entered into a drawing for a Top Kart chassis which was won by Alec Evers.  Many of the drivers were also eligible for engine award drawings.  Engine drawings were held for four Yamahas and a TAG Leopard.  Winners of the Yamahas included Maks Kowalski, Tommy Burke, Michael Gerringer and Adam Crepin.  Nicky DeFronzo won a TAG Leopard engine.

At the conclusion of the awards ceremony, more socializing and dancing to a DJ took place along with viewing of racer’s favorite GoPro videos from the season.

The 2013 Route 66 Series race schedule has been announced with a five   event schedule that will be contested at New CastleMotorsportsPark , MichianaRacewayPark , Badger Raceway, Concepts Haulers Motor Speedway and Mid-State Raceway.  Special money races will be held at each event in 2013.  For more information about the series visit www.route66kartracing.com .