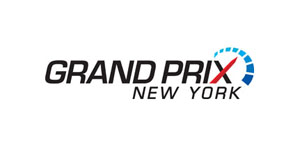 January 15 was the opening day of Grand Prix NY’s winter adult racing season. As in the past, there were three weight classes with up to twelve competitors in each class. This season’s format is a 5 lap qualifying session followed immediately by the group’s first 30 lap heat. After all the classes have run their first heat, the qualifying results are inverted for the second 30 lap heat. New this season is three additional points for pole and another point for fast lap of the class for the evening.

Starting this evening off was the GTBB (245lb) class. Returning champion Cory Rossi picked up right where he left off by grabbing pole just ahead of Gary Proft. Next on the grid was another returning veteran, Anthony Legato who was just ahead of Dave Harmon. At the drop of the green, Rossi took off while Legato quickly dispatched Proft and was chasing down Rossi. Starting on the third row, Adrian Salageanu was able to get past Harmon exiting the downhill corkscrew and was soon battling with Proft for third. At the end Rossi held off Legato for the win and Proft was able to hold on to take the final podium spot. In heat two, Rookie Doug Winston was on pole with Peter Perdikogiannis next to him. Starting from third, Louis Berrick made a great move to grab the lead by the end of lap one. In the melee, Bill Strachan was up to second but he received a black flag and had to stop for the mandatory ten second penalty which dropped him to the back of the field. By lap eight, Legato had battled his way into the lead dropping Berrick to second just ahead of Harmon. On lap eleven, Berrick got loose into the corkscrew and Harmon got into him and past which earned him a black flag.Tthat dropped him back to fourth. At the end, Legato held on for the win over Berrick and Rossi, while Harmon set the fast lap of the night trying to catch up after his penalty.

The next group up this evening was the GTO (205lb) class. Andrew Wood wound up grabbing pole a mere tenth over Gary Megennis while the second row had returning champion Dimi Vagios and Chris Johnson.  At the start of heat one, Megennis was able to push past Wood and take a lead that he would not relinquish for his first win of the season. Wood was able to hold on to second over Johnson, while Vagios was spun twice and was out of contention by mid race. In the second heat, chaos reigned. On the front row was rookie Orest Ludwig alongside Brian Maleska. Fernando Marques and Jim Patton were on the second row. While Ludwig was able to hold on to the point for the first four laps, Marques, Maleska and Vagios were all taken out. This prompted a red flag to sort out the mess. A few laps later another red flag was thrown to sort out even more messes. At this point, Ennis Bragg, last year’s champion had moved up front and out of the carnage followed closely by Wood. That is how they would finish with Johnson rounding out the podium.

The final group this evening was GTU (175lb). Megennis and Wood are running both GTO and GTU this year and found themselves first and third respectively with Mark Eickelbeck in second at the end of qualifying. While the first heat was a closely fought race, there was no real passing going on, so Megennis clinched his first GTU win of the season with Eickelbeck second and Wood third. Heat two had rookies Mark Nievariarvski and Tremeur Arbor on the front row and Will Eickelbeck and Dave Lapham in the second row. At the drop of the green, Tremeur and Mark got into each other sending Tremeur to the back of the field, while Jonathan Lally was able to move into second from his fifth starting position. Lally was into first by lap three while Will and Lapham diced mightily until the half way point. Lally would notch the victory and Megennis would snatch second away from Lapham with five laps left. Lapham held on to finish on the podium.