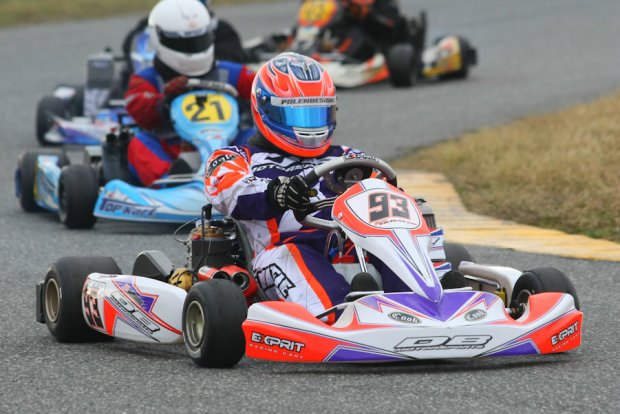 The 2013 season got officially underway just before the calendar turned over to the new year, as WKA hosted Daytona KartWeek in the days between Christmas and New Year’s Day. Three different events took place in and around the ‘World Center of Speed’ – the Daytona International Speedway – as the Dirt World Championships, the National Road Racing Series and the Manufacturers Cup Series all hosted racers from around the country to the coast of Daytona Beach, Florida. While great racing took place on both the dirt and the big track, the 2013 Manufacturers Cup Series event kicked off with a number of drivers earning double wins on the weekend. One driver nearly swept the weekend in his category, as TaG Masters driver Brian McHattie ended the 2012 calendar year strong with victories in Daytona. His efforts garnered him the honor of eKartingNews.com Driver of the Month for December 2012.

McHattie began the season as the defending SKUSA Pro Tour champion, and started out the year with a rough opening event. With a couple top-five finishes in the summer, including a win at the Rock Island Grand Prix, he capped off the 2012 series with a fourth place run at the SKUSA SuperNationals. Making the trek to Daytona, the Ohio driver began the weekend on top. He and Colorado’s Scott Falcone tied for fast lap in TaG Masters qualifying for round one, but the pole position went to McHattie for the second fast lap in wet conditions. The track dried for the Prefinal, where Brian led all eight laps for a 1.2-second win. With the fast laps of the race, McHattie went on to lead the 14 laps of the Final race to score the victory in front of Falcone and Scott Ferris.

The following day, competition stepped up as defending series champ Ferris nipped the pole position for round two by 0.097 seconds. McHattie was able to steal the lead on the opening lap, and stayed there during the entire eight lap Prefinal with Ferris right on his bumper. The Final would be McHattie’s to win or lose, and he never put a wheel in the wrong place. Consistent laps gave Brian a 1.6-second advantage after 14 laps for his second victory of the weekend ahead of Ferris and John Ferris III.

The owner of DB Motorsports is set at returning toward the top of the SKUSA Pro Tour TaG Master program once again in 2013, in addition to the United States Pro Kart Series and the Rock Island Grand Prix. He’s looking at attending the Rok Cup USA events in Florida along with other one-off events. 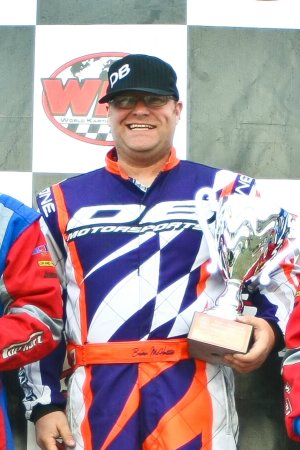 Chassis: Exprit
Engine/Engine Builder: Cook Racing Engines Vortex Rok TT
Sponsors: Cook Racing Engines, DB Motorsports, Polen Designs
Series You Compete In: SKUSA Pro Tour, Florida Winter Tour, WKA Manufacturers Cup
Years Karting: 15
How did you get started in karting?  My dad took me to a kart track near our hometown one Sunday to pass the time, he raced back in the 60’s and we both thought it would be fun for both of us to go racing together
What has been the high point in your racing career? Winning the 2011 SKUSA Pro Tour championship and being given the opportunity to race in the Granja Viana 500 in Brazil
What are your goals in racing? To help as many people as I can to enjoy the sport of karting. Winning championships is great and all, but the object of all of this is to have fun. Helping others to reach their goals and to have FUN is the ultimate goal.
In a few words, how would you describe your driving style? Aggressive but not stupid (most of the time)

Funniest moment at the race track? RIGP, 2011, Torrential downpour, I walk out of the trailer in my rain suit, look at this beautiful woman hanging out in our tent, and ask her who has a latex fetish?

Favorite Track: Pittsburgh International Race Complex
Favorite form of professional motorsports: Anything fast……World of Outlaws Sprint Cars are the most insane cars to watch.
Favorite karting driver: European Driver – Rick Dreezen or Davide Fore, both amazing talents but still very approachable and happy to talk to anyone. US Driver – Too many to list, there is such a vast talent pool of drivers that are also great people on and of the track.
Favorite professional driver: Dave Blaney
Favorite website: eKartingNews

What do you do when not at the track? Working at my sign shop or working on the race cars/karts
What are your goals outside of karting? To make a modest living doing what I love.
What type of street car do you drive? 2005 Pontiac GTO
What type of street car would you like to drive?  Cadillac CTS-V Coupe
What are your pet peeves or things that irritate you? N/A (Editor note: not answering questions is ours…HAHA)
What do you think could be done to improve the sport of karting? Less classes, sanctioning bodies taking care of the racers, treating them as customers, not the other way around. I feel people like Tom Kutscher and Andy Seesemann are treating the racers as they should be treated.
What are your favorite aspects about the sport of karting? The friendships that are made and the competition levels involved. The best karting talents are just as capable of winning in a kart as the best F1 or NASCAR drivers are.