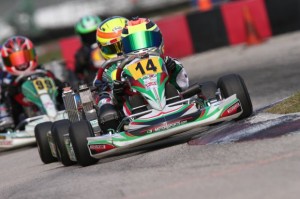 After a breakout year in 2012, ten-year-old Dylan Tavella recently began his 2013 karting campaign. Taking on the demands of the ultra-competitive and popular Formula Kart Productions Florida Winter Tour (FWT) for the opening Rotax weekend, the up-and-coming driver would be near the top of the time sheets of the Rotax Micro Max class throughout the event. The GT7 Motorsports/TonyKart entry proved potent, as Tavella battled back from adversity on multiple occasions and left with a podium trophy in hand.

Taking on the Palm Beach International Raceway (PBIR) in Jupiter, Florida for the first off three Rotax weekends with the FWT, Tavella was quick from the get-go. With qualifying sessions for Saturday and Sunday’s wheel-to-wheel action both taking place on Friday afternoon, Tavella would need to be on his game to start near the front of the field. Clocking third fast in the first official on-track session, which set Sunday’s grid, the Brookville, New York resident would be back on track later in the afternoon and post fifth out of 43 drivers.

In Saturday’s racing action, Tavella would finish last in the prefinal due to an incident and be forced to start the day’s main event from the tail of the field. Credited with fast lap of the race, the 2012 Pan Am Micro Max champion was quick at the PBIR circuit and proved his prowess during the final. With heavy rains falling, Tavella was able to use his wet weather skills and his fast kart to slice and dice through the field from his last place starting position. Making his way all the way to the second place, laps ran out before the young gun was able to make his bid for the win. Taking second by only a slim 0.274 seconds behind the race winner, Tavella’s feat was impressive as many noted it was one of the best races ever seen.

Sunday started out much the same for the GT7/TonyKart pilot. Another accident in the prefinal put Tavella last on the grid for the final race. Able to pass 21 karts, Tavella completed his opening FWT event with a solid 13th place finish.

Next up for Tavella is the Homestead round of the 2013 Florida Winter Tour. Set for February 22-24 at the Homestead Karting Complex, located on the grounds of the Homestead-Miami Speedway, the fourth year racer will make his second appearance at the permanent parking lot facility for the second stop of the series.