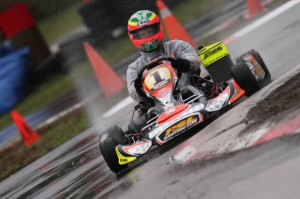 With the 2013 karting season now in full swing, karting powerhouse Team PSL Karting was back in action at the opening rounds of the popular and ultra-competitive Florida Winter Tour (FWT) this past weekend at the Palm Beach International Raceway (PBIR). A talented squad of 16 drivers across all seven Rotax classes kept the team tent abuzz, as did the unpredictable weather conditions of the West Palm Beach area. The potent PSL/CRG combination is never one to rule out, and several Team PSL Karting drivers rose to the occasion during the Rotax opener.

“Our results were strong in almost all classes, as we displayed good pace and consistency with the CRG product,” explained Dominic Labrecque, PSL Karting Team Principal.

“Building the right combination of drivers and mechanics for FWT Championships is quite difficult. I believe we have a good balance of both to maximize results,” added Andrew Campbell, PSL Karting Team Manager.

Leading the charge for the team was three time and reigning Rotax DD2 Masters World Champion Cristiano Morgado. Bearing the #1 number plate, Morgado lived up to his status, as the South African claimed both main event victories to start off his FWT campaign right. Morgado’s two qualifying efforts on Friday put him in the mix near the top of the sheets, claiming fifth quick for Saturday’s action and third for Sunday. Official wheel-to-wheel action would truly see Morgado rise to the top. Even with Saturday’s deluge, Morgado claimed the prefinal and final wins, as well as fast lap honors in each. Sunday was much the same for the 33-year-old, as he went on to again sweep the day earning max points with the prefinal and final win, again posting fast lap in each. 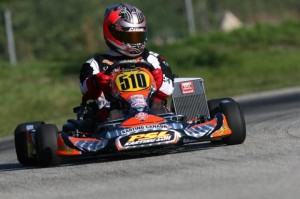 Scott Campbell started off his 2013 FWT campaign with a podium on Saturday and top-five finish on Sunday
(Photo: INTL-KartingMedia.com)

Fellow Rotax DD2 Masters pilot and 2010 Rotax Masters World Champion Scott Campbell was also on his game in West Palm Beach. The 2012 World Finals runner-up to Morgado joined him on the podium on Saturday, as Campbell drove to a second place podium finish after qualifying fifth and finishing the prefinal third. Campbell then just missed out on a second podium on Sunday, but earned a solid fourth place finish to complete his FWT opening weekend. PSL’s Andrea Fonseca added to a strong DD2 Masters effort with two sixth place final finishes.

Another podium finish for Team PSL Karting would come via Rotax Masters pilot Francisco Marques. Running in the dry for the prefinal on Saturday, the Brazilian would advance from his ninth place starting position to finish fifth in the prefinal. Wet conditions for the final saw Marques advance even more, taking the final podium position and fulfilling his goal of earning a FWT podium.

The remaining classes would see mixed results for Team PSL Karting drivers, as they endured the stiff competition and full fields the Florida Winter Tour is known for. In Rotax Junior, Enzo Bortoleto drove to a top-five finish in Saturday’s main after coming all the way from the Last Chance Qualifier. Just making his way into the day’s events, the Brazilian climbed from the tail of the field in the prefinal to finish 14th and then progressed all the way to an astounding fifth in the final. Fellow Brazilian and Junior competitor Gustavo Bandeira added a top-ten and top-15 result to the team’s efforts, as he claimed 14th on Saturday and bettered to ninth on Sunday.

“We have been working hard to improve our engine program over the year,” continued Campbell. “The decision to team with Holland’s, Jacco Van Dijk of JVD Power, proved to be successful. JVD will continue with PSL for the remainder of the season providing top level engines and carburetion.” 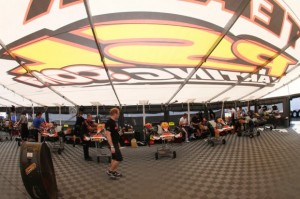 With a full tent of 16 drivers, as well as changing weather conditions throughout the weekend, Team PSL Karting kept busy during the FWT Rotax opener
(Photo: INTL-KartingMedia.com)

The next stop for Team PSL Karting for the 2013 Florida Winter Tour will be February 16-17 at the Homestead Karting facility for the Formula Kart weekend, followed by the Rotax events February 22-24. Prior to that, PSL branded drivers will be back in action on the left coast for the second round of the Rotax Challenge of the Americas, February 8-10 at Phoenix Kart Racing Association in Phoenix, Arizona.

“As we approach Round 2 in Homestead, we will look to improve on our results as PSL has much more in store for our competition,” concluded Labrecque.