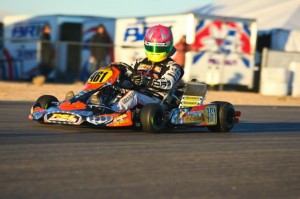 Starting off their 2013 racing season, Team PSL Karting branded drivers made waves during the first round of the Rotax Challenge of the Americas. Taking place at the Musselman Honda Circuit in Tucson, Arizona, well below average temperatures did not deter the PSL/CRG outfitted drivers. Instead rising to the occasion, PSL claimed four victories and an additional six podium finishes across six classes to start off their 2013 campaign.

Leading the charge for PSL was 2012 Challenge of the Americas DD2 class champion and Team USA member Fritz Leesmann. Looking to defend his championship title and earn a repeat trip to the Rotax Max Challenge Grand Finals (RMCGF), the California native was in fine form as he swept the entire weekend in the DD2 class. Unstoppable throughout the weekend, Leesmann earned both pole positions, both prefinal wins and the two main event victories as well as fast lap honors in all the wheel-to-wheel action.

Another familiar face with Team PSL Karting would excel in Tucson. Joining forces with Team WRS, 2011 US Rotax Grand National DD2 Master champion Alan Rudolph started off his 2013 season with a strong opening weekend in Challenge of the Americas action. Clocking first quick in DD2 Masters qualifying on Saturday, and second overall in the combined DD2/DD2 Masters category, Rudolph would make his first trip to the podium after taking second place honors in the final. Sunday started out much the same for the karting legend, but a misstep in the prefinal put him back to eighth. Capitalizing on a turn one melee during the start, Rudolph was then able to drive away to take the final win by more than ten seconds.

Two Rotax Mini Max pilots would mix it up at the front of the pack all weekend long, as Horatio Fitz-Simon and CRG West pilot David Rafailov would both be on the podium twice during the weekend. Fitz-Simon started off with Saturday’s pole position, and turned that into his maiden Challenge of the Americas victory after having to recover from a prefinal DNF. Rafailov was the model of consistency, placing third in qualifying, second in the prefinal and then earning a podium finish with his third place final result. Rafailov would then back that effort up with the prefinal win and another podium on Sunday after placing second. Fitz-Simon would move forward after qualifying ninth, earning fast lap honors in both the prefinal and final en route to a third place podium finish.

The final two podium results would come via Rotax Junior pilot Austin Versteeg and CRG West Rotax Micro Max driver Marco Kacic. Now in his sophomore season in the junior karting ranks, Versteeg made his first podium appearance in 2013 Challenge of the Americas action with his third place run on Saturday and the rising talent is well on his way to matching his three from 2012. Kacic started his campaign off with the pole position in the youngest Rotax category and endure some racy action to place third in the day’s final. Sunday saw the youngster on pole yet again and take the prefinal win, but unable to make another podium visit. 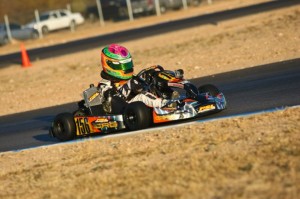 The Rotax Challenge of the Americas will resume with round two February 8-10 at the Phoenix Kart Racing Association in Phoenix, Arizona. Team PSL Karting will next be on track for the opening weekend of the Rotax rounds of the Florida Winter Tour this weekend at the Palm Beach International Raceway in Jupiter, Florida.