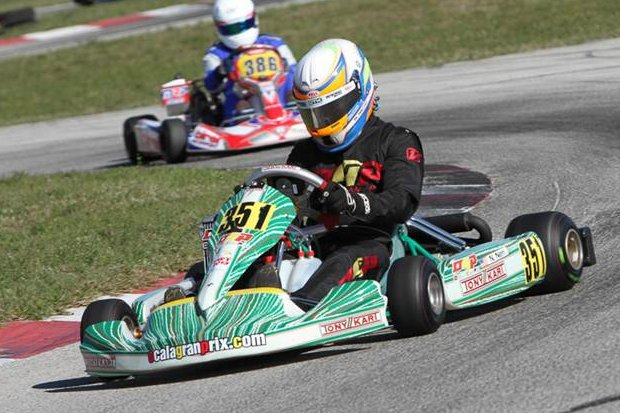 Nick Neri was one half of the OGP sweep in Senior Max qualifying
(Photo: Ken Johnson - FWT)

Just a few days removed from the opening weekend of Formula Kart Productions Florida Winter Tour, the Rotax MAX Challenge officially hits the track to set the qualifying order for this weekend’s races. After four days of practice the Rotax competitors were eager to hit the Palm Beach International Raceway track to see who would be the fastest going into the double-race-weekend.

At stake in this year’s program are six of the coveted invitations to the 2013 Rotax MAX Challenge Grand Finals. This is up from four last year with the additional spots going to the DD2 and DD2 Masters classes. This move solidifies the two-speed classes as the premier classes in Rotax MAX competition. 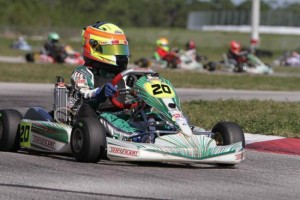 The FWT is the largest and most geographically diverse Rotax program in the world. As such we get to enjoy the many competitors who travel here from outside our borders. And they, likewise, get to sample some of the more unique activities our country has to offer. Whether it’s Universal Studios, the KennedySpaceCenter, or any of the numerous attractions spread throughout Florida, there’s always something to do for those that venture to the FWT.

One prime example of this is a particularly unique, particularly American form of entertainment; top fuel drag racing. The PBIR facility is comprised of the kart track, a full road course and an NHRA endorsed drag strip. As luck would have it, this week some of the heavy hitters of the NHRA circuit have been testing their top fuel dragsters and funny cars at the PBIR facility. For those that have never seen a top fuel car run in person, the spectacle is truly breathtaking.

Three-time Grand Finals Champion Cristiano Morgado from South Africa shared this perspective, “I couldn’t believe it when I saw them run for the first time, those things are true monsters. During one of my practice sessions, one of the drag cars was on a run and the vibration and the noise from the drag strip made me think I had a puncture!”

Even as interesting as the top fuel side show is, the pits at the kart track contain over 250 competitors focused on their own racing. We took a walk through the pits at PBIR and got to know some of the competitors. Two of them, Charlie Eastwood and Xen De Ruwe have been very successful on the world stage, and for 2013, bring their talents to the Florida Winter Tour.

Charlie Eastwood captured the Senior MAX title at last year’s Grand Finals in Portugal. For the 17-year-old from Belfast, Northern Ireland, the Grand Finals World Championship was a realization of a goal that had long burned within him. “I had wanted to win the Grand Finals for a long time, but you can’t just say ‘I’m going to win’. There are too many variables. All you can do is prepare and place yourself in the best position to win,” Charlie says with an advanced level of maturity, “With two laps to go, I checked behind me and saw a big gap and realized I was going to win. That was such an amazing feeling.”

On coming to the Florida Winter Tour, Charlie says it’s something he’s wanted to do for a long time. “I’ve wanted to come to the FWT for the last few years but couldn’t make it happen. But now, with Bill Wright providing the prize of an entry for being the Grand Finals champions and all the help from Patrick Keane, I can finally come race here and I’m so thankful for all their help.” While under the Keane tent, Charlie is also working with Junior MAX competitor Darren Keane and teaching him some of the tricks he’s learned in his eight years of racing experience. So far on this trip, Charlie has had the chance to see Disney Universal Studios and says he hopes to see more of the unique and spectacular sights while here for the Florida Winter Tour. 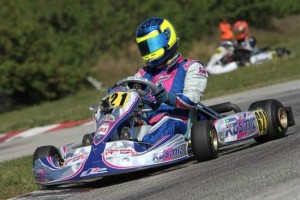 Belgium’s Xen De Ruwe hails from Antwerp and at just 19-years-old, has been racing for 15 of those years. Xen made a big impact at last year’s Grand Finals when he was leading DD2 only to have his kart quit on him. Even with the disappointment at the Grand Finals, Xen still had a very good year by also winning the Rotax Winter Cup and taking third in the Euro Challenge. Now he’s here to take his first shot at a FWT championship.

Xen says the PBIR facility and the people he’s met so far have been very nice and that has helped him stay positive through some early engine issues. “We had some engine problems early on, but that seems to be solved now,” he said. “Now, if I could just get over the jet-lag, things would be even better.” With a third and a fourth place qualifying result going into this weekends races in the premier DD2 class, Xen seems to have things sorted out.

When not racing, Xen says he enjoys working on his fitness. However, he must also stay up on his schoolwork. He says last year he made straight As in his chosen field of Interior Architecture and that having a strong educational background is very important to him. Just as he impressed many with his performance in Portugal, Xen has already made an impression at the FWT and we look forward to seeing him throughout this year’s season.

In each of the two rounds of qualifying, Senior MAX was the first group to go out. In the first session which set the order for Sunday’s races, the newly crowned world champion Charlie Eastwood (NIR) set the pace throughout much of the session. Charlie stood atop the time sheets until the dying moments of the session when 2012 FWT Junior MAX champion Oliver Askew (USA) took the top spot by 0.046 of a second. In the Senior MAX qualifying for Saturday, it was Askew’s OGP teammate Nick Neri (USA) who took the pole position over Eastwood. 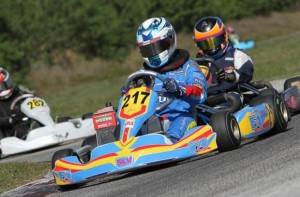 In qualifying for Saturday’s Micro MAX races, Derek Carmenate (USA) put in a fast time of 1:00.021 to qualify on pole ahead of Harry Coulton (USA). In Sunday’s qualifying session, Mexican Emiliano Richards claimed the top spot with a time of 59.774 seconds.

During the Masters turn to qualify for Saturday’s heat races, it was Brazilian Leonardo Nienkotter who stamped his authority on the field by turning in a fast time of 54.562 seconds. Although Scott Falcone (USA) had to settle for second behind Nienkotter for Saturday’s races, he was fastest overall in Sunday’s qualifying session with a 54.425 second lap to set pole position.

After taking the Formula Kart TaG Junior class by storm last weekend, New York’s Jack Weprin continued his speedy ways by qualifying on pole position for Saturday’s always competitive Junior MAX class heat races. In Sunday’s qualifying session, it was Jamaica’s Thomas Issa, fresh off a trip to the Grand Finals, who took pole position with a quick time of 53.941 seconds. In doing so, Thomas was the only Junior MAX driver to officially get under the 54 second mark on Friday. 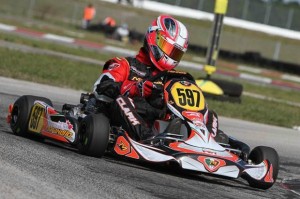 Texan Nicholas Brueckner laid down the law in both Mini MAX qualifying sessions to claim pole position for both days on the weekend. In a class that arguable features the most competitive Mini MAX grid in the world, this is quite an accomplishment. However, starting second on both days is Anthony Gangi jr. (USA) who is coming off a very successful FWT Formula Kart Racing FWT weekend. This will definitely be a class to watch.

With three Rotax World Champions representing five championships in the DD2 Masters field, we knew there would be fireworks. When the dust had settled from Saturday’s qualifying, it was 2007 Masters Champion Christophe Adams of Belgium setting fast time just ahead of Canada’s Stuart Clark. In Sunday’s qualifying, it was Clark that captured the top spot just ahead of 2010 Grand Finals DD2 Masters champion Scott Campbell (Canada), and 2011 and 2012 Champion Cristiano Morgado (South Africa). 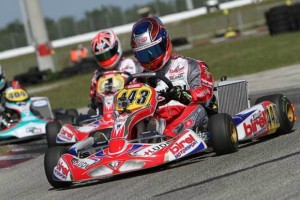 The fastest of all Rotax classes took to the track last and it was worth the wait. Both sessions featured a fierce battle between Kevin Lüdi (Switzerland), Ben Cooper (Canada), Xen De Ruwe (Belgium) and Darrin White (Canada). Although the top spot traded hands several times in both sessions, when the music stopped it was the Swiss driver, Kevin Lüdi on top of the times sheets for both sessions. With triple world champion Ben Cooper sharing the front row both days, this is one race that is a must see on FWT Live!.

If you’re anywhere near South Florida you owe it to yourself to come check out the Florida Winter Tour. And if you can’t make it in person, log onto FloridaWinterTour.com to watch the action live with FWT LIVE!.