Winter Kart Show A Must See in Springfield Next Weekend

One of the longest running winter kart trade shows and swap meets sponsored by the Mid-State Kart Club (MSKC) of Springfield, IL will again return to the Illinois State Fairgrounds Orr Building on January 26 and 27.  After a very successful and nearly sold-out show in January 2012, the Winter Kart Show is returning to the 40,000 square feet Orr Building at the Illinois State Fairgrounds and expanding to two days of show hours.  This show will provide a rare opportunity to see many of the new 2013 kart racing chassis models all in one location along with many new and used kart parts for sale.

Last year’s show had new sprint karts on display from manufacturers such as Margay, Merlin, Corsa, Birel, DR, Tony Kart and PCR. This year will also see karts on display from CRG, Intrepid, Praga and Top Kart. Many kart racing tracks and series will also be giving out information.  Major kart shops such as TS Racing, MKP, Franklin Motorsports, Laukaitis Racing and Kart Warehouse USA will be in attendance with a large inventory of parts and great show specials. Helmet, safety apparel, kart suit, engine builder, kart stands and kart graphic vendors will also be in attendance. Approximately 100 vendor and swap booths have been pre-sold with vendors attending from as far away as California and Florida. 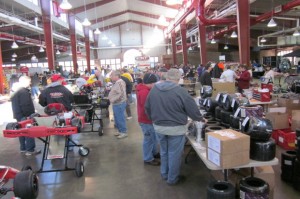 The Winter Kart Show will see over 100 vendors inside the 40,000 square foot building in Springfield, IL
(Photo: winterkartshow.com)

The MSKC Winter Kart Show and Swap Meet is scheduled for Saturday January 26 (10 am to 3 pm) and Sunday January 27 (9 am to 2 pm). General admission is $5 for adults with children 12 and under admitted free. MSKC President Russ Kemple stated, “We wanted to offer a centrally located facility for all kart industry vendors to show their new products in the off-season and not charge them an arm and a leg.  This show may be the largest sprint kart vendor show in the U.S.”

Proceeds from the show will benefit the Mid-State Kart Club and allow them to make track repairs and upgrades to the club owned facility, Mid-State Raceway. In 2012, the club repaved and reconfigured the track as well as upgraded the paddock layout. “I’ve been president for two years now and I’m very proud of the club’s growth and improvements in that time. Every update the club does is voted on by the membership. Future ideas include adding LED lighting all around the facility for safety. We have to repave the North Turn at our track, and it will be a priority for the coming season. The recent pit improvements are very cool, as it makes you feel like you are at a new track.”

The show shuts down a little early on Saturday afternoon so that people can attend the Route 66 Sprint Series awards banquet which is being held at the CrownePlaza in Springfield at 4:00pm. Roughly $60,000 in prizes will be awarded on the night. “We are thankful that Mark Coats has coordinated the series banquet with the show. It is one banquet you want to be at, even if you have not raced with the series with all the many prizes they have available just for attending. I was told there will be a number of new chassis given away at the show, which is amazing. We expect to double last year’s attendance numbers and we already have more vendors, thanks in part to the Route 66 Sprint Series banquet in town the same weekend,” continued Kemple.

eKartingNews.com is schedule to be on-site, both at the Route 66 Series banquet and the show floor, to bring photos and videos on the weekend.