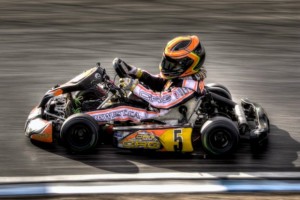 On Saturday Marco Kacic qualified 1st out of 17 karts. In Saturdays pre-final Marco was in an intense battle for the lead with four other karts. The five drivers spent the entire race swapping the lead. Marco was only able to place fifth in the per-final. In Saturdays final Marco was once again in a five kart battle for the lead. He was in second position on the last lap when they caught lap traffic. The lapper pushed Marco wide and it allowed a kart to get ahead of him. Marco had to settle for third position in Saturdays final. He was happy with the podium but he felt he had the speed for more.

On Sundays race, Marco once again put his Team CRG West CRG Kart on pole position. In the pre-final, Marco paced himself and sat in third position for most of the race and let the first two drivers fight it out. With two laps to go Marco made his move into second and on the last lap Marco passed for the lead and won the pre-final race. For Sundays final race, Marco started from the number one spot. Off the start into turn one Marco got pushed wide and dropped back to seventh out of turn one. Marco was setting the fastest laps on his way back to the front. Unfortunately Marco pushed a bit to hard and spun off the track. He was able to get back on track and continue but Marco was only able to recover to a 8th place finish.

Marco was obviously very disappointed about Sundays final race because he felt that he had the speed to win once again.

Quote from marco: I was happy with my speed but not the end result. I cant wait for the next race to get back to the front. Thank you to MIR, CRG, PSL Engines and CRG West.