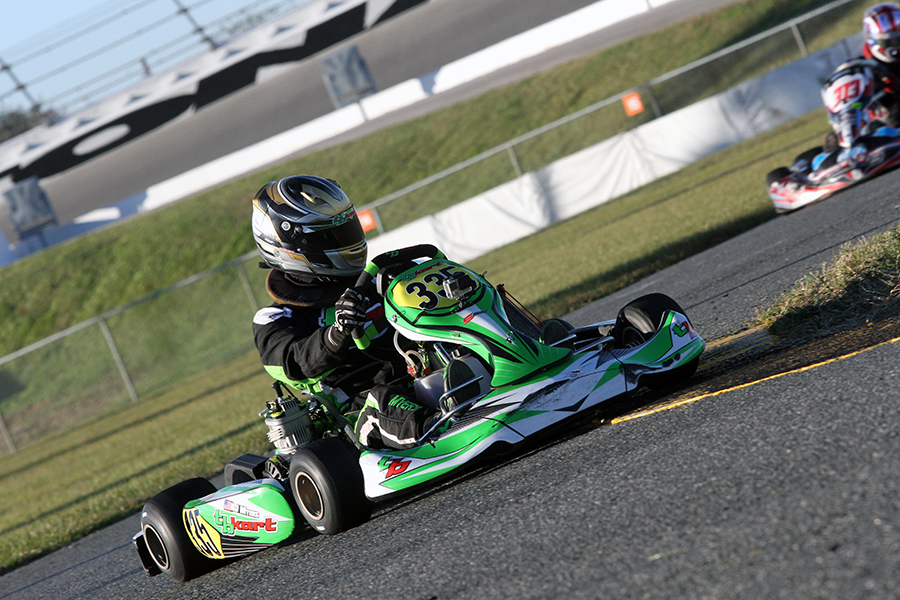 The final day of the 2017 WKA Daytona KartWeek provided the second round of racing, which begins the 2018 championship chases for the organization. The weather for the annual pilgrimage south to the Daytona International Speedway improved on Day 2, with the sun coming back for the final day of racing. The temp increased from yesterday, as did the heat on the track with competitors getting extra aggressive in all the nine categories.

366 days ago, AJ Myers was able to claim victory in Daytona in the IAME Senior division. The field of 40 drivers was stacked this year, and Myers suffered issues Saturday to take him out of contention after showing strong pace on practice day. For Day 2, Myers drove his TB Kart USA entry to victory for his second straight at Daytona KartWeek. Myers was fourth in qualifying behind top qualifier Austin Garrison, making his Fullerton debut. Myers was shuffled down to 12th on the opening lap of the Prefinal but fought his way back to eighth. Garrison walked away with the Prefinal win, and looked to be in a similar position in the Final. Garrison led early with Myers getting a great start, jumping to fourth and was into second by lap five. Myers ran down Garrison and was into the lead by lap 14. From there, Myers pulled away to a two-second victory to claim a second straight in Daytona. Garrison was nipped by Saturday winner Teddy Wilson (MDD / FA Kart) for the second spot. Austin McCusker (MDR / Kosmic) was fourth with Brandon Jarsocrak (KSNA / Praga) rounding out the top-five. 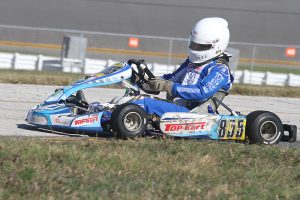 Alexander Kardashian made it known that he is the driver to beat in 2018 for the Yamaha Senior title. The 2017 vice-champion dominated the day as he did in Day 1, leading every lap of every session. Earning fast time in qualifying by two tenths of a second, the AMK / Top Kart driver drove to a six-second advantage in the Prefinal before a 16-second margin in the Final for his third victory at Daytona in two years. The fight all day was for second, with Nate Dean (Top Kart) edging out Carter Pease (Top Kart) and Joshua Fierke (Top Kart) while Evan Stamer (Margay) completed the top-five.

The event was a swept in KA100 by Senior rookie Colin Neal (VemmeKart). Neal went Day 1 leading all the sessions, every lap. It was a repeat on Day 2, driving away to a two-second advantage in the Final. Brad Brittin (Merlin) won the battle for second, bouncing back from a rough outing on Day 1. Blake Hunt (Fullerton) ran fast lap of the race, placing third ahead of Emory Lyda (Merlin) and Abby McLaughlin (Top Kart).

Another driver to repeat a victory from 2016 was Zane Maloney (Tony Kart). The driver from Barbados made it a sweep on the day, challenge by fellow 2016 winner Tyler Gonzalez (Tony Kart). Maloney was top qualifier and won the Prefinal, all with Gonzalez right there. The pressure turned up in the Final. Gonzalez tried a move into turn one, however, Maloney shut the door. This gave him enough room to drive to the victory, with Gonzalez sitting second. Edward Portz made the trek from the west coast for his first Daytona KartWeek, driving for the first time on the Fullerton chassis. Portz qualified third, and held it through the Prefinal and Final after a rough Day 1. Caleb Bacon (Tony Kart) also improved from yesterday, driving to fourth ahead of Josh Green (Tony Kart). 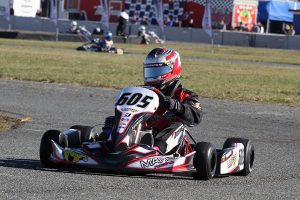 Spike Kohlbecker won in Daytona back in 2015 in the Yamaha Junior division. Two years exactly, Kohlbecker returned to the top step of the podium. The Margay driver was able to get away from the field in the Prefinal, repeating the feat in the Final. Kohlbecker led all 20 laps for his second Daytona victory in three years. Tyler Ferris (Top Kart) was the top qualifier on the day, placing second to Kohlbecker. Ian Quinn (Tony Kart) advanced from seventh to the third step on the podium, ahead of Junior rookie Garrett Adams (FA Kart) and Bryson Morris (FA Kart).

The Mini Swift division, featuring 45 drivers, was a wild one. Day 1 winner Mateo Rubio-Luengo (Benik) qualified on the pole position, and was among those fighting for the Prefinal win. The Mini rookie reached the checkered first, however a penalty for contact with Jeremy Fletcher (Kosmic) dropped him down to 34th on the grid for the Final. That put fellow Mini rookie Christian Miles on the pole position for the main event alongside IAME International Final champion Brent Crews (Nitro Kart). Miles was shuffled toward the back, with Logan Adams (Benik) jumping up to the lead over Crews. Adams held a solid lead until he was run down by Crews. The two went back and forth over the final laps, with Crews coming away with the victory. Adams settled for second with Lucas Rodriguez (Benik) joining them on the podium. Fletcher, who started 33rd, climbed his way forward in the 20-lap main event with fast laps of the race to finish fourth. Anderson Leonard (Nitro) completed the top-five. Connor Zilisch (Energy) was another driver to climb his way through the field with issues on the Prefinal grid prevented him from starting in the P2 slot. From the back of the field, Zilisch drove to seventh while Annie Rhule (Energy) coming from 21st to eighth. 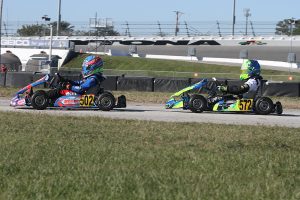 The top spot in the Yamaha Sportsman division was a revolving door. Thomas Schrage (PCR) set fast time in qualifying, shifting down to second with Connor Zilisch (Energy) taking the win. Logan Adams (Benik) was slotted in third at the end. He and Zilisch locked up to pull away from the field. Adams took the lead on lap four, and led the remainder of the race for his first Daytona victory. Zilisch settled for second with Annie Rhule (Energy) completing the podium. Schrage and Chase Gardner (VemmeKart) rounded out the top-five.

Ben Maier (Nitro Kart) was the third driver to double up in Daytona, winning the Micro Swift main event. Bryce Sanders secured the fast time in qualifying, however, Maier took over the top position for the win in the Prefinal. Maier was able to walk away with the victory in the Final, winning by over three seconds ahead of Adam Brickley for a Nitro Kart 1-2 finish. Cameron Brinkman (Merlin) won the fight for third over Cameron Myers (Margay) and Miles Murray (Nitro Kart). 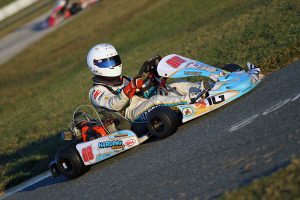 IndyCar swept the main event victories in the Margay Ignite for the ‘Dash in Daytona’. On Day 1, Zach Veach was victorious in his return back to his roots. Today, it was former SKUSA SuperNationals winner Gabby Chaves. In the hunt yesterday, Chaves returned looking for redemption. He came up short in qualifying as Battle at the Brickyard winner Charlotte Lalonde scored fast time ahead of Veach with Chaves in fourth behind Gage Rucker. Chaves held off Lalonde for the Prefinal win. Lalonde chance at victory ended in turn one of the Final after she spun around. Out front, Chaves was joined by Rock Island Grand Prix victor Jordan Bernloehr and Gateway Kartplex champ Nick Todenhaupt. Chaves eventually was able to break away, going on to score the victory. Bernloehr ran second with Justin Vancil winning the battle for third over Jordan Missig and Rucker. Veach had issues in the Prefinal, coming from 32nd to eighth while MRTI driver Juan Piedrahita placed 18th, one spot behind Lalonde.