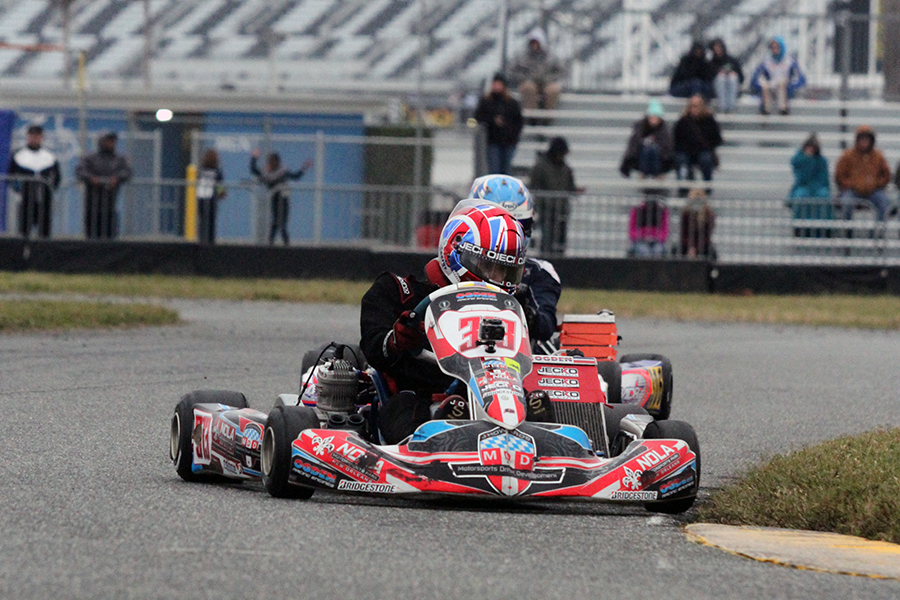 The opening day of racing at the annual WKA Daytona KartWeek was met with a wet Daytona International Speedway. The famed Daytona Beach, Florida facility is welcoming three events on its hallowed grounds, including the Margay Sprint Nationals around the infield karting circuit. Friday hosted the opening round of racing for the 2018 Manufacturers Cup Series, which was greeted with cold, cloudy, and drizzly conditions throughout the day. It was not your typical Florida weather, with zero glimpses of the sun. The action on track was not typical as well, including a number of first time Daytona winners.

Among the first time winners was British driver Teddy Wilson (MDD / FA Kart). The 16-year-old former British champion made his Daytona KartWeek debut today, battling his way to the front. The qualifying session for IAME Senior category was tricky, with the track on the verge of drying. A handful of drivers elected to go out on slicks, making the bet pay off. Former Daytona winner Austin McCusker (MDR / Kosmic) set the pace in the qualifying session, leading all 12 laps of the Prefinal with Jake Donald (KSNA / Kart Republic) on his bumper. It was Wilson however who came up from 13th on the grid to third. The inside line was the better line through the opening corner, as Donald was caught up in contact along with fourth-place starter Brandon Jarsocrak (KSNA / Praga). Wilson took the second spot and locked himself behind McCusker. Wilson measured up Austin, taking the lead at the halfway point and put down the fast laps of the race to pull out a gap. That was all Wilson needed, going on to score the victory with McCusker settling for second. The fight for third ended up going to Austin Garrison, making his Fullerton-USA debut, climbing from eighth on the grid. Alexander Kardashian (AMK / Top Kart) drove to fourth with Ryan Raffa (MDR / Tony Kart) up to fifth from 12th. 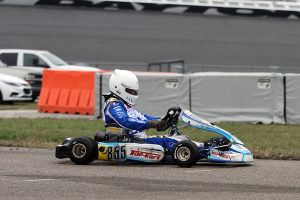 Kardashian came into the event as the favorite for the Yamaha Senior division. He would not disappoint, dominating the day from beginning to end. After securing the pole position in the wet, Kardashian (Top Kart) went on to win the Prefinal by six seconds and the 20-lap Final by nearly 14 seconds. The battle on track was for second, with Joshua Fierke (Top Kart) edging out Jeremy Fierke (Top Kart). Carter Pease (Top Kart) was fourth with Evan Stamer (Margay) in fifth.

The KA100 engine package made its official WKA debut today, swept by Senior rookie Colin Neal (VemmeKart). Neal secured fast time in qualifying, while leading all the laps of the Prefinal and Final. It was not without pressure as Blake Hunt (Fullerton-USA) and Abby McLaughlin (Top Kart) were right there throughout the day. Neither were able to make a move on Neal, scoring his first Senior victory and the inaugural win for the KA100 category in WKA competition. McLaughlin edged out Hunt for the second spot with Byron Daley (Fullerton) placing fourth with Brad Brittin (Merlin) going purple in fifth. Brittin came up from 14th on the grid after qualifying second, only to go off track on the opening corner of the Prefinal. 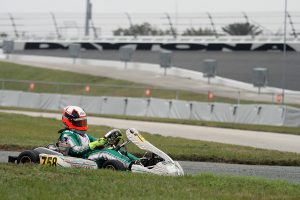 The IAME Junior provided a bit of history for the Daytona facility. There have now been two generations of Montoya’s to win at the ‘World Center of Racing’. Three-time 24 Hours of Daytona winner Juan Pablo Montoya celebrated the first major Junior karting victory for his son Sebastian. The second-generation driver continued to inch his way toward the top of the class order. Last year’s winner Zane Maloney (Tony Kart) set fast time in qualifying, and won the Prefinal, all with CRG Nordam’s Tyler Maxson and Montoya there. The three led the way in the Final, with Maloney at the point for the first half of the race. Montoya ran second, slipping into the lead on lap 11. He would hold on to score the victory, holding off Maxson at the line by 0.077 thousandths of a second. Maloney settled for third. Spike Kohlbecker (Margay) drove to fourth with Cody Krucker (Tony Kart) rounding out the top-five.

A number of drivers were in contention for the win in the Yamaha Junior category. Defending champion Tyler Ferris (Top Kart) set the pace on the wet track for qualifying, but it was Spike Kohlbecker (Margay) that came away with the Prefinal win by 72 thousandths of a second. Five drivers made up the lead group for the Final with Kaden Wharff (Top Kart) jumping out to the lead on the opening lap. He led for the first nine circuits until he was shuffled back to fourth. Within a lap, the second-year Junior driver fought back to take the lead the following lap. Wharff was able to hold on to the checkered flag, earning his first in the Yamaha category. Kohlbecker finished second, recording fast lap of the race. Ferris ended up third ahead of Donald Whorton II (FA Kart) and James Lynch (Tony Kart). 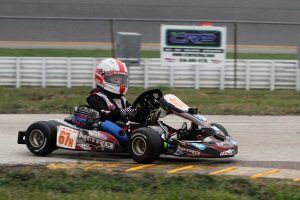 Forty-five drivers took to the track for the Mini Swift division, with a large pack in the hunt for the victory on the day. Annie Rhule (Energy) set the pace in qualifying with IAME International Final 2017 champion Brent Crews (Nitro Kart) scoring the triumph in the Prefinal. The lead group was about seven in the Final, ending up becoming a three driver fight. The 20-lap race had six official lead changes, not counting the many that took place away from the scoring loop. Connor Zilisch (Energy) jumped to the lead early from the P2 grid position. Mini rookie, making his first WKA start, took a turn at the lead as did Crews and Jeremy Fletcher (Kosmic). Mateo secured the position as they took the white flag, holding on to the checkered for the victory. Crews was second with Fletcher completing the podium. Logan Adams (Benik) held his starting position in fourth with Zilisch down to fifth.

Zilisch performed a ‘spin and win’ in the Yamaha Sportsman division. Racing for position in the Prefinal, Zilisch spun around in turn one. He dropped down to eighth but worked back up to fifth by the checkered flag. Annie Rhule (Energy) took the win in the Prefinal, and was among those in the challenge for the Final victory. Logan Adams (Benik) led the majority of the race, getting shuffled back late by Zilisch. The Rok Cup International Final champion held on to score the victory, edging out Adams. Top qualifier Thomas Schrage (PCR) drove to third, earning fast lap of the race. Rhule ended up fourth with Sebastian Ng (Nitro Kart) fifth. 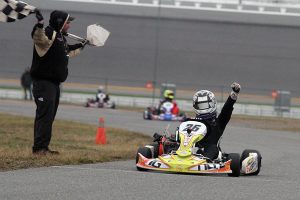 Ben Maier was another driver to earn a sweep on the day, winning the Micro Swift division. The Nitro Kart driver was super quick in qualifying, but had to fight off Danny Dyszelski (Energy) in the Prefinal for the win. It was not only Dyszelski but lap traffic as well that kept the race interesting. Maier was able to fight off both, reaching the line first for the victory over Dyszelski. Adam Brickley (Nitro Kart) had fast lap of the race, coming from 12th to the podium in third. Hoyt Mohr (Tony Kart) ended up fourth with Cameron Myers (Margay) in fifth.

The Margay Ignite ‘Dash at Daytona’ had 33 drivers in the field, with a great mix of talent and experience. IndyCar’s Gabby Chaves is not stranger to racing at Daytona, as a former regular at the WKA program. He posted the fast lap of the qualifying session ahead of veteran Margay driver Jeff Jewell and Canadian Charlotte Lalonde. The Prefinal went down to the wire with Lalonde able to slip past Chaves on the inside and IndyCar’s Zach Veach on the outside to take second. The trio finished within 96 thousandths of each other. Veach and Lalonde were able to get away from the field in the 20-lap Final. Veach led the entire way, with ‘Battle at the Brickyard’ winner Lalonde on his bumper. Veach scored his first victory in karting since the 2008 season. Lalonde will have to wait until Day 2 for a chance to win both Indy and Daytona in the same year. Jordan Bernloehr, the Rock Island Grand Prix victor, drove to third. Chaves slipped down to 11th at one point, but worked back to fourth with fast lap of the race. Mazda Road to Indy driver Juan Piedrahita drove to fifth, giving the Indy trio all top-five finishes.