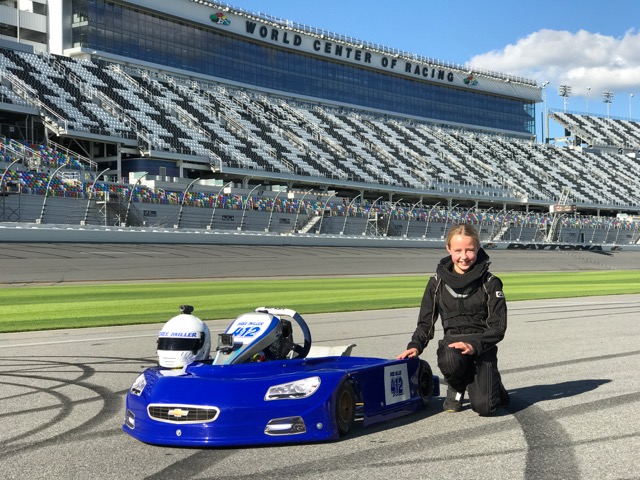 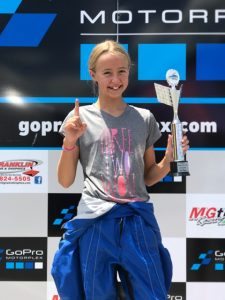 In October, Bree Miller celebrated her third year in karting. It was 2014 when she received the current Top Kart chassis that she continues to race with in the Briggs Cadet division at the GoPro Motorplex in Mooresville, North Carolina. It was a trip to the Motorplex in the Junior rental karts that switched her focus from Quarter Midgets to karting. She began racing Quarter Midgets in 2011 after turning six-years-of-age. When she started karting, there were only three drivers in the class. Now, the Karting Challenge featured a large and deep grid, hosting 27 different drivers in 2017. Miller completed the 2017 season with the vice-champion position in the Karting Challenge point standings. In total, Bree won twice and scored a total of nine podium finishes in 12 races.

“My parents were familiar with four strokes and had heard of the Briggs 206 engine before. I also wanted to start out with one of the slower engines because I didn’t know how I would like karting.”

“We live extremely close to the track and it is one of the nicest tracks in the country. The track officials are very kind and the pit area is paved. Every race there are about 13-17 Briggs Cadets that come so that makes it very fun to know everyone and have a clean race.”

Bree has recorded an unusual number of second place race finishes in her three seasons at the GoPro Motorplex Karting Challenge: three in 2015, nine in 2016, and six in 2017, with eight total race wins. She has been the only female driver in her class over the last two years. Last December, Bree was among the first Cadet-level drivers to race around the full road course and the high banks that are part of the WKA National Road Racing Series. Bree was the top Briggs 206 Cadet driver in her first race, and returned to compete again this year with her eight-year-old brother.

The option to move up to the Junior category is the decision for the 2018 for Bree. Also in her plans for the 2018 season is to do more of the WKA road races again, along with racing at other tracks throughout the year.