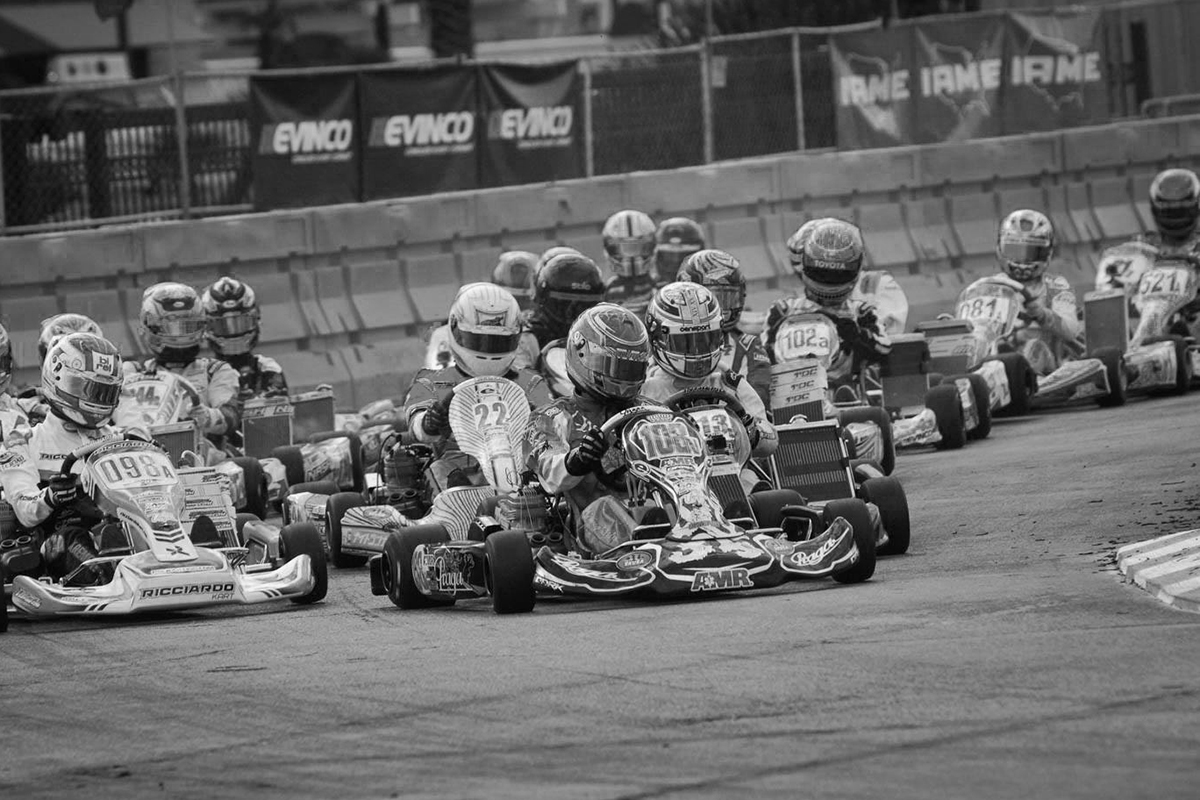 The end of the 2008 racing season marked the return of the Superkarts! USA SuperNationals to the Rio Hotel Masquerade parking lot after a four-year stint at the Sam Boyd Stadium. The ‘TaG’ explosion was in full effect, and SKUSA had opened up the entries for the category. At first, the numbers were expected to be over the 100-driver mark, but in the end, a total of 95 were logged when the official sessions took place. Now, for the 2017, that record may be topped if all 96 of the pre-registered drivers arrive in Vegas for SuperNationals 21. SKUSA opened the door for more than the scheduled 88 as in year’s past, as last minute cancellations have always kept the field from being sold out. This year, the organization put in a buffer to make sure 88 was reached with eight extras still on the driver list heading into SuperNats week. 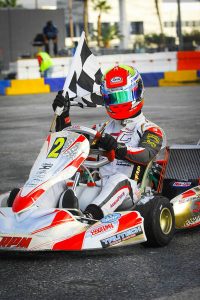 EKN TaG #1 driver Jake Craig is looking to be the first to repeat a SuperNationals victory (Photo: On Track Promotions – otp.ca)

This soon-to-be record field is ‘all in’ for one thing, a SuperNationals victory. No point championships on the line this year, there no tickets to any other event, it’s nothing but cold hard cash for the top-five finishers ($8,000 in total), and the glory for one driver of winning the largest karting event in North America. The enjoyment of the first victory was enjoyed last year by Jake Craig (RPM / Tony Kart). The California native led only one lap, the final one, to claim his first SuperNationals triumph. The two-time SKUSA Pro Tour champion and current EKN TaG Driver Rankings Powered by Bell Racing USA #1 driver came just four points short of winning the title this year, so he remains at the very top of his game. With his thoughts now turning to an effort to advance to cars and his Mazda Road to Indy $200,000 Scholarship Shootout ticket in hand, this could be the last SuperNationals for Craig as a full-time karter. As such, there is no doubt that he would like to end his karting career with a second straight victory in Vegas.

The field chasing Craig is not only large, but extremely talented. Nearly 70% of the drivers entered did not race in the category a year ago, however, there are some high finishers returning, including Canadian Zachary Claman DeMelo. The MRTI Indy Lights race winner who made his first IndyCar start this past season drove to second in last year’s main event on SuperSunday. The Quebec driver was racing DD2 at the RMCGF in Portugal this past weekend, and he’s making the trek to Vegas for a repeat of a podium finish aboard his Intrepid machine. Behind him last year was Aussie Joshua Car, who made his SuperNats X30 Senior debut in 2016. The 17-year-old is back on the CompKart chassis. Fourth was veteran and former winner Andre Nicastro (NF / Kosmic). The 2010 victor earned his best finish since that epic triumph and now at 36-years-of-age, the Brazilian is vying for a return to the top step of the podium. Fifth a year ago was former winner Marco Maestranzi, who is not competing at this year’s SuperNationals.

The driver who beat out Craig for the title this season is two-time defending SKUSA Pro Tour champion Ryan Norberg. The Florida driver has four wins over the two seasons, and claimed this year’s title with PSL / Birel ART. In October, Norberg represented SKUSA and the United States at the IAME International Final, placing third in a ridiculously competitive international field. Last year’s eight place finish was completed with a focus on winning the title, as he made sure to gain enough points for the championship. This year, Norberg is sure to lay it all out on the table. 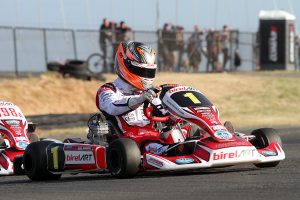 The same can be said for Brandon Jarsocrak (KSNA / Praga). The third-place overall finisher in this year’s SKUSA Pro Tour championship chase finished with four podium results, including a victory in the final round. Now that his initial SKUSA victory is off his back, the USPKS champion is ready to battle again for the top spot on SuperSunday, after finishing a disappointing 11th last year after starting on the pole position.

While we typically see a world champion competing in the KZ category at the SuperNationals, this will be the second time one has raced in the X30 Senior division. 2017 CIK-FIA World Karting Champion Danny Keirle is set to make a return to the SuperNationals. The 20-year-old driver added his name to the historic list, becoming the sixth British pilot to earn the world championship crown. Keirle drove for former world champ Terry Fullerton last year, and now is set to make the international debut for Kart Republic, the new operation and chassis brand under the direction of Dino Chiesa. Also under the KR tent will be USA driver Nicholas d’Orlando, making his debut with the world championship operation. For d’Orlando, this is also his debut in the Senior division after placing third a year ago in Junior.

One of the unique aspects of the ‘TaG’ Senior category at the SuperNationals is that there has never been a driver who has been able to win the class a second time. Craig and Nicastro are the only two of the 96 entered who have a chance to claim the fame, while the others are all vying to be the 15th different winner since Chris Freckleton scored the win in 2003. No one has wanted it more over the last decade than Aussie David Sera. The multi-time Australian national champion has seen the glory of victory on SuperSunday slip from his hands on numerous occasions. An epic finish in 2011 that many thought should have gone to Sera was not to be, as Nicastro claimed the title in the closest ever SuperNationals finish. In 2013, Sera was again the second runner-up, this time to fellow countryman Nicholas Rowe. A third-place the next year, in 2014, was his last trip to the podium. With a new design, and a new name on the chassis branded after him, Sera will return to grace the paddock with good vibes, and amazing racecraft. 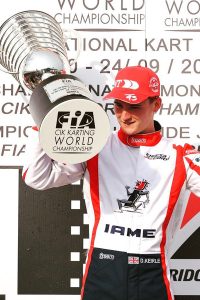 Looking down the entry list, there are so many names you can mention to be in contention this week, especially with 96 different drivers representing 16 countries. Some of the top drivers from the USA include two-time SKUSA Pro Tour winner Braden Eves, ready to give VemmeKart its first triumph at the SuperNationals for the brand managed by former race winner Lorenzo Mandarino. AJ Myers is making his first start in the X30 Senior division after finishing runner-up in S1 last year. The former KZ podium finisher has taken the TB Kart brand to the next level in the USA, and is vying to bring its single-speed chassis – the AJ5 – a podium at the SuperNationals.

Alex Bertagnoli is the top rookie in 2017 per the EKN TaG Driver Rankings. The Franklin Motorsports / Merlin driver made his SuperNats debut two years ago, landing on the podium in Junior before returning to the steps to claim the SKUSA Pro Tour title. After a rough start to the year, Bertagnoli was able to win at the USPKS program, finishing second to Jarsocrak in the title chase, and earn solid finishes to close out the year at SKUSA. Dante Yu is looking to finish the season as the top rookie on the year. Yu (J3 / CompKart) has been improving with each outing, and impressed at the IAME International Final with his speed, only to be taken out in the heat races. A victory at the Streets of Lancaster Grand Prix at the end of September shows the Californian loves the temp courses. 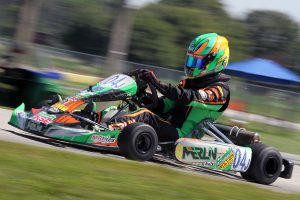 Can Bertagnoli earn SuperNats hardware for a third straight year, this time as a Senior rookie? (Photo: EKN)

A Canadian has won this class twice: Daniel Morad in 2006 and Phillip Orcic in 2011. Last year could have been the third victory for our friends north of the border, but I think this is a stronger year of talent. In addition to Claman DeMelo, you have Ryan MacDermid (Tony Kart) and Kellen Ritter (RPG / Kosmic), who both raced in Portugal at the RMCGF before travelling to Vegas. The Lupien brothers from Quebec – Cedrik and Samuel – have been among the top contenders throughout the SKUSA Pro Tour and should be in Vegas as well under the Rolison Performance Group tent. Fellow RPG driver Matthew Taskinen is another driver making his SuperNats debut in the Senior category, looking to bring the victory back home to Canada.

There are also drivers who are coming back to their roots, namely those racing in the Mazda Road to Indy program. Current Indy Lights star Neil Alberico (Tony Kart) is returning to the SuperNats and going to sport a unique graphic kit for the week. Former SKUSA Pro Tour champion David Malukas is roughly just one year removed from the sport, having entered the USF2000 this past season. Also in the USF2000 ranks is Florida driver Darren Keane (Tony Kart), who will be making a return to the SuperNationals.

All told, with potentially the largest field of X30 Senior drivers every assembled in the United States, this year’s main event could be the most exciting ever.