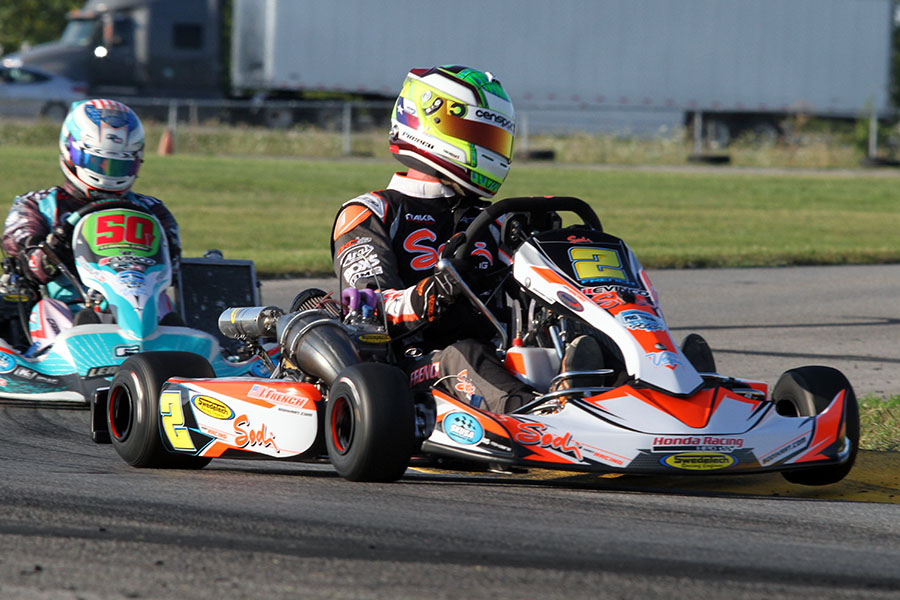 The 2017 Superkarts! USA Pro Tour took its penultimate step towards completion at New Castle Motorsports Park and the quality of the racing was in keeping with the level of the competition.  Over 255 drivers have packed the paddock, including 57 drivers in the X30 Senior class alone, and the fights for the wins in many of the classes came down to drag races to the line after green-to-checker dogfights.  Dallas Karting Complex lead driver Jake French, swapping the lead before French edged Carlton at the line following a strong exit out of the final hairpin.  Similarly, the X30 Senior class was engaged in an epic scrap for the win, one that saw Braden Eves emerge with a photo finish victory after coming on strong over the final laps. 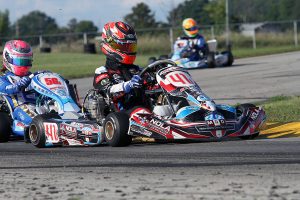 The S1 Pro Stock Honda main event wrapped up the long day of Round Five with the 11 Pros taking on the 1-mile circuit for the 25-lap battle. Top qualifier and Prefinal winner Jake French (DKC / Sodi Kart) broke away from the field with shifterkart legend Gary Carlton (LEM / Formula K) hot on this tracks. Carlton was able to close in and make it a two driver battle as the rest of the field battled with each other, and attrition. Defending SKUSA Pro Tour champion Daniel Formal (Champion / Intrepid) and WinterNationals winner Hunter Pickett (Aluminos) fell victim, as did third place runner Mathias Ramirez (Andersen / Birel ART). GFC struck on lap 18, and the two began to size up each other. It came down to the final lap with Carlton leading as they made their way through the final corner. French pulled the slingshot move, using as much racetrack on the inside of the final straight as possible. At the line, French earned his second SKUSA Pro Tour victory on the season by two hundredths of a second. Carlton settled for his second runner-up finish of the season. With the attrition, the battle for third went down to the wire with an impressive performance put in by Kyle Kalish. The Franklin Motorsports / Merlin driver continued to improve throughout the day, and raced his way to the podium finish after not racing since the SuperNationals. Nic LeDuc (Cambrian / Sodi Kart) drove to fourth with Billy Musgrave (MRC / Aluminos) in fifth. 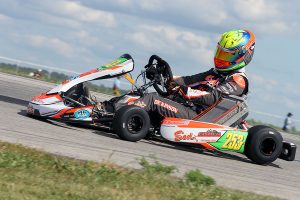 Riley Dickinson swept the day in S2 for his third victory of 2017 (Photo: EKN)

A record number of 57 drivers took to the New Castle circuit in the X30 Senior division. Former Junior SKUSA Pro Tour champion Brandon Lemke (Top Kart) set fast time in qualifying while last year’s S1 double winner AJ Myers (TB Kart) came away with the Prefinal win. Myers set the pace for the first half of the race while Lemke was shuffled back. Eventually, the four different winners on the SKUSA Pro Tour took over the top four positions – Jake Craig (RPM / Tony Kart), Zach Holden (Energy), defending champion Ryan Norberg (PSL / Birel ART) and Braden Eves (MDD / Vemme). Eves fight to the front was a long war, getting shuffled back to 36th in the Prefinal and clawing back to 17th by the end. The SpringNationals winner advanced into the top-10 quickly and joined the lead group late. Craig led as the white flag wave and led for much of the lap. Eves worked himself into the second spot, and put the pressure on. Craig ran the defensive line into the I-70 corner, with Eves electing to go the outside lane. It gave him enough momentum to slingshot past Craig down the final run to the checkered flag, reaching the stripe first for his second straight SKUSA Pro Tour victory. Holden came across the line second, however, was underweight at the scales. It would have promoted Craig to the runner-up spot, however, he was given a three-position penalty for avoidable contact. That gave Norberg the second spot with Senior rookie and 2016 Junior champion Alex Bertagnoli (Franklin / Merlin) the third spot. Marjin Kremers (PSL / Birel ART) was classified fourth with Craig put back to fifth ahead of Canadian Samuel Lupien (RPG / Kosmic). Sonny Cervelli (RPM / Tony Kart) was the big mover in the race, making up a large amount of positions until contact took him out, giving 2015 double SummerNationals winner Jesus Rios Jr. (iKart) the hard charger award for moving up 40 spots in 25 laps to 13th. 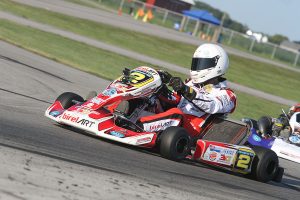 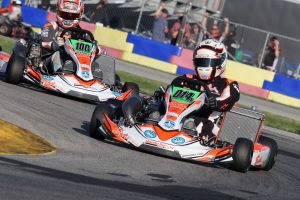 Another sweep on the day came from Laurentiu Mardan (KartCraft / Tony Kart) in the X30 Master division. Mardan set fast time in qualifying and came away with the Prefinal win. A solid group of drivers stacked up behind Mardan in the Final, including championship contenders and last year’s title winner Derek Wang (BBR / FA Kart). Mardan fought him off to the checkered flag for his first SKUSA Pro Tour victory. Wang settled for second, scoring big in the title chase. Jonathan Silva (FW / CompKart) earned his first SKUSA Pro Tour podium with the third place finish ahead of championship leader Travis Irving (FW / CompKart), who bounced back from a broken coil wire on the final lap of the Prefinal. Florida driver Scott Roberts (SCR / Tony Kart) completed the top-five. 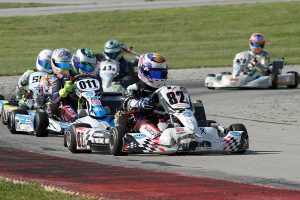 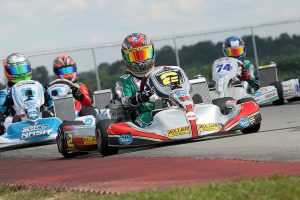 In 2016, Dylan Tavella made his SKUSA Pro Tour debut at the SummerNationals, winning both main events and eventually earning the SKUSA #2 plate for 2017. Tavella (IRM / Tony Kart) made it three straight in SKUSA competition at New Castle with victory today. Tavella set fast time in qualifying and but lost the Prefinal battle to last year’s Cadet champion Tyler Maxson (SRC / Tony Kart). The two were joined at the front by Trey Brown (Nash / FA Kart) and Jak Crawford (Nash / FA Kart). Crawford however retired with three laps remaining, and at the same time, Tavella established himself as the leader. The championship leader drove away to the victory, his third of the season, essentially locking up the title. Maxson drove to second with Matias Zagazeta (BBR / Tony Kart) in third. Caleb Bacon (Tony Kart) recorded the fast lap of the race, placing fourth with Brown pushed back to fifth. 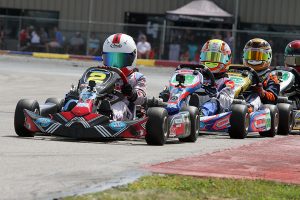 A 47-kart Mini Swift field battle all day long. The high level of competition showed with the long lines of draft packs, including the lead groups. Veteran Cadet driver and last year double winner Reece Gold (Benik) set the pace, posting fast time in qualifying and emerging with the Prefinal win. He was joined in the final by SKUSA #2 plate holder Diego LaRoque (PDB), double SpringNationals winner Carson Morgan (Benik) and John Burke (Energy). All but Burke took a turn at the point with LaRoque coming away with the victory, edging out Gold at the line by 69 thousandths of a second. Morgan completed the podium with a solid effort put in by Burke in fourth. Alex Powell (Energy) placed fifth. 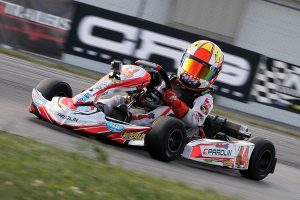 The first major victory is always a lasting memory. For Caleb Gafrarar, the Saturday in New Castle will be it. The Russell Karting Specialties / Parolin driver was able to use smart race craft to put himself first to the checkered flag in the Micro Swift. After qualifying 10th, Gafrarar worked up to third in the Prefinal to put himself in position to fight for the main event victory. A five-driver lead pack formed during the race, including Gafrarar with early leader Christian Miles (Formula K), Frankie Iadevaia (Nitro Kart), SKUSA #2 Brandon Carr (Benik) and SKUSA #3 Elliot Cox (Energy). Miles, Cox and Gafrarar led until Carr put himself into the lead. They continued to shuffle for position with Gafrarar putting himself into second behind Cox. The two drag raced to the checkered with Gafrarar able to reach the inside line first, crossing the line for the victory ahead by seven hundredths of a second over Cox. Iadevaia completed the podium over Carr. Miles was handed a 14 position penalty, thus promoting Miguel Costa (Benik) the fifth spot.