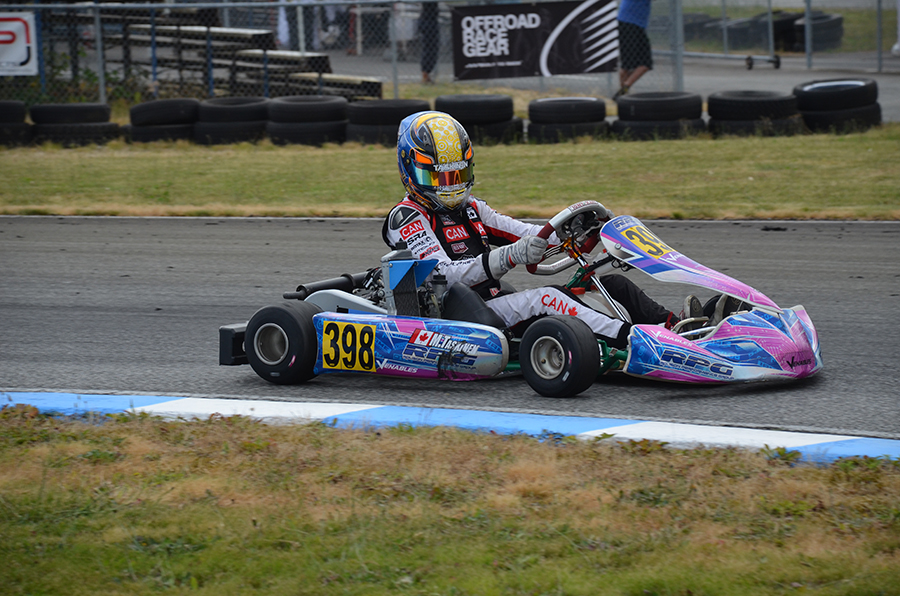 After kicking off their 2017 schedule at the Horn Rapids Kart Track in Richland, WA back in early June, the Can-Am Karting Challenge is back in action this weekend north of the border at Greg Moore Raceway in Chilliwack, BC. The day started with a wet track, as overnight rain set the conditions for qualifying, but the pavement was dry by the time the Senior Max karts hit the track, which made for an exciting session. The Prefinal and Finals were all run in the dry, and Matthew Taskinen (Senior Max), Kyle Wick (Shifter) and Hannah Greenemeier (Junior Max) were the big winners.

Senior Max qualifying was made exciting by a drying track that sent the mechanics scrambling for slicks just after the eight-minute session went green. A number of drivers took to the track using the wet weather treaded tires, but it was quickly apparent that the drys were the way to go. Kyle Wick (CRG) was the first to the track on the slicks, and he was able to get more laps to build heat into his tires, and this paid off with the pole position as the other scrambled to gain open track. Matthew Taskinen (Kosmic) was second on the time sheets, ahead of Tyler Dueck (Atomica), Kellen Ritter (Kosmic), and Kyle Dupell (FA). The opening lap of the Prefinal was hectic to say the least, as Taskinen took the early lead ahead of Wick. Kyle would drop back to fifth early in the race, as Ritter slotted into second. A six-kart train developed early and would eventually expand to eight drivers by the halfway point. After some late-race action, Taskinen maintained his gap for the win, ahead of Ritter and Dupell. Jacob Gulick (Kosmic) and Wick rounded out the top-five. In the main, Taskinen bolted early and would not be challenged enroute to a 3.001-second triumph. Ritter advanced early to grab hold of second, while Gulick completed the podium in third. Dupell and point leader Mason Buck (Tony Kart) wrapped the top-five. Taskinen’s win certainly tightened the championship, as he was fifth coming into the day. 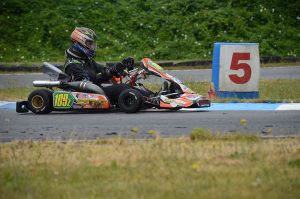 Wick (CRG) was doing double-duty on the day and he set the pace during the wet qualifying session for the Shifter class, and then he went on to lead the Prefinal from start-to-finish over Zach Pettinicchi (Tony Kart), who advanced quickly from fifth. Matthew Morgan (CRG) qualified P3 and held that spot through to the checker. Conner Wick (FA) was hurt by some start-line confusion by the officials for the Prefinal, pushing him back out of his P4 grid spot, but he moved by to his position before the start and recovered after losing a spot on the green to get past off-polesitter Cole Franchini (CRG) to finish fourth. Pettinicchi got the holeshot in the 20-lap main and he was able to hold Wick at bay for a couple of laps before ceding the position. Wick would drop the hammer from there to pull away to a 9.097-second win over Pettinicchi. Connor Wick (FA) emerged from a good battle with Franchini to score the final spot on the podium. 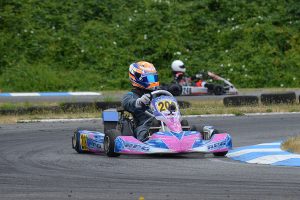 Hannah Greenemeier (Kosmic) was the class of the Junior Max field, topping all three sessions. In the Final, Greenemeier checked out for the win, showing that she’s become one of the best Junior drivers in the country. Marco Kacic (Tony Kart) had to come from last after a mechanical issue in Prefinal, and he was on fire, continually lowering the fast lap of the race through latter half of first 10 laps. He eventually caught Jason Leung (Gillard) and then began an entertaining battle through to the end of the race. Kacic would eventually take over the position to finish second, while Leung was third. Kyle Francis (Tony Kart) and Townes Allen (Tony Kart) rounded out the top-five.

In the Masters Max main, Chris Eagles (Atomica) got great start to lead early, chased all the way go the checkered flag by Chris Mann (Birel). Nik Goodfellow (Kosmic) topped both wet qualifying and the Prefinal, but slipped to third in the final, taking the third step on the podium. Erik Gerlof (Tony Kart) and Michael Groff (Kosmic) completed the top-five. In TaG Senior, Zach Pettinicchi (Tony Kart) won over Peter Chung (Maddox) 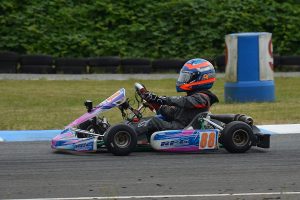 In GoKart Hero Micro Swift, Antonio Constantino put his Atomica on the pole in qualifying, showing impressive speed in the wet. Graham Trammell (Kosmic) was second, but he quickly went to the lead in the dry Prefinal, setting up an awesome back and forth scrap between he and Constantino. On the final lap, Constantino was able to get back by to take the win and maintain his pole position for the final. The main event was all Trammell, however, as the Rolison Performance Group driver jetted away early to lead by over three seconds by the quarter-distance mark. Constantino finished second, while Ryland Eagles (Atomica) capped the podium. 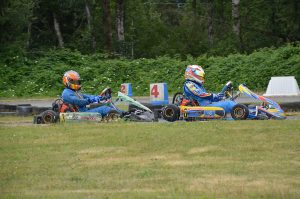 Brady Egger (left) and Derek Wang (right) waited until the final lap of the LO206 main event to face off for the win, which Egger picked up after a technical DQ
(Photo: Dalton Egger)

Colby Wallace (Birel) set the pace during the wet LO206 Senior qualifying run ahead of Tommy Gritzmacher (FA) and Vitali Tchikichev (FA). Brady Egger (Tony Kart) and Derek Wang (FA) capped the fast five. Opening lap chaos in the 10-lap Prefinal left Wang in the lead, and he slowly pulled away to win by over two seconds. Egger held second for a majority of the race but dropped back to third behind Tchikichev to secure the inside of the second row for the final. The Wang-Egger duo would quickly go to the front in the main event, hooking up to pull away and fight it out amongst themselves. Behind them, Vitali Tchikichev (FA) and Spencer Kunz (Kosmic) settled into a fight for the final position on the podium. Egger sat glued to Wang’s rear bumper for the full race, and then made his bid for the win on the final lap, going side-by-side through the final corners. Wang was able to drag-race him to the line for the on-track win, but was DQ’d after losing his air filter. This promoted Egger to the win, and Tchikichev and Kunz to the podium.

The 206 Junior Prefinal featured a great battle between Josh Pierson (Tony Kart) and Carson Kunz (Kosmic). After Pierson led early, Kunz passed him in turn three and led the for the middle laps of the race before Pierson slipped back by with two to go. Kunz pushed him to the finish, but had to settle for second. There was an awesome fight for P3 as well between Zach Franzke (Kosmic) and Cooper Becklin (Birel ART) that saw Franzke take the spot. In the final, Pierson jetted away early and then managed the lead as Kunz and Franzke raced hard to try to reel him in. It was not to be, with Pierson taking a 2+ second win while Kunz paced Franzke to the line. Becklin finished fourth while Daytona Arnzen (Exprit) rebounded from a turn one, opening lap spin to advance back to firth.

Graham Trammell (Kosmic) and Trey Arnzen (Exprit) battle for 16 laps in the LO206 Cadet finale, swapping the lead on several occasions. As the race closed on its finish, Trammell retook the lead to start penultimate lap, but Arnzen repassed for the point on final lap in turn eight with a great move to the inside. He was able to hold off Trammell’s continued attack to win by just 0.274 seconds at the checkered flag. Preston Franzke (Kosmic) finished third.