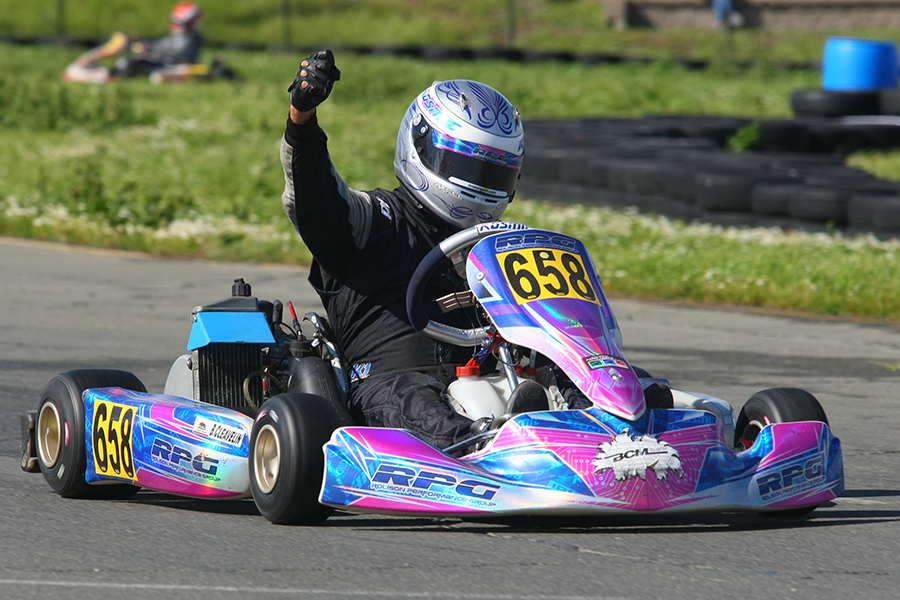 Excitement and controversy seems to follow the Challenge of the Americas each and every time the program visits the Simraceway Performance Karting Center in Somoma, California. The 10th anniversary season is completing this weekend in ‘wine country’ with Round Five and Six contested on the popular circuit in Northern California. Wet weather tested the competitors throughout the day, with rain falling during qualifying and the lunch break, making the track damp enough for wet weather tires. By the time the main events rolled around, it was about taking the gamble of rain tires or dry slicks to for the first categories in the order before the track finally dried out for the last two races on the day. The first championship was clinched for the 2017 program with the fifth straight victory in Masters Rotax for Billy Cleavelin, earning a second straight trip to the Rotax Grand Finals. Controversy surrounded the final classification of the Senior Rotax category while local knowledge prevailed in Junior Rotax for Bryson Lew.

Saturday afternoon provided the first championship decided for the 2017 Challenge program following the fifth victory for veteran karter Billy Cleavelin in the Cambrian Go-Karts Masters Rotax. The RPG / Kosmic driver prevailed in the main event after chasing David Pergande all day. The Texan out of the Full Throttle Karting tent set fast time in qualifying (1:04.065) by over one-second and drove away to victory in the Prefinal – both under wet weather conditions. The main event put most of the drivers on dry MaxOne tires for the first time on the day, with Pergande and Cleavelin pulling away early. Pergande continued to lead until lap nine. From there, the four-time race winner pulled away little by little to a seven-second advantage. Pergande continued to slip further back, and was demoted by local driver Ron Jenkins (Cambrian / Birel ART) for the second position. Chad Wallace (BBR / Birel ART) had the pace to run with the leaders, posting multiple fast laps but multiple spins cost him from battle for the lead or reaching the podium, placing fourth. Roman Alekseenkov (Tony Kart) completed the top-five. 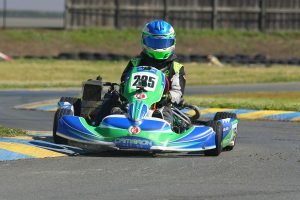 The early gamble did not pay off for many in the Rolison Performance Group Junior Rotax division, and allowed local driver Bryson Lew to take the victory. Hannah Greenemeier (RPG / Kosmic) was the rain master – posting a fast lap in qualifying by 1.3 seconds and pulled out to a similar margin in the Prefinal win. She along with a number of the top contenders elected to put on the new Mojo tires for the main event, with just six of the 19 drivers keeping the wet Mojo compound on for the main event. An interesting two warm-up laps saw Greenemeier spin along with championship contender Jak Crawford (Nash / FA Kart) – the field took the green flag. It was Cooper Becklin (Birel ART) and local driver Lew (Cameron / Tony Kart) out front with Greenemeier slipping back on the slick tires. Lew took over the lead on lap two, and never looked back. Lew drove away to a large margin, recording his first Challenge victory by 17 seconds. Becklin ran second for the remainder of the race, until he was removed from the results for a tech infraction. That put Brennan Stammer to second, giving Cameron a 1-2 finish. Jenson Altzman (Ruthless / Tony Kart) completed the podium, running on wet Mojo compound. Trey Brown (Nash / FA Kart) was the top slick Mojo finisher, placing fourth and earning the fast lap bonus. Greenemeier held on to finish fifth, one lap down to Lew. Turn four was a parking lot, with a number of karts stalled and stuck in the mud throughout the 25-lap event, including point lead Crawford to make for an interesting final day in the championship chase.

It would not be a race at Sonoma without a little bit of controversy. The championship in the Nash Motorsportz Senior Rotax division has gone down to the wire many times before. Saturday’s results would make a big impact on just who would be left in contention heading into the final round Sunday. Jacob Gulick (RPG / Kosmic) stole the show in qualifying, taking the five bonus points from the four drivers in title contention as he mastered the wet track in a time of 1:01.779. Point leader Christian Brooks (Nash / FA Kart) was second, and came away with the win on a semi-wet course during the Prefinal. The sun was out for the Final, and it was the first session drivers took to the dry MaxOne tires. Bryce Choquer (BBR / PDB) and Derek Wang (BBR / FA Kart) were quick in the opening laps, jumping out ahead of Brooks. Wang only made it to lap eight before popping a chain, leaving Brooks as the only challenger for Choquer. Little by little, Brooks cut into the big advantage the Canadian built in the opening laps. 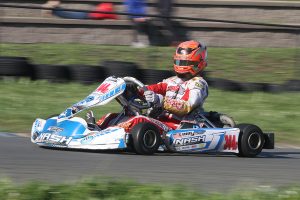 The win in Senior Rotax was awarded to Christian Brooks (Photo: EKN)

It came down to the final circuit, with Brooks right on the bumper of Choquer. He made his move going into turn eight down at the helipad section. They went side-by-side into tic-tac-toe. Choquer elected to miss the ‘tac’ portion of the track, taking a straight route to the ‘tic’ corner number 11. That put him out front, and crossing the line first. Officials did not make the call for cutting the track, thus a protest and appeal were presented by the Brooks camp. After much deliberation, Choquer was assessed a 10-second penalty for cutting the track. Brooks was awarded the win, dropping Choquer to third and moving Gulick – who had fast lap of the race, into second. Kellen Ritter (RPG / Kosmic) was fourth with Kyle Dupell (BBR / FA Kart) in fifth.

Two Wallace Steel / BBR Karting Shifter Senior drivers took to the track on Saturday, with Kyle Loh (Cameron / Aluminos) coming away with the victory. Zach Pettinicchi (Tony Kart) was the quickest of the two, however, spins in both the Prefinal and Final kept him from leading the way and allowed Loh to take the checkered flag in both sessions.

Austin Torgerson (Tony Kart) was the top driver in the AMP Racing / M2 Image Solutions Briggs 206 category in the wet, leading the qualifying session before going on to win the opening heat handily. The second heat race was the first on dry tires, bringing out the rest of the field who elected to sit out the first two sessions. That included Joey Wimsett. He joined Derek Wang (FA Kart) and Griffin Dowler (Tony Kart) in a 10 lap battle at the front. Wimsett came out with the win, only to be given a three second penalty for a start infraction. That handed the win to Wang and moved Dowler to second, dropping Wimsett to third. Bryce Choquer (PDB) ran fourth with Torgerson back in fifth. 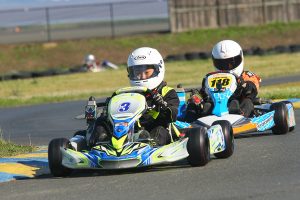 Ashton Torgerson dominated the day in the Brash Racing Mini Max division, only to come up short in weight for the main event. The PDB driver lapped the entire race group (Mini and Micro), but came across the scales underweight and thus received a DQ. That gave point leader Jack Armstrong (Benik) the victory with Tuesday Calderwood (Benik) in second.

Tyson Quach (CompKart) came away with his first Challenge victory in the Podium Karting Micro Max category. Quach ran second in the wet sessions of qualifying and the Prefinal to point leader Sebastian Mulder (Benik). Making the switch over to dry Mojo tires, Quach took advantage of a slipup by Mulder early, leading the entire Final to earn the victory. Mulder fought back to second to help his championship chances. Patrick Molnar (Birel ART) drove to third, but was given a starting penalty and moved to fourth, putting Parker DeLong (Benik) on the podium. Miles Hewitt (CompKart) rounded out the top-five.