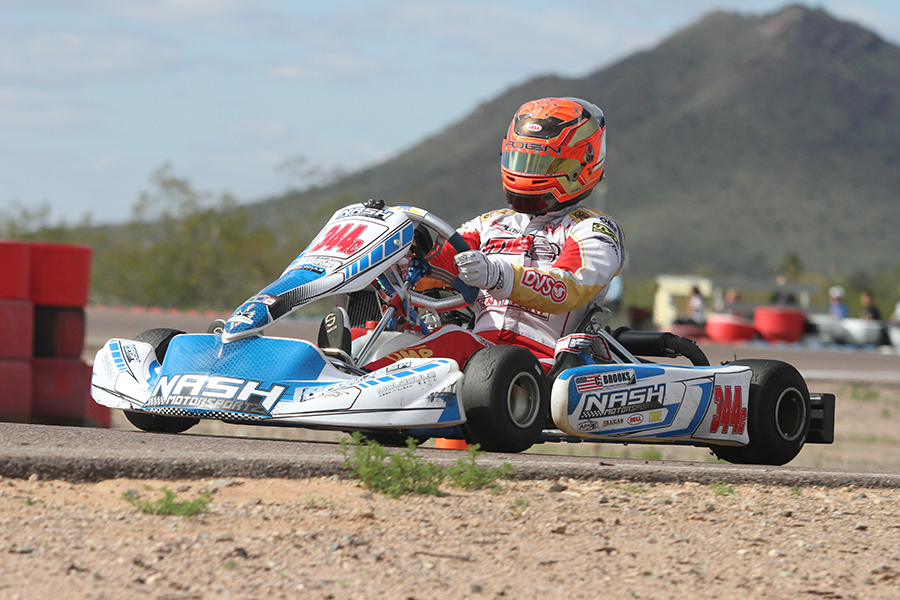 Another beautiful day in Glendale, Arizona for the final day of action for the Challenge of the Americas at the Phoenix Kart Racing Association. Sunday was the fourth round of the championship program and the final day of racing for the second stop of the premier west coast winter series. After a brief scare of clouds early on during the day, the skies opened up with sunshine for the seven categories to finish the weekend in perfect racing conditions.

Four rounds of racing in the books, and we have seen four different winners in the Nash Motorsportz Senior Rotax division. 2016 champion Christian Brooks completed a sweep of Round Four, earning his first victory of the 2017 season. Brooks (Nash Motorsportz / FA Kart) set fast time in the qualifying, edging out Saturday winner Bryce Choquer (BBR / PDB). Brooks was able to get away from the field at the start of the Prefinal while Choquer drifted back to seventh in the 17-lap run, allowing Round One winner Kellen Ritter the opportunity to take over the second spot with Max Hewitt (CompKart) into third. No one was able to match the pace set by Brooks in the 25-lap final, as the GRC Lites driver went on to victory. After an early fight, Ritter settled in to the second position while Noel Dowler (Apollo / Tony Kart) worked up to the third step of the podium, his first on the year. Matthew Taskinen (RPG / Kosmic) worked past Hewitt to finish fourth. 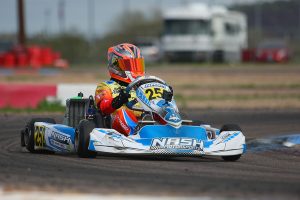 Jak Crawford went unchallenged throughout the day, completed a sweep on Round Four and double up in the win column for the weekend in Rolison Performance Group Junior Rotax. Crawford set fast time in qualifying before pulling away to a 3.6-second gap in the Prefinal. The Nash Motorsportz / FA Kart driver went on to lead all 25 laps of the Final with fast laps of the race to a near five-second advantage for the victory. Hannah Greenemeier (RPG / Kosmic) put herself into the second spot early, out-running Trey Brown (Nash / FA Kart). Griffin Dowler (Apollo / Tony Kart) was a close fourth while Cash Tiner (RPG / Tony Kart) earned a third top-five finish.

It was a similar performance for Billy Cleavelin in the Cambrian Go-Karts Masters Rotax division, going untouched all weekend long. Cleavelin competed another sweep on Sunday, leading from qualifying into the Prefinal and every lap of the Final for a fourth straight victory, nearly locking in his ticket to the Rotax Grand Finals with the class championship. David Pergande (FTK / Tony Kart) drove a solid second with Ed Quinn (FTK / Birel ART) celebrating his birthday by earning his first Challenge podium in third. Chad Wallace (BBR / Birel ART) worked his back up to fourth after a spin, working past Bill Kann (SCR / Ricciardo). 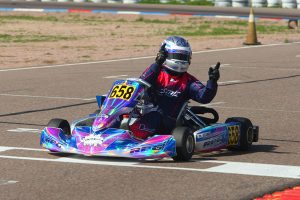 The Brash Racing Mini Max division was a battle of two drivers – 2016 Rotax Grand Finals Micro Max champion Diego LaRoque (BBR / PDB) and Ashton Torgerson (BBR / PDB). LaRoque struck first by edging out Torgerson for fast time in qualifying and was able to reach the checkered flag first in the Prefinal after a heated 13 laps. The Final began with LaRoque leading until Torgerson took over the spot on lap four. From there, Torgerson drove away with fast laps of the race to earn his second victory on the weekend. LaRoque settled for second, retaining the championship lead heading into the series finale. Tommy Traylor (Birel ART) crossed the line in third, but was handed a two position penalty for contact, giving Tuesday Calderwood (Tony Kart) her first Challenge podium. The penalty put AJ Hernandez (KGB) into the fourth spot as Traylor was classified fifth.

It was a great fight all day in the Podium Karting Micro Max class with Parker DeLong coming away with the victory. DeLong (Benik) set fast time in qualifying to edge out Brock Boyse (Benik) by just 62 thousandths of a second. After leading the first nine laps, DeLong was shuffled back to third on the final circuit with Boyse taking the win and Sebastian Mulder (Benik) following through. Boyse was able to hold on to the top spot throughout the 14-lap Final, scoring the victory just ahead of Mulder. Tyson Quach (CompKart) worked up to third to celebrate at the podium ceremonies, with DeLong dropping to fourth. Patrick Molnar (Birel ART) completed the top-five. 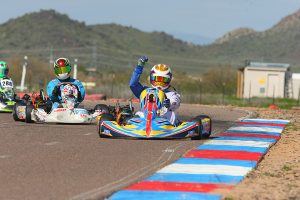 The M2 Image Solutions Briggs 206 Senior was won by Derek Wang. Trouble throughout the heat races put the FA Kart driver back to seventh on the grid. With a solid start he was into the lead group that featured five different leaders. Wang was the final driver to take over the top position, reaching the spot on lap 16 and going on to reach the checkered flag first, earning the $500 payday. Noel Dowler (Tony Kart) ran second, earning a free entry to the next weekend with Austin Torgerson (Tony Kart) completing the podium, and taking home a set of MaxOne Tires. Ben Maxfield (FA Kart) improved to fourth with Griffin Dowler (Tony Kart) rounding out the top-five. The APM Racing Briggs 206 Junior class was separated from the Senior class for the last main event of the day. A wild start separated the field until three drivers formed the lead group – Diego LaRoque (PDB), Logan Calderwood (Tony Kart) and Ashton Torgerson (Tony Kart). LaRoque dropped off after losing his chain with six laps to go, leaving the other two to fight for the win. Calderwood was leading on the final lap and running a defensive line. Torgerson tried an inside move at turn three, but contact was made and Calderwood spun around. Torgerson went on to cross the line first with Calderwood able to continue to finish behind him. Officials penalized Torgerson for the contact, giving Calderwood the victory and a free entry to the Sonoma weekend, with Ashton classified second. Timmy Trostel III (Tony Kart) crossed the line third, however, was penalized for contact at the start, thus giving the final step of the podium to Oliver Wilson-O’Reilly (Ricciardo).

The third and final stop for the 2017 Challenge of the Americas is set for the Simraceway Performance Karting Center in Sonoma, California on April 7-9.