Choquer, Cleavelin and Crawford help out championship hopes with victories 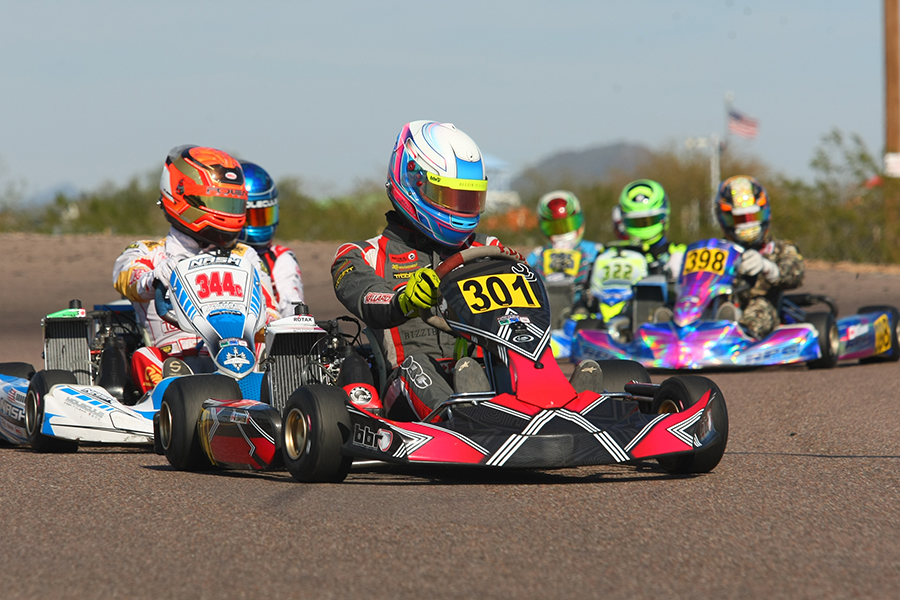 Bryce Choquer remains the driver to beat in the championship chase with his first victory in 2017 (Photo: SeanBuur.com)

The first half of the 2017 Challenge of the Americas went into the books following the Round Three action at the Phoenix Kart Racing Association facility in Glendale, Arizona. Bright sunshine throughout the day welcomed the seven categories competing over the weekend at the 3/4-mile circuit following a crisp, cool start. The three headline categories – with 2017 Rotax Grand Finals tickets on the line – signified the top players for the championship and the trip to Portimao, Portugal for the world Rotax championship.

Bryce Choquer left the Tucson weekend as the Nash Motorsportz Senior Rotax championship leader, and remained the driver to beat with a sweep on Saturday. Choquer (BBR / PDB) posted a 45.556-second lap to edge out the 13 driver field. Last year’s champion Christian Brooks (Nash Motorsportz / FA Kart) was the top challenger, slotting in behind Choquer from outside row one for the Prefinal. Brooks led just one lap only to see Choquer take the race win. The main event saw Choquer lead all 25 circuits, trailed by Brooks with Canadians Kellen Ritter (RPG / Kosmic) and Matthew Taskinen (RPG / Kosmic) trailing, along with Max Hewitt (CompKart). No positions changed throughout the race, with Choquer getting away to a 1.1-second advantage. Ritter put late pressure on Brooks, unable to steal the second spot. Round Two winner Taskinen held to third with Hewitt losing the draft, placing fifth. 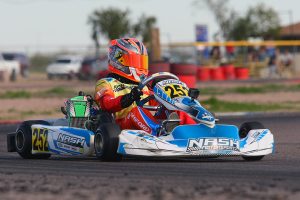 The new leader in the Rolison Performance Group Junior Rotax championship chase is Jak Crawford following his sweep on Saturday. Crawford paced the 19-driver field throughout the day to earn a perfect score, jumping over Hannah Greenemeier for the point standings lead. Crawford nearly broke the 46-second mark in qualifying with a 47.082-second lap. The 17-lap Prefinal was all Crawford, with wire-to-wire win with Nash Motorsportz teammate Trey Brown coming from fourth to second over Canadian Griffin Dowler (Apollo / Tony Kart) and Greenemeier (RPG / Kosmic). The three stayed with Crawford in the opening laps of the main event until they shuffled for position. Lap after lap, Crawford pulled away with fast laps of the race for his first COTA Junior victory. Brown won the battle for the runner-up position in his first start with the series since Tucson of last year. Dowler completed the podium with Greenemeier placing fourth. Cash Tiner (RPG / Tony Kart) earned his second top-five finish in three starts. 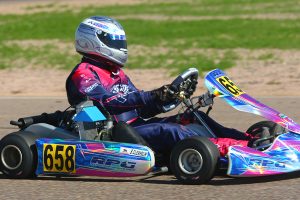 Billy Cleavelin is 3-for-3 in Masters Rotax at the Challenge (Photo: SeanBuur.com)

It was a solid return to the Challenge for 2016 Micro Max champion Ashton Torgerson, sweeping the day in the Brash Racing Mini Max category for his first win in the class. Torgerson broke the perfect streak that point lead Diego LaRoque carried into Phoenix, beating the two-time winner in qualifying. It was setting up for a great battle in the Prefinal when LaRoque was pulled off for a loose rear bumper. That gave Torgerson a clear run to the race win. LaRoque had to come from ninth on the grid in the main event, working his way up to second, unable to reel in Torgerson. Ashton scored the win by over three seconds with BBR / PDB taking the top two positions. A.J. Hernandez (Ruthless / KGB) was leading the battle for third until officials pulled him off for what appeared to be an unstrapped helmet. That promoted Tyler Ruth (Ruthless / KGB) to the third step of the podium with Tuesday Calderwood (Tony Kart) and Jack Armstrong (Podium / Tony Kart) rounding out the top-five. 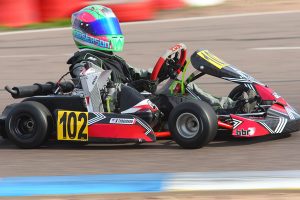 It was an busy day of action in the Podium Karting Micro Max division. Brock Boyse (Benik) set fast time in qualifying while Parker DeLong (Benik) took the win in the Prefinal. The two went back and forth throughout the 14-lap main event, with Boyse able to secure the position at the checkered flag. Officials handed Boyse a three-second penalty for jumping the start, thus handing the win to DeLong. Boyse was put back to second until a tech infraction for float height removed him from the results. That put Noah Warren (Tony Kart) on the podium in second and Patrick Molnar (Birel ART) to third for his first ever podium finish. Tyson Quach (CompKart) and Graysen Andrews (Tony Kart) completed the podium.

It was a day of heat races for the APM Racing Briggs 206 categories. Derek Wang (FA Kart) set fast time in qualifying, only to see Blake Choquer (PDB) edge him for the win in Heat #1. Wang was stranded on the grid before the green flag waved for Heat #2, allowing for Noel Dowler (FA Kart) to earn the race win. Three different drivers led the Junior category throughout the day. Timmy Trostel III (Margay) was the quicker driver in qualifying with Diego LaRoque (PDB) and Ashton Torgerson (Tony Kart) each taking a heat race win. Tomorrow continues with the third heat and the main event.

Catch all the action throughout the day at the EKN Trackside Live page – www.ekartingnews.com/live