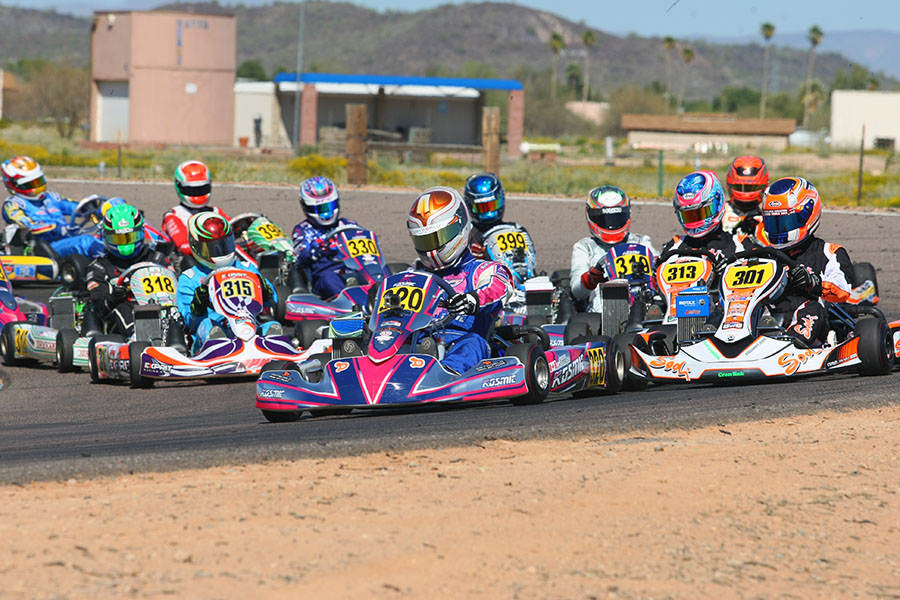 The month of February signals the annual trip for Challenge of the Americas program to visit the Phoenix Kart Racing Association in Glendale, Arizona. The premier winter series on the west coast travels to the Phoenix area this weekend to contest the third and fourth rounds of the championship chase. Racers in Rotax, Shifter, and Briggs categories will be competing all weekend long, with perfect weather conditions forecasted each of the three days.

PKRA has been a regular circuit for the Challenge, hosting the series for the ninth straight season. The 12-turn, 3/4-mile course provides fast corners, high g-loads and the long straightaway to stretch out the

Following the great weekend of racing in Tucson, Challenge of the Americas championship chases are underway with a number of potential contenders – including those in the headline categories fighting for a ticket to the 2017 Rotax Grand Finals in Portimao, Portugal. 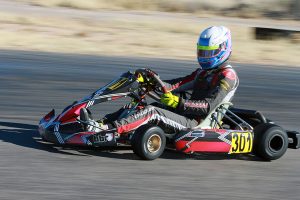 Many of the championships in the Nash Motorsportz Senior Rotax division have been decided in the closing laps of the series. Two different victors came out of Tucson with two different top qualifiers and two different Prefinal winners. Coming away with the championship chase lead was Canadian Bryce Choquer. The BBR / PDB pilot scored two runner-up finishes, along with fast time in Sunday’s qualifying session to establish a 14-point lead over 2016 champion Christian Brooks. The Red Bull Global RallyCross driver returned to defend his crown, and the Nash Motorsportz / FA Kart pilot was among the contenders all weekend, earning two third place results.

Sunday’s main event was a wild event, with Matthew Taskinen able to slip through for victory in his Senior debut weekend. The Rolison Performance Group / Kosmic pilot sits third in the championship chase, with teammate and fellow Senior rookie Jacob Gulick in fourth after two fourth-place results. CompKart driver Max Hewitt is fifth in the standings, ahead of Round One winner Kellen Ritter. The 2016 vice-champion scored the victory Saturday and was in contention Sunday until a flat tire took him out of contention. The DNF hurt his standings in the championship chase after two events, however, the event could be counted as his drop. Sitting seventh is Noel Dowler, the fourth Canadian inside the top-10. At just 59 points out of the lead, seven drivers enter Phoenix with championship hopes depending on their performance this weekend.

Ryan MacDermid came away with the victory both days at Tucson in the Rolison Performance Group Junior Rotax division. The Cambrian Go-Karts / Birel ART driver from Canada stamped his Challenge debut with the two wins, leaving with a 41-point advantage over Hannah Greenemeier. The RPG / Kosmic pilot – starting her second season in the Junior ranks – stood on the podium both days with third on Saturday and runner-up Sunday. The top challenger to MacDermid throughout the weekend was 2015 Challenge Micro Max champion Jak Crawford. The Nash Motorsportz / FA Kart driver nearly pulled off the win Saturday, and contact between the two put Crawford at the tail of the grid for the main event on Sunday. Crawford drove back to finish fifth with fast laps of the race, helping his championship chase odds. Canadian Griffin Dowler (Tony Kart) was the runner-up on Sunday, currently fifth in the standings behind second year Junior driver Cash Tiner (RPG / Tony Kart) 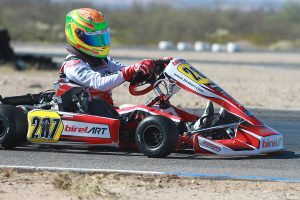 The two wins in Tucson have Ryan MacDermid as the driver to beat in Junior Rotax (Photo: EKN)

The target is set on Billy Cleavelin heading to Phoenix as the Cambrian Go-Karts Rotax Masters point leader. Cleavelin (RPG / Kosmic) was the dominant force throughout the weekend in Tucson, with a loose axle the one hurdle that cost him a weekend sweep. The other, two-time series champion Paul Bonilla. The Full Throttle Karting / Birel ART pilot was the top challenger, however, work conflicts are forcing the SoCal driver to miss the Phoenix event. That puts Chad Wallace as the next driver in line to fight for the championship lead. The BBR / Birel ART driver put in his best overall performance at the Challenge, earning the third step of the podium on Sunday. His BBR counterpart Blake Choquer was strong in his Masters debut at the Challenge, earning the other third place finish in Tucson. One driver to watch is PKRA native Bill Kann. A former winner at the Challenge in 2012, Kann is sure to mix things up with the other front runners.

2016 Rotax Grand Finals Micro Max winner Diego LaRoque began 2017 on top, scoring a sweep of the Tucson weekend in the Brash Racing Mini Max division. LaRoque (BBR / PDB) is ready to welcome the series to his home track, looking for more success. Josh Pierson kept LaRoque from earning a perfect score during the opening weekend. The RPG / Nitro driver scored fast lap in both main events to steal the bonus points away. Just 22 points out of first, a solid weekend in Phoenix can put Pierson at the top of the standings. Dustin Salaverria (Nash Motorsportz / Benik) finished third both days in Tucson, looking for more podium finishes in Phoenix. Local drivers are looking to steal the stage with the Challenge coming to PKRA, including Tommy Traylor (Birel ART), AJ Hernandez (KGB), Tuesday Calderwood (Benik) and Kevin Ryan Boland (Kosmic).

The Podium Karting Micro Max division is going to at least double in size from the Tucson round, with a number of locals competing. For now, everyone will be chasing Sebastian Mulder as the Benik driver scored the victory both days in Tucson, and leads the championship chase. Glendale resident Parker Delong (Benik) sits second, heading to his home track with Tyson Quach (CompKart) holding third in the standings. Jenna McHone (Margay), Tristan Young (Top Kart) and Brock Boyse (Benik) are among the local contingent ready to race for the custom Challenge podium hats from M2 Image Solutions. 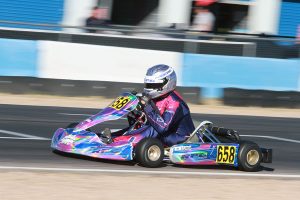 All eyes will be on Billy Cleavelin in Masters Rotax this weekend (Photo: EKN)

Five hundred dollars from M2 Image Solutions is once again on the line for the APM Racing Briggs & Stratton 206 Senior category, won in Tucson by Dutch driver Nick De Bruijn. The field for Phoenix is another good mix of USA and Canadian drivers. Canada took the other two podium spots to shut out USA, with Blake Choquer (PDB) and Griffin Dowler (OTK) earning the other steps. Both are set to compete in Phoenix along with a host of others from Tucson. Making his Challenge debut is Mike McKinney – father of COTA race winner Jim McKinney. The McKinney family are longtime PKRA members, with Mike ready for the seat time now, along with a number of PKRA regulars looking to enjoy the Challenge.

Among them will be EKN’s own David Cole. The Managing Editor is pulling double duty on the weekend. When not focused on the race coverage and EKN Trackside Live production – Cole is set to pilot a Rolison Performance Group Kosmic machine with Briggs power provided by Full Throttle Karting. It will be a full OnTrack article discussing the RPG team, of course the Briggs powerplant, and what it is like competing at the Challenge. Be sure to follow the EKN Social Media outlets – Facebook, Twitter and Instagram – for updates on his weekend along with the entire Challenge of the Americas event at PKRA.