Behind the Laptop: The Karting GOAT

Who do you consider to be the Greatest Of All Time in Karting? 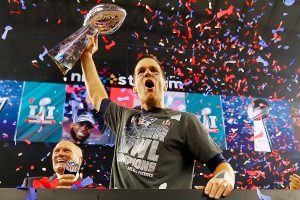 Coming off a historic Super Bowl performance on Sunday, Tom Brady is now considered by many as the GOAT (Greatest Of All Time) quarterback in the National Football League. His five Super Bowl victories put him at #1 in the record books, along with 10 other quarterback benchmarks in the championship game, including four MVP honors.

If we transfer this concept to our sport – who is the GOAT in Karting in the United States?

Our sport is now six decades old, and there have been a number of prominent names in the sport during that time. The basics of the sport have been carried along over that time as well – four wheels and an engine. Technology has changed year to year, from decade to decade, making karts today much more advanced, quicker and, of course, more expensive than those built in the southern California garages in 1956. But the primary goals remain – be the fastest driver on the track and be the first to arrive at the checkered flag. 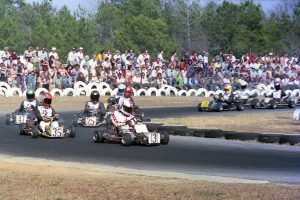 Karting was a lifestyle, and approached differently in the past than in today’s world (Photo: Russ Thompson)

Looking at football, the basic game has remained the same from the time it was created until now, albeit for the same evolution in equipment, rules, and a few other things that have varied from decade to decade. It’s tough to compare the greats from the 1960s and 1970s with those in the NFL today, because the sport is different. The quarterbacks enjoy much more protection in the form of rules that limit contact, and they’re also in constant radio contact with the sidelines and coaching staff. So, stats are the easiest way to compare player to player, and this is where Tom Brady has many around the sport and in the general public believing he is the GOAT quarterback.

The same can be said for karting. The 1960s and 1970s were a different time from today. Karting was more of a lifestyle with racers traveling coast-to-coast with their kart in the back of the car, truck or makeshift hauler, handling the wrenching and fabricating themselves instead of paying a tuner or mechanic, and working during the week just to pay for the weekend trips to the race track. Today, many of the better drivers are out of the sport before they earn their state driver’s license to get behind the wheel of a street car, as a few rare drivers remain in the sport by the time they graduate from high school or college.

Stats are a hard thing to go by in karting. Aside from the personal research and records that I have acquired during my time working at EKN, and the magazine collection sitting in my father’s basement, statistics and history of the sport are not easily accessible. There have been websites or personal pages with race results and championships from years past, and there is no real encyclopedia (Wikipedia page for you millennials) for our sport here in the United States. The two major and oldest sanctioning bodies have a hard enough time keeping their websites updated with current information about upcoming events and news articles to worry about cataloging their history. The newer racing series at least keep a results page section that takes us to the race results and championship standings from within the last decade. 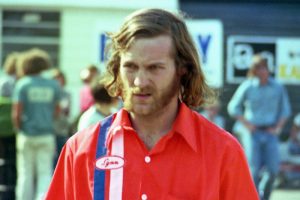 Lynn Haddock is considered by many as the GOAT of karting (Photo: Russ Thompson)

In the ‘golden age’ of the sport, there really was just one national champion – either IKF or WKA. One race group for the style of engines and age level…period. There was not a 10-year-old claiming to have 16 national championships in one season.

The ‘eye test’ is very crucial in determining who are the best in the sport or to narrow down who you believe is the GOAT. With your own eyes, you can see and witness the wins, the championships and, first-hand, the driving talent someone possesses. Prior to my tenure at eKartingNews.com, I was not fortunate enough to venture outside my own little area for karting and see those who came up the ranks when I was a kid and began driving myself. Beginning in 2005, when I traveled to cover national and major events for the website, I was greeted with the opportunity to see some of the top talent that has been involved in the sport over the last 12 years and more. So, from my vantage point, from having personally attended over 150 events over the last 12 years with EKN, here are my top-10 drivers (in no particular order) of my generation or those I have seen first-hand: 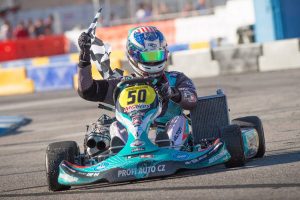 Over the last decade, Gary Carlton is the top shifterkart driver hailing from the US (Photo: On Track Promotions – otp.ca)

Gary Carlton
GFC is by far one of the most talented and hard-working drivers in the United States over the last decade. Carlton’s run began in 2006, winning the Stars of Karting championship and the SKUSA SuperNationals. He repeated the Stars title in 2007 before moving to Europe. Gary has been a fixture at international events since, and returns each and every year to fight for a SuperNationals crown. The victory at the SuperNats in 2015 was an emotional triumph, becoming the first American to win the headline category since his last win in 2006. 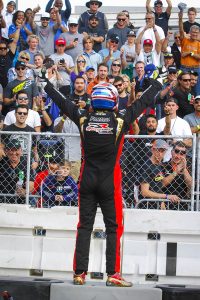 Danny Formal
Today, Danny Formal is the best karter in the United States – living outside the country. Formal, born in Costa Rica, grew up and developed his talents behind the wheel while living in Florida for the majority of his life. He is a four-time US Rotax Grand Nationals champion, and now a two-time winner at the SuperNationals and the reigning S1 SKUSA Pro Tour champion. Put him in anything, and Formal will push the machine to its limits to be the quickest and best driver out on the circuit. I can say with full confidence, Formal is possibly the top driver in the sport today.

Randy Fulks
For decades, Randy Fulks has been garnering victories on the road racing circuits across the country. Fulks – at 62-years-of-age – continues to be among the most talented and successful drivers in the road racing world. ‘Mr. Daytona’ has racked up over 50 victories at the annual Daytona KartWeek and hundreds of wins during his career that spans over five decades. He is still searching for speed every time karts hit the high banks, reaching well over 150mph in his twin-engine laydown machine this past December. 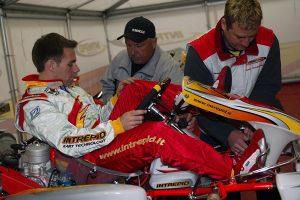 Phil Giebler
During my first full season covering events for EKN, Phil Giebler went on to win the Stars of Karting ICA championship. The following year, Giebler joined the Intrepid factory team at the annual Winter Cup event in Lonato, Italy. Watching him take on the best in the world at the time convinced me of his talent behind the wheel. Prior to that, Giebler was a decorated driver and national champion, including a stint with the factory Tony Kart team in Europe. The 2007 Indy 500 Rookie of the Year has made the transition to Master level racing, and there is no doubt more victories are on the horizon for the California native.

Fritz Leesmann
California has produced a number of talented drivers in the sport of karting. Leesmann is another of those hailing from northern California. The two-time SKUSA Pro Tour champion is a multi-faceted driver, finding success in shifterkart, TaG and even the DD2 Rotax machine. Leesmann was a two-time champion at the Challenge of the Americas in DD2 competition, representing Team USA at the world championships. As we saw in 2015, Fritz still has the natural talent to compete at the top level in the sport.

Jordon Musser
One of the first stars in Rotax competition in the United States was Jordon Musser. Musser won a record-setting three straight Senior titles (2002-2004), adding a DD2 championship in 2006 to become the first four-time US champion. The Texan then transitioned to shifterkart racing, winning the famed Rock Island Grand Prix King of the Streets three times (2009, 2012, 2013) and earning the SKUSA Pro Tour S4 title in 2013. Musser remains a consistent contender in the Master ranks, vying for another title to add to his CV. 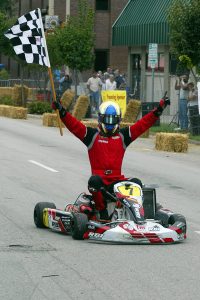 Nick Neri
The first driver to match the Rotax record set by Musser was Nick Neri. Since his early Cadet days, Neri was a championship contender at each and every program he contested. Neri was among the first Mini Max US Rotax Grand National champions (2006). The Florida native followed it up with a Junior title (2009) and, two years later, a Senior victory (2011). In 2014, Neri joined Musser and Formal as a four-time Rotax champion when he added the DD2 crown. When you take into consideration his 2011 SuperNationals S2 victory and his time chasing a championship in S1 in 2014, and its easy to see that Neri is among the most decorated karters of this past decade.

Alan Rudolph
The ‘ageless’ Alan Rudolph is another driver who has driven to success over multiple decades. With success dating back to the 90s, Rudolph has continued to be a fan favorite and contender in anything he jumps in through the last two decades. The five-time Rock Island Grand Prix King of the Streets winner was a long-time favorite in street races – including the Elkhart Grand Prix and Quincy in the Park events, and was among the best during the SKUSA ProMoto Tour days. He also fought for race wins in the Stars of Karting program, and contended for the world championship at the Rotax Grand Finals for three straight years (2012-2014). 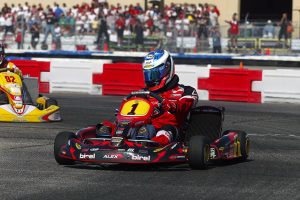 Alex Speed
Extreme natural talent is truly rare. With Alex Speed, it seemed that everything came with ease. This should not diminish the hard work and effort put in by the second-generation driver who scored victory at the SuperNationals on three occasions, and who was a two-time Stars of Karting champion before hanging up the helmet full-time. Alex is considered by many as the better Speed brother behind the wheel, confirmed several times by former F1/NASCAR and current RallyCross driver Scott Speed. Now a fixture at the Ocala Gran Prix operation, Speed is helping to produce the current and future stars of karting and motorsports.

Jordy Vorrath
Another driver we have not seen behind the wheel in many years is Canadian Jordy Vorrath. How is a driver from Canada on this list? Simple. His talent was showcased for many years in the United States. A product of the Italian Motors driver development program, Vorrath was the lead rival to Gary Carlton during his championship years. Many times over, Vorrath was the quicker of the two, however, as Vorrath may have won the battles, Carlton came away with the victories. The Vorrath / Greg Bell tandem was lethal while it lasted, that is, before Jordy hung up his helmet. He now works as a full-time karting mechanic and helped Ryan Kinnear to become the top Masters driver in the country over the last two seasons.

During 2006, EKN began an article series regarding a list compiled by the site viewers as to the top-50 karters of all time. Karters submitted their top-10 drivers, and we collected all the names and rankings submitted to create a top-50 list. Here are those 50 drivers:

If you have a list of the top-10 drivers of your generation, or would like to discuss who you think is the Karting GOAT, submit them to our Forum discussion.