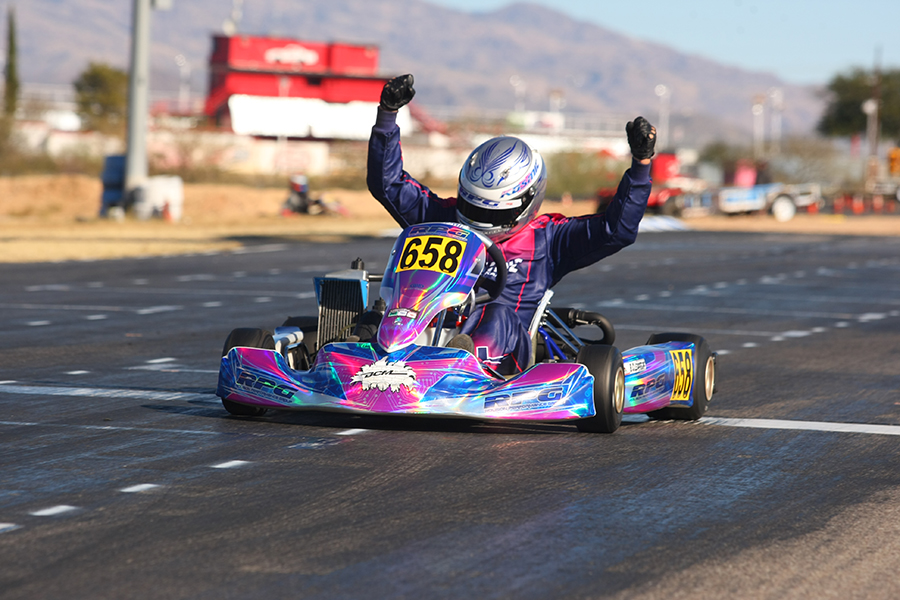 The west coast season kicked off as it has for the past 10 seasons with the launch of the 2017 Challenge of the Americas. The premier winter series in west began the three-event, six-round championship program at the Musselman Honda Circuit in Tucson, Arizona. It was another colder than normal weekend with crisp winds forcing the addition of coats on for much of the weekend, except the skies were clear to allow the bright sunshine to keep the track warm for the exciting two days of racing. The weekend was also one of redemption for veteran racer Billy Cleavelin, who scored both victories in the Masters Max division. 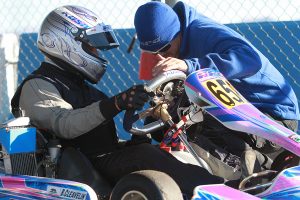 Cleavelin getting updates from RPG’s own Mike Rolison (Photo: EKN)

In 2016, Cleavelin led wire-to-wire in both Finals at the Challenge opener in Tucson, only to be removed in tech inspection for a reed cage violation. The disqualification from the entire weekend cost Cleavelin the opportunity to challenge in the championship chase, with the title winner earning a ticket to the Rotax Grand Finals. Cleavelin would go on to win at the season finale weekend in Sonoma, carrying that momentum over to the US Open to claim a 2016 Rotax Grand Finals ticket. Cleavelin enjoyed every minute of the trip to Sarno, Italy and the Circuito Internazionale di Napoli, competing for the first time in the DD2 Masters division. Each session, Cleavelin was getting quicker, and then the rains came for the Prefinal. He continued fighting, placing 30th in his race and did not qualify for the Final.

The opportunity to represent the United States at the ‘Olympics of Karting’ is the goal in 2017 for Cleavelin. He began that quest with a double win weekend at Tucson to open up the Challenge of the Americas championship chase at the top of the standings. Cleavelin started Round One with the second quickest time in qualifying, just 34 thousandths short of the pace set by two-time series champion Paul Bonilla. Cleavelin took the lead at lap two of the Prefinal, however, pulled off on lap four with a mechanical issue with the axle. That put him 10th on the grid for the 25-lap main event. There was no question the distance provided the Rolison Performance Group / Kosmic driver the opportunity to come from last-to-first, however, no one expected it to happen as quick as it did. After four laps, Cleavelin was in second place and began cutting into the advantage Bonilla established. It was a quick chase, ending by lap 10 with Cleavelin moving into the lead. From there, BC drove to a 3.4-second advantage to claim the victory.

Round Two was a complete sweep of the action for Cleavelin, establishing himself as the driver to be beat for the Challenge title. A fast time of 51.192 seconds put him on the pole position for the Prefinal. Cleavelin cruised to a seven-second gap to take the win and fast lap honors. The 25-lap Final was another perfect drive, leading green-to-checkered for his second victory of the weekend, earning fast lap honors once again.

Cleavelin – turning 60-years-old this July – heads to the second event of the Challenge of the Americas with a 22-point lead over Bonilla. Up next is the tough Phoenix Kart Racing Association in Glendale, Arizona during the February 24-26 weekend. After the Challenge, Cleavelin is planning to compete at the Can-Am Karting Challenge, the US Rotax Grand Nationals in August, the US Open series and possible the Sanzaru Games Karting Championship. Also on his schedule is turning the wrenches for fellow RPG driver Luke Selliken at the Superkarts! USA Pro Tour. 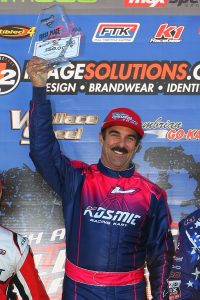 Chassis: Kosmic Mercury
Engine/Engine Builder: Alex Vincent, Kevin Glover
Sponsors: Billy Cleavelin Motorsports, Rolison Performance Group
Series You Compete In: Challenge of the Americas, US Open, Can-Am Karting Challenge, Sanzaru Games Karting Championship
Years Karting: 46
How did you get started in karting?  I had first started with Quarter Midgets and that is where I saw a kart for first time.
What has been the high point in your racing career? That is a tough one. Currently qualifying for the Rotax Grand Finals was awesome.
What are your goals in racing? To qualify again for the Rotax Grand Finals, and make the Main!
In a few words, how would you describe your driving style? Aggressive, Old school
Funniest moment at the race track? 1997 Constructors Cup Formula A. Just changed carburetor and headed back on the track and on my way to the grid. I met this guy by the name of Rob Howden and he volunteered to push start me. Well after about 100 feet I got started and turned around and there’s my new friend chucking up his lunch!

What do you do when not at the track? Relax, Honey Do’s
What are your goals outside of karting? Spend more time with the family, grandkids.
What type of street car do you drive? 2003 GMC Pick Up
What type of street car would you like to drive? New Alfa Romero
What are your pet peeves or things that irritate you? People that don’t use turn signals
What do you think could be done to improve the sport of karting?  Safety. Better race craft. Promoters working with other promoters to improve scheduling.
What are your favorite aspects about the sport of karting ? The people and the equipment.