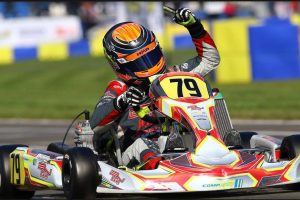 Next week, over 400 drivers will converge on the Le Mans Karting International circuit in France for the 2016 IAME International Final. Five different categories utilizing IAME powerplants are schedule to compete over seven days around the facility positioned alongside the famous 24 Hours du Le Mans circuit. On-track action begins Monday, October 10 with two afternoon practice sessions. A total of four practice sessions for each driver on Tuesday complete the unofficial practice. Wednesday, October 12 is the official start to the event with three non-qualifying practice sessions per class, followed up by qualifying for X30 Senior and X30 Junior – the two categories including drivers from the United States. The categories are then broken up into eight qualifying heat groups, with each driver scheduled to compete in seven heat races from Thursday into Saturday. Points from those events breaks up the fields into A main, B main and C main events scheduled for Sunday, October 16 where the IAME International Final champions of 2016 will be crowned.

David Malukas enjoyed the podium ceremonies last year following his breakout performance. The Illinois native, driving aboard a CompKart, led every on-track session in four days of competition. The 2014 SKUSA Pro Tour TaG Junior champion became the first American to win the IAME International Final. The success sparked the quest to remain competing in Europe, as Malukas has done so throughout the 2016 season. Malukas had driven in the X30 Challenge Europa, CIK-FIA European OKJ Championships, and most recently the WSK Final Cup where he finished 16th as the lone United States driver to make the final. Malukas just celebrated his 15th birthday in September, and is voiding the Junior crown to go after the Senior division. Should Malukas triumph once again, he will become the first driver in IAME International Final history to win a title in two different divisions. 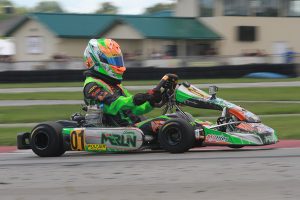 A full field of 144 drivers…that’s right, 144 total drivers…in the X30 Senior division are looking to not let that happen, including fellow American Brandon Lemke. The current United States Pro Kart Series IAME Pro champion is making his third straight start at the IAME International Final, moving up to the Senior ranks after contesting the last two in X30 Junior. Lemke was right there with Malukas throughout the 2015 event, ending up ninth after running as high as third. Lemke has remained in the United States, and is currently in the #1 spot for the EKN Driver Rankings. The Franklin Motorsports / Merlin driver is going back with the same crew, including his father Bill, Jason Birdsell and engine guru Daniel Woltjer. The two have not faced each other since the 2015 SKUSA SuperNationals – where the Pro Tour title was on the line. After five rounds of competition throughout the season, the championship was decided by just one point in the favor of Lemke, who placed 12th as Malukas finished fourth.

Team USA has grown to five for the 2016 IAME International Final, thanks to the addition of three X30 Junior drivers. Merlin Nation is invading France, bringing Sam Mayer and Maks Kowalski with Lemke. Mayer is in his first full season in the Junior ranks, coming up just short of the United States Pro Kart Series IAME Junior crown this year. It was a busy 2016 for Mayer, racing Legend Cars all over the country month to month, while keeping up with his karting schedule. The car racing helped bring him up to speed with the quicker Junior machines, winning twice and placing runner-up in eight races. The championship was lost in a heart-breaking DQ for coming in underweight on Saturday and a DNF after contact on Sunday. This will be Sam’s first trip outside North America to compete. Kowalski is also making his international debut. The Illinois driver is completing his second season in the Junior ranks, highlighted by a fourth-place finish in the Rok Cup USA Midwest championship and eighth at the National Final. The week following the IAME International Final, Maks is traveling down to Italy to compete at the Rok Cup International Final at the famous South Garda Karting facility in Lonato. 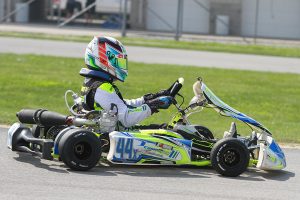 The third X30 Junior driver, making his IAME International Final debut, is CompKart pilot Dante Yu. Just two weekends ago, Yu secured the California ProKart Challenge and is the current Superkarts! USA Pro Tour championship leader, heading into next month’s SKUSA SuperNationals 20. Dante has traveled over the Atlantic to compete in the X30 Challenge Europa program, coming away with mixed results but great knowledge for the competition level and what it takes to succeed at the international stage.

eKartingNews.com will be following the event all week long, posting daily reports and updates on the social media pages. To find out more about the IAME International Final, visit X30world.com