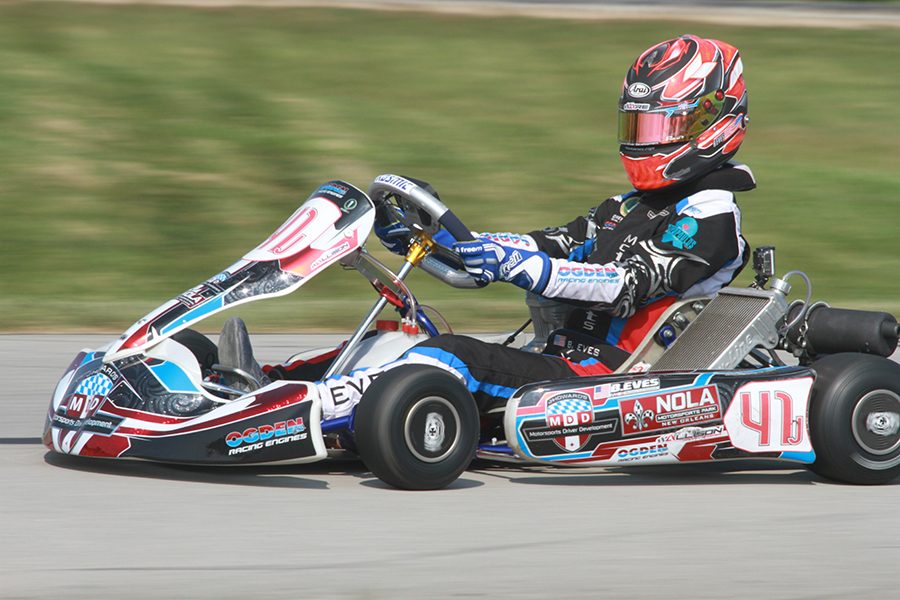 The 2016 WKA Manufacturers Cup Series is completing this season with the Top Kart USA Grand Nationals at the New Castle Motorsports Park. Saturday was the ninth round of the season championship, and the first day of eight WKA Eagles awarded to the winners of the main events. The day began with a gloomy sky over the 1-mile circuit and eventually, the clouds parted and the sun shined on the competitors with a clean day of racing.

The KartSport North America Pro IAME Senior division was among those that featured great racing. For 11 of the competitors, it was a day chasing Braden Eves. The Kosmic driver was perfect on the day, leading from qualifying to the final checkered flag. After two solid heat races, it was a battle in the main event with challenge from Brandon Jarsocrak (Praga) and Brandon Lemke (Merlin). Jarsocrak got the jump at the drop of the green flag from the outside of row one, leading the first seven circuits. From there, it triggered some shuffling up front. Lemke lost the draft about the midway point, but thanks to the back and forth of Eves and Jarsocrak, the former Triple Crown driver closed back in. Lemke led as the trio took the white flag and down to the I-70 corner. Eves made a move with Jarsocrak trying to find a way through with Lemke fighting to hold both off. Eves got the best run out of the corner, beating the other two to the checkered flag first for his third victory on the year, all at the New Castle facility. Lemke settled for second with Jarsocrak notching another third place result. Jonathan Kotyk (Top Kart) made his return back behind the wheel a successful one, finishing fourth ahead local driver Mick Gabriel (Tony Kart). 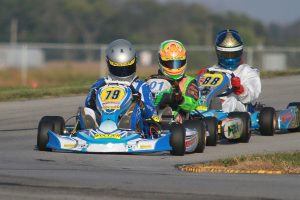 Dakota Pesek was able to score the win in the Yamaha Senior final (Photo: EKN)

Eves had a chance for another sweep in the Fullerton Karts USA Yamaha Senior division. In his FA Kart, Eves posted fast time in qualifying and crossed the line first in both heat races. The main event was nothing close to easy, with six driver jostling for position every lap. Emerson Reed (Top Kart), making his 2016 debut, led early until the change for position including the top spot. Brandon Lemke (Merlin), Dakota Pesek (Top Kart) and Eves all took their turn at the point. It came down to Pesek and Reed in the end. Reed jumped at the chance to lead the final circuit, diving to the spot as the final circuit began. Pesek settled in and waiting until the I-70 corner to make his move. The two then drag raced to the checkered flag, as Pesek edged out Reed by just eight thousandths of a second. NCMP legend Billy Lewis (Arrow) outran Lemke to the line for third with Jake Venberg (Merlin) holding off Eves for the fifth spot.

The day belonged to recent Rok Cup USA champ Tyler Gonzalez, making his first start in the Woltjer Racing Engines Pro IAME Junior division. The Florida driver went perfect on the day, sweeping the action en route to an astonishing six-second victory. The Tony Kart driver led the eight laps in both heat races, and then the 14 circuits in the main event for the victory. The fight for second was the battle on the race track with championship leader Pauly Massimino (Top Kart) beating Tahlon Yockel (Tony Kart) and Max Peichel (Top Kart). Jacob Abel (Tony Kart) won the battle for fifth over Lance Fenderson (Tony Kart) and Tyler Ferris (Top Kart).

It was anybody’s day in the FranklinKart.com Yamaha Junior division. First, Caiden Young (Top Kart) laid down a monster lap to take the fast time in qualifying. Ian Hornish (Tony Kart) drove his butt off to score the win in Heat #1, while JP Southern (Top Kart) knifed his way to P1 in the second heat. That shuffled up the grid for the main event, and in the opening laps, some contact continued that jostling up the field more with Southern eventually emerging with the lead. Southern led 13 of the 14 laps to take the checkered flag first. Officials however penalized him to finish behind Tyler Ferris (Top Kart) for contact, placing them eighth and ninth. That gave Pauly Massimino (Top Kart) his first victory of the season, helping his cause in the championship chase. Colin Neal (Tony Kart) was promoted to second with Hornish earning his best finish of the season in third. Young and Arie Venberg (Merlin) capped off the top-five. 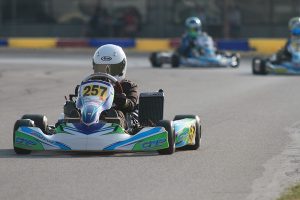 There was no clear-cut favorite during the day in the IAME East USA Pro Swift Sportsman category. Jason Welage (Top Kart) made his return to competition by notching fast time in qualifying and winning the opening heat race. Barbados driver Zane Maloney (Formula K) came through to win the second heat, joining Welage on the front row for the main event grid. The driver on the charge in the 14-lap race however was Devin Gomez (Benik), starting sixth. He along with Benik teammate and championship leader Luca Mars jumped to the front and pulled away from the rest of the field. Mars led from lap five until the final circuit when Gomez made his move. The two went back and forth on the final lap, with Gomez securing the final play in the last corner. Gomez reached the checkered flag first – by just four hundredths of a second – for his second victory in the series. Mars settled for second, earning another solid points day toward the championship. Kaden Wharff (Top Kart) beat Welage for the third step on the podium with Maloney in the fifth spot.

It was something similar in the Allison Racing Engines Yamaha Sportsman division with Sam Hinds (FA Kart), Kaden Wharff (Top Kart) and Madison Campeau (Top Kart) at the front of the field. Hinds was shuffled back during the heat races with the two race winner eventually pulling away from the field in the main event. Wharff was leading on the final circuit when he dropped a wheel on the exit of the ‘Green’ corner, handing the lead to Campeau. Wharff’s momentum was thrown off just enough that he was unable to challenge at the I-70 corner and try to drag race to the checkered. Campeau made zero mistakes in the final two corners, reaching the flags first for her second victory of the season to help add to her point lead. Wharff settled for second with Garrett Adams (FA Kart) a close third. Thomas Schrage (Tony Kart) and Logan Adams (FA Kart) finished fourth and fifth. 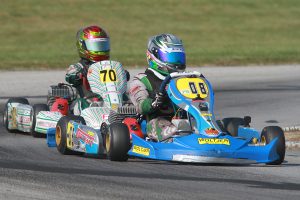 The CRPRacing.com Mini Swift came down to a photo finish like no other. Five-time race winner Jeremy Fletcher (Kosmic) won both heat races after Caleb Gafrarar (Parolin) set fast time in qualifying. The two were joined by Eli Trull (Fullerton) at the front, with the three championship contenders deciding the victory for Round Nine. Gafrarar led with Trull and Fletcher buying their time for the final circuit. At I-70, Trull worked around Gafrarar for the lead. However, Caleb got a great run on the exit and pulled alongside Trull as they made their way toward the checkered flag. Trull pushed Gafrarar from one side of the track to the other, pushing him into the grass. With two wheels in the green, Gafrarar never lifted, and was able to reach the stripe first by 16 thousandths of a second. Fletcher was classified second with Trull crossing the line in third, 58 thousandths back. Danny Dyszelski (Vemme) placed fourth with Sebastian Ng (Top Kart) in fifth.

Austin Olds swept the day in the Water for a Cause Kid Kart division. Olds led 13 of the 14 laps in the main event to score his second victory of the season. Championship leader Indy Ragan came up just short to place second with Karsyn Walters joining them on the podium. Tristan Young and CJ Bowman completed the top-five.