The final chapter of the 2016 Fikse Wheels United States Pro Kart Series presented by MG Tires is set for the September 9-11 weekend in Wampum, Pennsylvania. Eight categories will close out the season with the final two rounds – presented by Checkered Motorsports – contested at the Pittsburgh International Race Complex. Site of the inaugural series finale in 2013, the ‘Alan Wilson Circuit’ has a fresh coat of pavement and new curbs to welcome the IAME and Yamaha competitors. Following the action on the weekend, the USPKS – thanks to its many supporters – is set to award the final portions of the $100,000 prize package for the 2016 season. 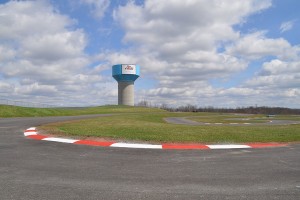 Online registration is remaining open for the USPKS Pittsburgh event until September 5 at Noon. Series officials have kept the ‘early entry rate’ open until this deadline, available for $300 that includes Friday practice, Saturday race and Sunday race fees. for the entire weekend for the non-Pro categories with $50 additionally for IAME Pro and Yamaha Pro. Competitors can head over to the Online Registration page of the USPKS website. A reminder to racers, the format is a bit different during the final weekend. Friday includes the full five rounds of practice along with the complimentary cookout sponsored by CompKart and cornhole tournament. Saturday is the normal format of warm-up, qualifying, two heat races and main event to complete Round Seven of the season. Round Eight on Sunday is adjusted with warm-up, qualifying, a Prefinal and Final. The Champions Banquet is scheduled to begin at 4:00pm that afternoon, presenting the top-five in all eight categories with their season-ending awards. A full weekend timeline can be found at the USPKS.com website.

The Fikse Wheels United States Pro Kart Series recognizes the top-five drivers in all eight categories, with each driver receiving a championship position trophy, a new set of MG Tires, and gift certificates that total $18,000. All eight championship drivers receive a customized ring and suit to commemorate their accomplishment for the 2016 season, while the eight vice-champions are awarded a special MG Tires jacket. 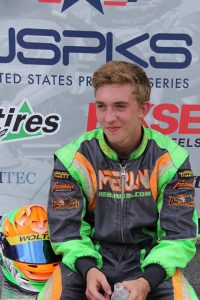 The champion in the IAME 125 Pro division also receives an all-expense paid trip to the Granja Viana 500 in Brazil courtesy of WR Motorsports. The annual 500-mile endurance event attracts the biggest names in motorsports from native Brazil and around the world. One air ticket round trip, transportation, four hotel nights, race entry, and part of the WR Motorsports team with everything included for the December event estimated at around $6,000.

Adding to the prizes shelled out during the year-end prize ceremony on September 11 is IAME USA East. Each of the four IAME class champions will receive a FREE IAME engine, with the Pro and Junior gifted a X30 powerplant and the Cadet and Rookie title winners handed a Swift engine, total nearing the $10,000 mark. At the season banquet, KartLift is also raffling off a customized pit box, one of the most sought-after prizes at the ceremony. Over $7,500 worth of gas grills courtesy of Weber, Napoleon, the Big Green Egg and Marx Fireplaces & Lighting.
A fourth different champion is set to be crowned in the Franklin Motorsports IAME Pro division with the three previous champions not part of the 2016 program. 2015 double Junior title winner Brandon Lemke has stepped up in his rookie season, winning four of the six main events to establish a sizable lead going into the series finale. The only two other winners on the year – Braden Eves and Zach Holden – sit second and third in the standings. Second thru sixth are separated by less than 100 points with Brandon Jarsocrak, Ryan Norberg and Austin Garrison looking to land on the championship podium. Lemke and Holden are right there in the Comet Racing Engines Yamaha Pro championship chase, both trailing Dakota Pesek. A front runner for the past three season, Pesek’s four victories give him a 181-point advantage going to Pittsburgh. 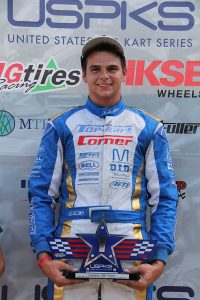 Sam Mayer and Alex Bertagnoli are the drivers to beat in the Junior ranks. Mayer is the top driver in the Innovative Performance IAME Junior and the Woltjer Racing Engines Yamaha Junior standings with Bertagnoli in second. The gap is just 13 points in IAME despite Alex having three wins to Mayer’s two. Lance Fenderson has an outside chance at stealing the title, back by 218 markers. Mayer, a 2013 USPKS Cadet champion, holds a larger advantage in Yamaha with Bertagnoli back by 117 points with the win scorecard 2-1 in favor of Sam.

Four-time race winner Reece Gold holds the championship lead in the Allison Racing Engines IAME Swift Cadet standings, but only by a small margin due to his two poor finishes. This has kept Tyler Maxson in the hunt, just 45 points back thanks to his five top-five finishes in six races. Garrett Adams spent the Mooresville event in the hospital with a bad infection and his brother Logan Adams help him secure the top spot in the Switch Racing Engines Yamaha Cadet title chase. Logan drove as a substitute throughout the weekend, helping to establish a 203-point lead for Garrett heading into the finale. Kyle Thome, Kaden Wharff and Nicholas Terlecki are looking to cut into that advantage over the two days of racing in Pittsburgh. Brent Crews is set to wrap up the championship in the Jay Howard’s Motorsports Driver Development IAME Swift Rookie division. Five feature wins have helped Crews to establish a 304-point lead over Paige Crawford. In the QPS Employment Group Yamaha Rookie, Crawford is the driver to beat in the championship as Elliot Cox sits just 88 points back.

For more information on the Fikse Wheels United States Pro Kart Series presented by MG Tires, visit them online at www.USPKS.com,follow them on Facebook, or contact Mark Coats via e-mail mcoats.uspks@gmail.com or call 217-652-6275.