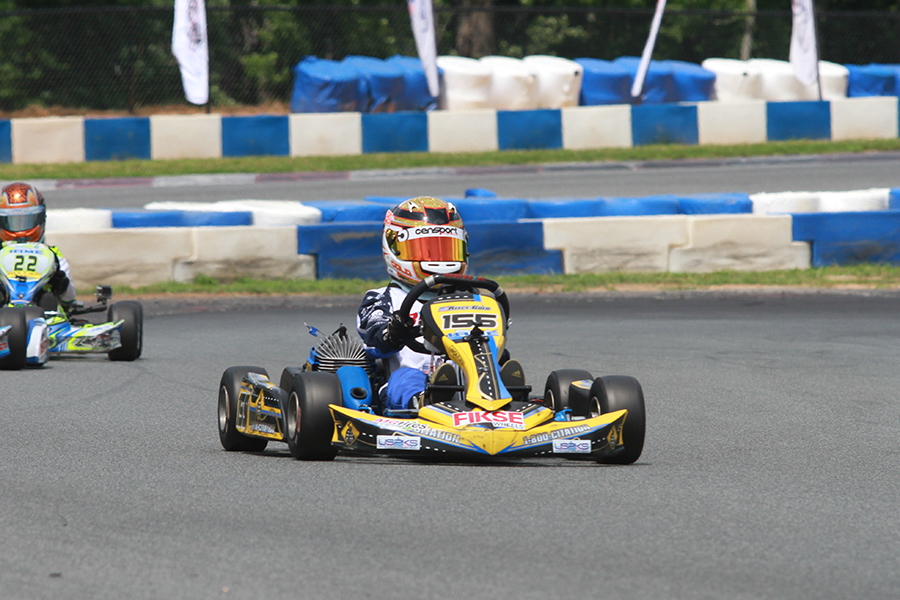 Gold began a five race win streak for the month of July with his fourth victory on the year at the USPKS event in Mooresville (Photo: EKN)

Over the last decade, we have seen a number of Cadet drivers become a dominant force at their age level. Sage Karam, Colton Herta, Anthony Gangi Jr., Brandon Lemke, and Dylan Tavella all became multi-time champions and have risen up the karting ladders. A number of drivers under the age of 13 are racing each and every weekend across the country, developing their skills to be considered as good, if not better, than those names listed. Florida driver Reece Gold is making a solid case for his efforts in 2016, including a dominant month of July that saw him win five of six main events in three straight weekends against the best of the best.

Gold’s month began with his continuing bid toward the United States Pro Kart Series championship, holding their third event of the season at the GoPro Motorplex in Mooresville, NC. The weekend following the Fourth of July celebration brought in some warm temperatures that drivers had to battle all weekend long. Those in the IAME Cadet chased Gold in the previous three rounds where he came away with the main event victories to place him as the championship leader. After qualifying ninth for Saturday’s round of racing, Gold worked his way forward, and was leading by the beginning of the main event. The Benik driver led the first 13 laps until contact with his teammate at the fast monza corner took both out of contention for the victory.

That would be the only main event blemish over the three weeks. Gold returned the following day to nearly sweep the round. Reece took fast time in qualifying and during the ‘cool down’ lap was involved in an incident, flipping his kart over. His Benik crew got his kart ready for the opening heat, placing second to teammate Santiago Trisini. Gold went on to win Heat #2 and fight off local favorites Gray Leadbetter and Saturday winner William Robusto for the first victory of the month.

A week later Gold made his WKA Bridgestone Manufacturers Cup Series debut in the Pro Swift Sportsman division, holding the first of two events at the New Castle Motorsports Park in Indiana this year. Saturday began by securing the fast time in qualifying before relinquishing the top spot in the heat races to Elio Giovane. Gold reassumed the top spot, leading 13 of the 14 laps to secure his first WKA victory in 2016, edging out Kaden Wharff by just 18 thousandths of a second. Sunday was all Gold, sweeping the round to earn a second victory on the weekend. Reece was challenged early until running away with the Heat #2 win and then dominated the feature to a five-second advantage after 14 laps, becoming the first driver to win multiple feature races.

The third weekend brought Gold back to the New Castle facility for the seventh running of the Superkarts! USA Pro Tour SummerNationals. After missing the SpringNationals in Phoenix, Gold was making his SKUSA debut for 2016. Reece secured the top spot in Round Three qualifying against the 34-driver field. He lost to a four-driver photo finish, placing fourth after leading during the eight-lap race. Gold was shuffled back early in Heat #2, and was spun around on lap four to drop him out of the top-15. He fought back to 11th to start inside row six of the main event. Sixteen laps in the main event was enough time for Gold to fight his way forward. Reece was able to catch Benik teammates Luca Mars and Tyler Maxson and in just four laps, took over the lead. The battle for second allowed Gold to pull away, earning his first Pro Tour victory.

Sunday’s performance was one of the greatest drives of the season, if not in Pro Tour history. Gold qualified a disappointing ninth, and was only able to gain one spot in Heat #1. Contact at the start of Heat #2 dropped him down to the tail of the field, placing 28th to start from Row 14 for the main event. Gold navigated his Benik like it was in another speed zone, gradually passing karts one by one until reaching the top-10 at the halfway point. Once there, it was another one-by-one set-up as Gold continued to move up the order. With two laps remaining, Reece was behind teammates Diego LaRoque and Tyler Maxson, working past both on the same lap to take over the lead. Gold was able to get away in the final laps as they fought for the runner-up position, completing a 28th to first triumph for the victory.

Gold is the championship leader in the United States Pro Kart Series IAME Cadet division, with the finale set for September 9-11 at Pittsburgh International Race Complex. Before that, Reece will look to lock up the Rok Cup USA Midwest championship at New Castle Motorsports Park on August 26-28. Then it’s back to Orlando Kart Center for the Rok Cup USA National Final. In October, Gold is set to travel to Italy to compete in his first international events – the Bridgestone Cup and the Rok Cup International Final at the famed South Garda Karting facility in Lonato. November, Gold will attempt for his third SKUSA Pro Tour victory of the season at the 20th Superkarts! USA SuperNationals. 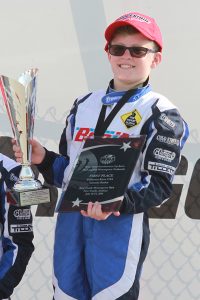 Chassis: Benik Kart
Engine/Engine Builder: Woljter Engines and AM Engines
Sponsors: The Ticket Clinic, A Law Firm
Series You Compete In: Superkarts! USA, United States Pro Kart Series, Florida Winter Tour, Rok Cup USA
Years Karting: 7 Years
How did you get started in karting? My Dad raced cars and he took me to most of his races. And then on my 5th birthday he bought me a Kid Kart.
What has been the high point in your racing career? Sweeping SKUSA and USPKS and coming from 11th to first and 28th to first at New Castle
What are your goals in racing? To make it to F1
In a few words, how would you describe your driving style? Smart, Smooth, and Clean
Funniest moment at the race track? Was probably just all the funny stuff me and friends do because there are so many funny things we do.

What do you do when not at the track? Play Basektball and play Racing Games
What are your goals outside of karting? To be an Architect or a Lawyer
What app or game do you play a lot of right now? F1 2016 and Project Cars
What type of street car would you like to drive? Bugatti Chiron
What are your pet peeves or things that irritate you? People who say I win because of either a draft or a certain setup
What do you think could be done to improve the sport of karting? Its already really good but I think an idea is spread everybody out by about 2 seconds in qualifying
What are your favorite aspects about the sport of karting? The fun on and off the track and the intensity of all the races