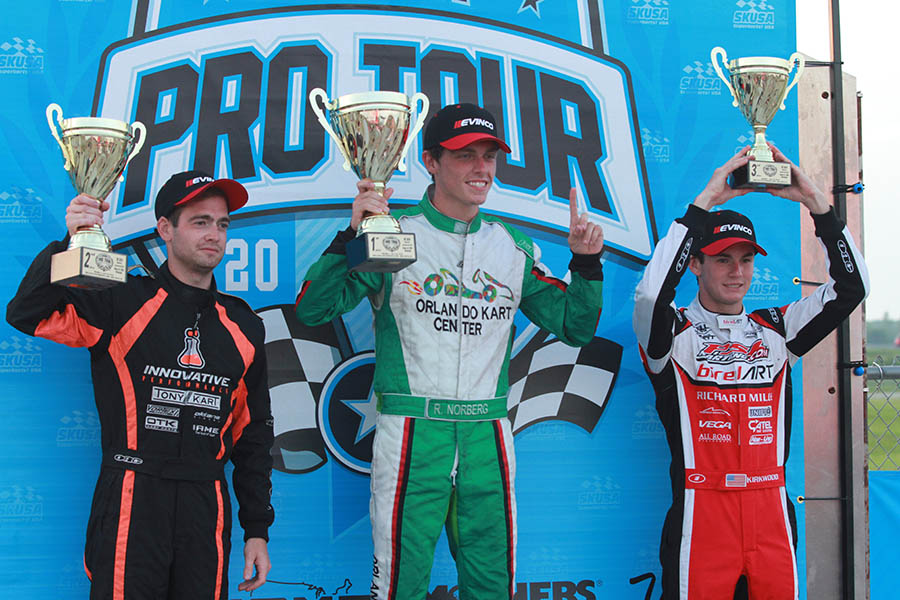 The 2016 Superkarts! USA SummerNationals completed Sunday at the New Castle Motorsports Park. Over 100 degree temperatures were felt throughout the day, as the on-track staff and competitors battled humid conditions for nearly 12-hours, completing the fourth round of the SKUSA Pro Tour championship. Overall, the weekend was a success with over 250 entries for the nine categories and well over $10,000 in cash and prizes handed out. Success was earned all weekend for new TB Kart driver AJ Myers, sweeping the main events on the weekend in the S1 Pro division while Ryan Norberg was awarded the victory in X30 Senior following penalties in the main event. 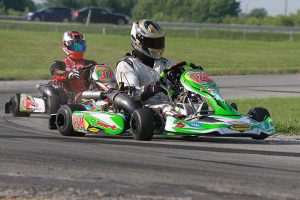 AJ Myers ran away with the S1 victory making it two on the weekend (Photo: EKN)

Two-time race winner Ryan Norberg (Tony Kart) and national racing frontrunner Kyle Kirkwood (PSL Karting / Birel ART) were the class of the Nash Motorsportz / CRG Nordam X30 Senior field on Sunday. Kirkwood took the top honors in qualifying before splitting the heat races wins with Norberg. At the start of the main, the Florida drivers worked together to pull away from the 44-kart field, leaving Brandon Jarsocrak (KSNA / Praga) alone in the third position with a multi-driver fight on track for fourth. Kirkwood set the pace for 19 laps of the main event. Norberg kept up the pressure, but was unable to work past before the checkered flag. Kirkwood crossed the line first, believing he had won his first Pro Tour victory. Officials, however, penalized Kirkwood two positions for blocking, handing the win to Norberg, along with the overall weekend win for the $1,000 payday. The podium shook up more with two positions added to Jarsocrak after he was penalized for pushing at the start. This promoted TJ Koyen to the second position, who had worked his way up from 15th in qualifying. It was a no-quit attitude for the Innovative Performance / Exprit driver, continuing to knife his was forward throughout the day after a very tough Saturday. In the end, Kirkwood was demoted to third on the podium as a result of the penalty. Louie Pagano (2Wild Karting / Tony Kart) was fourth ahead of Jarsocrak, Braden Eves (MDD / Kosmic) and Nicky Hays (PGR / Ricciardo), who put in a solid effort to finish seventh. 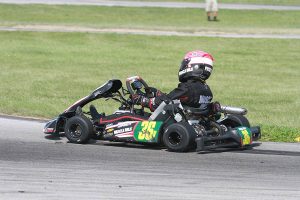 There was no stopping AJ Myers in the PSL Karting S1 Pro Stock Moto category, sweeping the action on Sunday to secure his a second victory on the weekend. Myers put his TB Kart at the top of the qualifying sheet before walking away to the opening heat race win. The Saturday winner came under challenge in Heat #2, emerging as the race winner despite the fact that Jake French (DKC / SodiKart) and Danny Formal (DRT Racing / DR Kart) applied extreme pressure. The holeshot was all Myers needed in the main to secure his second Pro Tour victory, getting out and in front of the field to begin the 20-lap main event. While he was not the outright fastest driver on the track, Myers remained consistent to keep Formal from challenging, as they placed 1-2. Myers took home the $1,000 payday for most points on the weekend. French settled for third on the podium, bouncing back from having a podium finish taken away on Saturday due to a mechanical issue. Round Two winner Daniel Bray (GP) fought to a fourth place finish, demoting fellow former Pro Tour champion Joey Wimsett (PGR / Ricciardo Kart) to fifth. 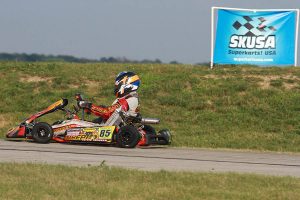 Ryan Kinnear doubled up in the win column, making him the title contender in S4 (Photo: EKN)

The championship has tightened up for the 3G Kart Racing S2 Semi-Pro Stock Moto category, welcoming Hunter Pickett as the fourth different winner on the season. The Aluminos driver fought forward throughout the day, coming out as the victor and setting up for a great chase for the championship heading to the 20th running of the SuperNationals this November. DKC / SodiKart drivers Austin Wilkins and Sky Finley posted identical fast times in qualifying (1:02.851) to fill out the front row. Each took a win in the heat races, positioning them as favorites heading into the main event. Pickett started fourth and slotted himself third after the opening lap. Once around Finley, Pickett ran down and worked past Wilkins for the lead. Pickett kept the Texan behind him all the way to the checkered flag, notching his first Pro Tour victory. Wilkins settled for second, earning most points on the weekend for a $500 payday. Finley ran third with Saturday winner Kyle Kalish (Franklin Motorsports / Merlin) slotted in fourth ahead of Jamaican Collin Daley (DRT Racing / DR Kart). 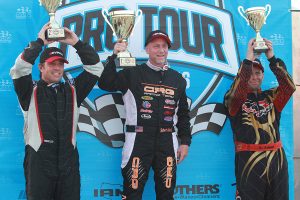 The same three drivers set the pace on Sunday in the Phil Giebler Racing / Ricciardo Kart S4 Master Stock Moto class. Defending champion Jimmy McNeil (PKS / CRG) posted the fast time in qualifying while Round One winner Jordon Musser (3G Kart Racing / Intrepid) and Saturday victor Ryan Kinnear (Champion Racing / Intrepid) split the heat races. The trio pulled away from the field once again in the main event, with Kinnear grabbing the holeshot. That was all he needed, as Kinnear led all 20 laps for his second victory on the weekend, placing himself as the frontrunner for the title heading into Las Vegas. Neither of the challengers were able to be as consistent as Kinnear, but Musser was able to steal second away from McNeil in the late going. Byron Rothenhoefer (Formula K) was able to hold off Round Two winner Alan Michel (MRC / Praga) for his best Pro Tour finish in fourth. Robert Marks (PKS / CRG) came back from a tough Saturday to earn his second Mad Old Nut Racing S4 Super Master Stock Moto victory on the season. Marks held off Texas driver Rod Clinard (CRG Nordam) with Lance Lane (DRT Racing / DR Kart) on the podium in third. Darrell Tunnell (PKS / CRG) finished fourth with point leader and Saturday race winner Nick Firestone (DRT Racing / DR Kart) in fifth. 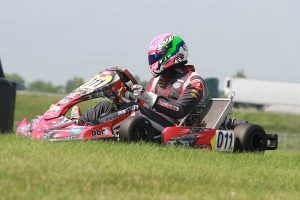 Sunday brought on a new look at the front of the Parolin Racing Kart X30 Master division, including a new winner in Marios Barrios. The BBR / Gillard driver and team did their homework overnight to come out and sweep the day. Barrios set fast time in qualifying and won both heat races. Championship leader Derek Wang (BBR / FA Kart) was able to lead the opening lap until he was shuffled back. Barrios retook the lead and was then chased by two-time Pro Tour champion Ethan Wilson (PGR / FA Kart) as the lead challenger. Wilson both lost and closed ground on Barrios over the 18-lap event, but he was unable to mount a real challenge at any time. At the checkered flag, Barrios secured his first Pro Tour victory by one-second over Wilson. Wang completed the podium as Saturday winner Erik Jackson (MMK) and Jim Russell Jr. (RKS / Parolin) completed the top-five. 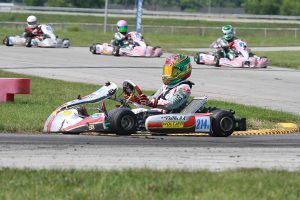 Another great drive by Dylan Tavella gave him win number two on the weekend in X30 Junior (Photo: EKN)

The ‘Dylan Tavella’ we are all used to seeing is now back, as the confidence and speed has returned, as witnessed by a double-win weekend in the Pure Karting X30 Junior class. Now in his second year as a Junior, Tavella set fast time in qualifying and won the opening heat race, only to be penalized two positions for scrubbing his tires past the commitment cone. The IRR / Tony Kart driver fought back to win the second heat race, earning the main event pole position. He and Dante Yu (J3 Competition / CompKart) broke away from the field on Sunday afternoon. Each took a turn at the point, but in the end, Tavella came out the victor. The fight for third was hard fought early until Zoey Edenholm (Koene USA / Tony Kart) came away with the position. Arthur Leist (Kosmic) came from 31st on the grid to end up fourth while Stephen Dial (Franklin Motorsports / Merlin) placed a respectable fifth. 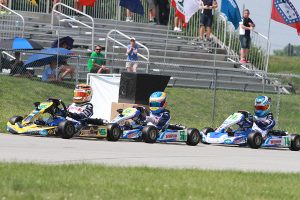 There is no question throughout the karting community that Reece Gold is among the top Cadet drivers in the nation. The Benik driver proved it once again with an amazing drive to victory in Top Kart USA Mini Swift on Sunday. Gold struggled early on in the day, and was involved in contact during the start of Heat #2, placing him 28th for a Row 14 spot in the main event. It was like he and the kart were in a higher speed range, as Reece knifed his way through the pack with clean, precise maneuvers to climb up the order. By lap 13 of the 16-lap main event, he was into the top-five. Coming to the white flag, he went from third to first, and was able to escape the rest of the lead group as they fought for position instead of working against him. Gold pulled away to a 1.6-second advantage at the checkered flag for his second victory of the weekend. Thomas Nepveu (PSL Karting / Birel ART) slotted himself into second with Kyle Thome (Franklin Motorsports / Merlin) in third. Devin Gomez (Benik) and Nicholas Terlecki (PSL Karting / Birel ART) completed the top-five. 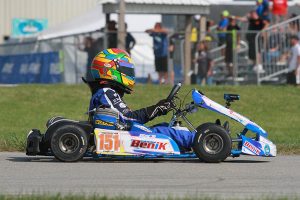 A big victory for Elliot Cox in the Micro Swift division (Photo: EKN)

The Benik Kart Micro Swift came down to a photo finish. After a great 16-lap main event by the youngest group of the Superkarts! USA Pro Tour, Indiana’s own Elliot Cox (Benik) was able to reach the checkered flag first ahead of Kai Sorensen (Praga) by 48 thousandths of a second. Alex Powell (Birel ART) crossed the line in third with Brandon Carr (Benik) and Piers Aspiras (Ricciardo Kart) ending up fourth and fifth.

For complete coverage of the entire weekend, head over to the EKN Event Page.