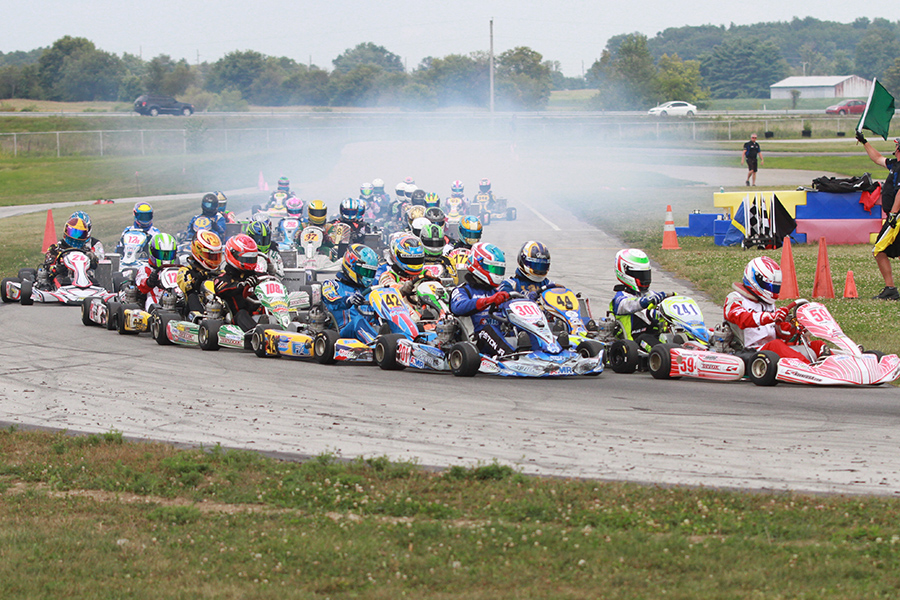 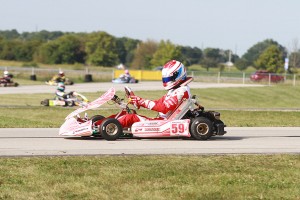 The IAME Pro division has been among the biggest fields in North American karting for the past three seasons, vying for the $1,000 to win in each of the eight main events once again. Three different drivers have conquered the eight-race championship program to earn the title, with another slate of drivers set to add their name to the list of United States Pro Kart Series champions. The field is projected to reach the 30-driver mark for the 11th time in the 13 USPKS events.

The newest name added to the list of champions at the end of 2015 was Elliot Finlayson. The Koene USA / Tony Kart driver used consistent results in the second half of the season with five straight top-three finishes to climb his way to the top of the championship standings. Now the defending champion, the pressure and target is on the Illinois driver who has two wins in the last 1.5 years – USPKS 2014 Finale at New Castle and Day 1 at WKA Daytona KartWeek 2015.

Coming just short of the title was 2014 Yamaha Pro title winner Brandon Jarsocrak. ‘Money’ started out as the championship leader, but lost it following tough weekends in Shawano and South Bend. Now with KartSport North America aboard a Praga, the Pennsylvania driver is set to contest once again for the championship. The other former USPKS champion is 2014 title winner AJ Myers. The Floridian is among the top drivers in the country, and set to contest the season aboard the successful iKart machine, manufactured just down the road in Indianapolis.

There is no hotter driver right now then Ryan Norberg. Wins in his home state of Florida against international contenders, a double win weekend at the WKA Manufacturers Cup Series event in North Carolina, and a dominating performance at the SKUSA SpringNationals has the OKC / Tony Kart driver as the rising star. Norberg finished fourth last season in the USPKS standings as the top rookie, including a big win in South Bend. Next to him is fellow SpringNats winner Braden Eves, coming off the biggest victory of his young career. The MDD / Kosmic pilot moved up to Senior at the mid-point of the USPKS season in 2015, coming away with two top qualifier honors but was unable to translate that into podium success. Now with more time under his belt the Ohio driver is looking to become a regular contender.

Andrew Bujdoso (Checkered Motorsports / PCR) is another returning championship contender, along with Michael Geringer (Franklin Motorsports / Merlin). The ageless TJ Koyen spent last season competing in the Yamaha Pro division and is making the jump back over to IAME Pro. The Innovative Performance / Expirit driver won both main events of the Route 66 Sprint Series event just a few weeks ago. 2015 USPKS Yamaha Pro champion Mike McAndrews is set for a full campaign in the IAME Pro division, running with Fullerton USA and piloting a chassis designed by former world champion Terry Fullerton.

Two high-profile drivers are set to make their USPKS debut this weekend. Jake Craig was the EKN TaG Driver Rankings #1 in 2014 following a championship season on the SKUSA Pro Tour and winning the US Rotax Grand Nationals. The Californian is now driving under the Praga North America tent, replacing the seat of Andrick Zeen – who won both New Castle main events to close out the 2015 season. Florida pilot Austin Garrison has just signed on with COMPKART under the J3 Competition tent, leaving his longtime home with Ocala Gran Prix. The 2014 US Rotax Grand Nationals champion is among the most talented drivers in North America, set for a weekend of firsts in New Castle.

Two standout rookies are set to make their USPKS Senior debuts at New Castle. Brandon Lemke won both Junior titles in 2015 with a ‘perfect’ record in the IAME division be it not for a questionable penalty at the season finale. The Franklin Motorsports / Merlin driver will be among the favorites, along with two-time USPKS Yamaha Junior champ Zach Holden. The Koene USA / Tony Kart pilot finished vice-champion to Lemke in both categories a year ago. The two will continue their rivalry into the Senior ranks, making the USPKS IAME Pro field among the best in the country. 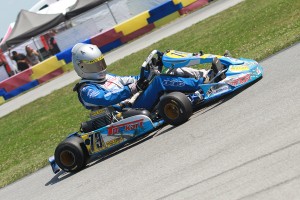 Dakota Pesek is the led contender in Yamaha Pro heading into the 2016 USPKS season (Photo: EKN)

The Yamaha division has seen respectable numbers throughout the first three years of the USPKS. Many of the same drivers have been there fighting for the title. All three previous champions have moved on after scoring the title, dismissing the chance at a repeat. Last year’s title winner Mike McAndrews is no different, focusing his attention on an IAME Pro campaign. This leaves Top Kart USA driver Dakota Pesek as the lead contender for the crown. The Ohio pilot finished third in 2014 championship chase and runner-up a year ago. Both seasons, Pesek has stood on top of the podium twice and will need that or more to move that one step further in the championship.

Jake McWhirter (Tony Kart) has shown the speed the past two seasons to contend for podium positions, and is among those returning along with Daytona KartWeek winner Nick Landi (Tony Kart) and Adam Crepin (Tony Kart). Veteran Darin Marcus (Tony Kart) is taking his chance in the Yamaha division once again, along with WKA Triple Crown Mike Giessen (Birel).